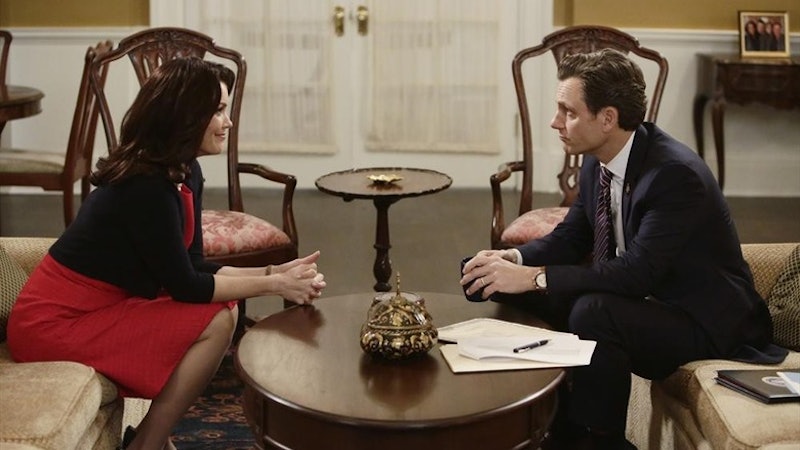 Mellie Grant has always been arguably the most ambitious character on a show full of power hungry megalomaniacs. But on this week's Scandal we all got a taste of what kind of presidential candidate Mellie might be, now that she's officially set her sights on running, and so far she's even more commanding than we might have expected. She's also not at all what you think when you picture your average female candidate, and that's a good thing.

Scandal is no stranger to having women run for president. Last year Olivia Pope was managing the primary run of one Josie Marcus, who could have gone all the way to the White House if her sister hadn't inadvertently sabotaged her efforts. We also saw Sally Langston give up the vice-presidency in order to make a run for president as an independent. And now we see Mellie Grant setting up the dominoes for her eventual run for president — and of all of them, she might just be the one to make it to the White House. And she's also not your average female candidate. Which is awesome to see.

Female candidates have to walk a fine line in politics. Be pretty but not too pretty. Be smart but not too smart. Be strong but not domineering. Basically don't make anyone feel threatened. Make them think you can do the job, but do it by being as thoroughly non-exceptional as possible, lest it make people uncomfortable. And while Mellie Grant will undoubtedly have to walk that line — and do it well, just as she's managed to walk the tightrope that is being First Lady. But as we saw tonight when Mellie shut down Elizabeth North and made it clear that she is not interested in her campaign manager questioning her decisions, Mellie is not non-threatening in any sense. And seeing that on network television is pretty awesome.