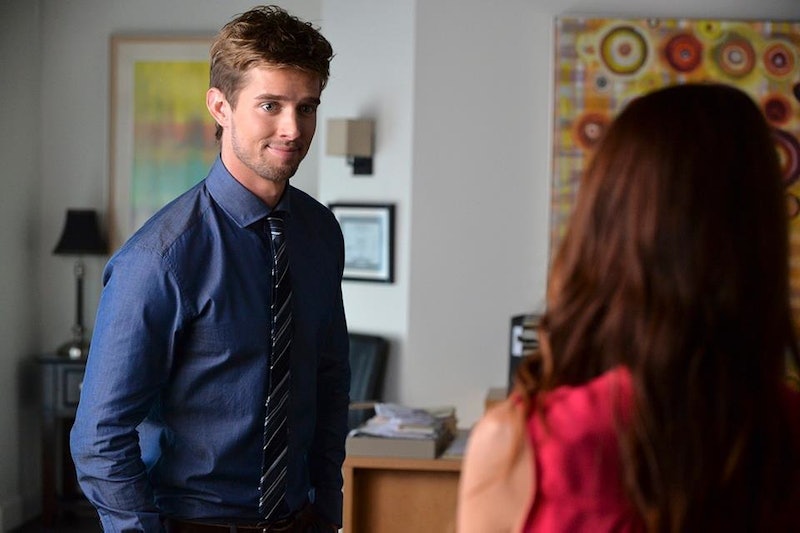 Will the real Jason DiLaurentis please stand up? During what proved to be a rather epic Season 5 finale, Pretty Little Liars revealed Big A's identity in the form of Charles DiLaurentis, who appears to be Jason's twin brother. And while it can't be denied that those little boys in that home video look strikingly similar, it may not be as cut and dry as all that. (But then again, when is it ever on this show?) You see, that's the thing about twins. It's almost impossible to tell them apart. So much so that they could go around impersonating one another, which may be exactly the kind of twist PLL Season 6 has in store. Call me crazy, but what if Charles killed Jason and has been impersonating him ever since? When you think about it, it's not really that difficult of a pill to swallow.

Now that it's been confirmed that we've definitely seen Charles before, our search has been somewhat narrowed down (albeit, not by much), giving us at least one fundamental fact to work with. And let's be honest: It would kinda be the perfect crime — killing someone who looks exactly like you. And since practically no one (that we know of) knows that Charles exists, it would be relatively easy to start impersonating him without anyone being the wiser. And, I mean, that's pretty much how it played out in the books, except then the bait and switch was between Alison and Courtney, not Jason and Charles.

Normally, I would be thrilled to learn that there's more than one Jason in this world (because, duh, look at him), but just think of what this would mean. If Charles is A and A has been pretending to be the real Jason, then that means that Hanna's mom has SLEPT with A. That means A is actually Spencer's BROTHER. (Anyone else's head ready to explode?) And that's just the beginning. The next question we should immediately be asking is why. Why would Charles do all of this? What does he stand to gain from killing Jason and assuming his identity? Perhaps everything he never had while growing up.

As the home video revealed, Jessica DiLaurentis was with two young boys (presumably Jason and Charles) along with their baby sister (presumably Alison) at the Campbell Farm. Was this simply an innocent family outing or was one of the boys actually a permanent resident there? It's unclear why exactly Jessica would feel the need to keep one of her sons a secret and not the other, but given everything we've come to know about A, clearly this is a person who is in need of some serious mental help.

Maybe Jessica sensed this and initially hid Charles away with another family (aka The Campbells), with the hope that being away from Rosewood would improve matters. That is, until his increasingly disturbing behavior left her no choice but to place him in Radley, where he became consumed with resentment and jealousy over his twin brother's life — the life he thought he deserved, but never had. So when he did finally escape the confines of Radley's padded walls, he decided to exact his revenge and make everyone who had a hand in his captivity pay for what they did. And what better way to do that than by hiding in plain sight? Plus, as far as height goes…

...it's pretty spot on. Not to mention, it would also help explain Jason's tendency of disappearing for weeks on end without any sort of rhyme or reason. (Hey, evil lairs aren't just going to take care of themselves.) Big A could've been starring us from that handsome face of his this entire time. We just never realized it.

More like this
Everything To Know About The 'Pretty Little Liars' Reboot On HBO Max
By Mary Kate McGrath and Jack Irvin
Everything We Know About When To Expect Money Heist: Korea Part 2
By Kadin Burnett
Wait, What’s Going On With Ben In That Umbrella Academy Season 3 Post-Credits Scene?
By Gretchen Smail
Viktor Hargreeves’ Coming Out Scenes Are The Sweetest Part Of Umbrella Academy Season 3
By Gretchen Smail
Get Even More From Bustle — Sign Up For The Newsletter