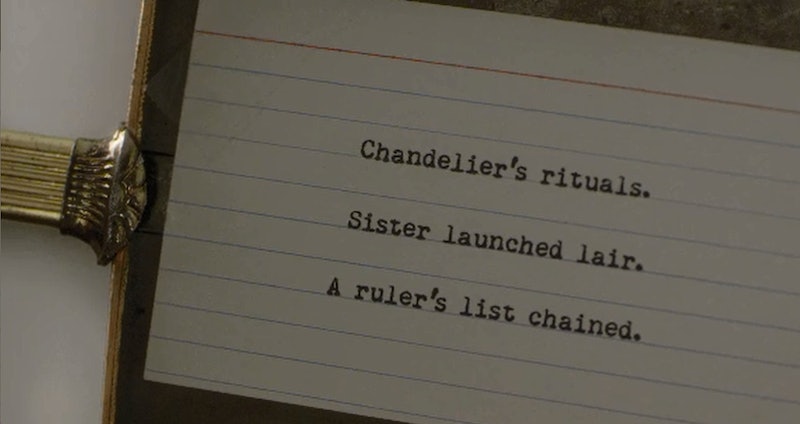 In true Pretty Little Liars fashion, the show's answers always come with more questions. Luckily, we got one huge answer in Tuesday's finale "Welcome To The Dollhouse" — so huge that most fans are still picking their jaws up off the floor. We now know that Charles, likely Jason's twin, is Big A, as revealed by Spencer's viewing of A's home movies. While fans can rest easy knowing that Charles is the person stalking the girls and that he's likely a DiLaurentis, that's the extent we know about this masked figure. That's not to say that we don't have any other clues about the real identity of Charles — according to I. Marlene King, it's very possible that we've seen Charles without his mask on (wink, wink) which means that it's pretty likely we already know this character in some way. So who could it be? I have my theory: Harold Crane is Charles.

If that name doesn't sound familiar to you, that's OK — he's only appeared in two episodes of the series. Harold is the man who ran the Lost Woods Resort and appeared in the finale of Season 2 — the episode in which Mona was revealed to be A — as well as a second episode in Season 3, after Mona returned to Rosewood. Here's Harold:

What we know about Lost Woods Resort manager Harold makes him mighty suspicious. First of all, he has that whole "Norman Bates" thing going on, which means one thing — he's a total psycho. Secondly, he was the one who had access to A's lair when Mona was inside that hoodie. We know that "the game" was stolen from Mona when she went to Radley, but what if Charles (aka Harold) was inspired by all of the things that he saw inside of Mona's lair? It would explain why Charles would have all of this information on the girls, despite being virtual strangers. We also know that Harold was so obsessed with Mona that he followed her to Rosewood High and stole things from her lair, like Alison's diary. Was he stealing those things to be close to Mona, or to learn more about the other girls?

Clearly Harold is a minor character — heck, he's not even a minor character as so much as he's barely a character. But I'm not so convinced that A is a character we know and love, simply because, well, we're running out of options. I know that we should never rule out any A suspects, but I think we can safely that Charles is PROBABLY not Toby, Ezra, or Caleb (simply by virtue of them being together and not in the dollhouse) and Jason, assuming that Jason isn't imitating his own twin. (Cool twist though!) Sure, Wren's a possibility (but would he really knowingly date his own half-sisters?!) as is Lucas, Andrew, and Noel, but still... not everyone can be A.

Making Harold A would be a smart twist — he's far enough in the background not to be suspected, but he's also played a role in the girl's lives. Personally, I'm less interested in Charles' real identity as I am the reason behind his A-ness. Clearly, there's a story there — I can't wait to see it unfold in Season 6.