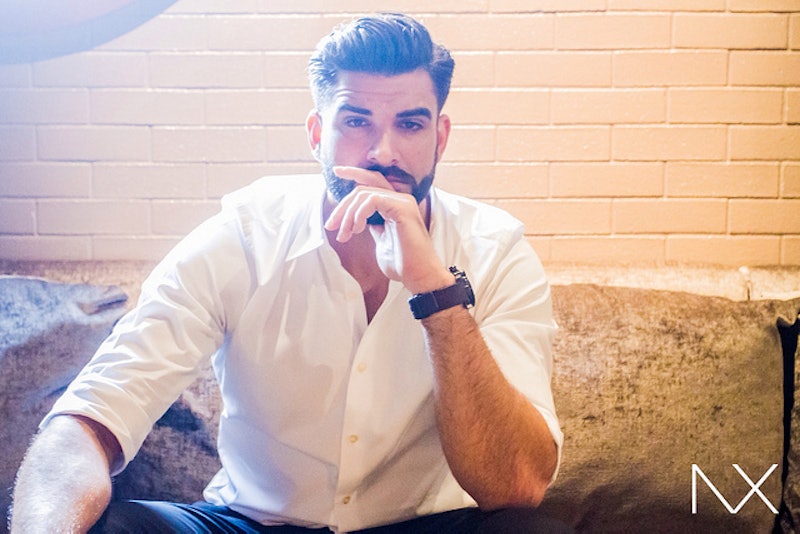 Oh Beardy McBeard! How you enchant and ravish us so your wiry whiskers and your musky whiff of masculinity! Clearly we can't get enough of dating men with beards. I've already told you what your beard preference says about you as a beard lover. Now I'm going to go into a more in-depth analysis of beards, discussing what you can expect from different beards and how you should regard such men. "But aren't all beards pretty similar?" you wonder quizzically. No girl, they are not. Because different beards give off different messages. Kind of like how a power suit you might wear to your wrongly accused defendant's murder trial says, "I'm going to mop the floor with the opposition", while a minidress might say "I'm feelin' myself and I'm gonna be feelin' that cute guy later." You see? Same person, different vibe. In other words, styling goes a long way.

By creeping on Beardbrand's Instagram and harnessing my psychic powers (I once had a dream my friend broke her arm and then she DID) and beard whispering abilities, I've managed to come up with this handy-dandy guide to beard dateability. In other words, consider this the most unscientific thing you've ever read. And yes I know there are exceptions to every rule so if your very awesome man sports one of these less-alluring styles, don't start tweeting at me. If you're ever in a pinch and not sure whether or not you should lock lips with that neared stranger fear not. The Guide to Beard Styles is here.

First of all this guy Robin Van De Wal is fine as hell. But keep your panties on ladies, this stud lives in the Netherlands. Unless of course, you happen to live there. In which case go for it. Think about all the hardships that a ginger has been through. Mockery. Derision. All for having red hair. When it comes to hair colors red hair is often the least popular choice for men, so the fact that ginger dudes are willing or rock that fiery bush on their face is a sure sign of their confidence and self-assured nature. He will not bail at the first sign of difficulty because he's BEEN THERE.

Um....I don't even know what to say. But I'll start with this: "Why?!" WTF is this?! Flowers fully bleed all the masculinity from a beard. Flower beards are for hipsters and other such dudes who try too hard. It DEFEATS THE WHOLE PURPOSE OF A BEARD! Unlike a cute whimsical flower crown, flower beards are reminiscent of a bird’s nest. If said bird was interested in interior decorating. What if you're kissing him and a bee tries to pollinate him? I don't know about you, but I don't want to look at a guy and think, "Hmmm his face looks an awful lot like my garden." Alright I’m getting a little heated here I’m going to try and calm down. Do not hook up with this guy unless you are OK with a dry hooha.

3. Patchy Beard: The One Date Guy

Patchy is likely to be so insecure about his lack of beard growth he will try really hard to man up in other ways. Like he'll have a psycho obsession with sports, beer, and his bros, (trust me on this one, I've been there). And do you really want that? A man secure in his masculinity is a lot sexier than one who is trying to be. If you can't grow a beard just don't bother. Or stick to stubble. A patchy patch beard is like a half-waxed vagina (yes I know the correct term is mons pubis but that doesn't sound as fun). Go for the gold or don't bother.

4. The Newly-Grown Beard: The Fling

The first thing you must do upon talking to a bearded dude is ask him how long he's had the beard. If it's a recent beard, beware. He is likely a trendy type likely to hop on any passing fad in the hopes that it makes him look hip. Like when country star Pat Boone inexplicably decided to go all metal. Inauthentico my friends. Don't get me wrong, I love fashion and will alter my wardrobe if Stella McCartney invents something cute I have to wear. But it's still reflects the essence of who I am. For example, crop tops. As I love anything that makes my boobs look better it only made sense that I buy at least 4. Printed silk harem pants? Not so much. Trendy will not only leave you when the next hot thing comes along, he'll be looking at himself in the mirror the whole time you're together.

5. The Goatee: The Guy You Date Because You're Bored

Let's get one thing straight. Goatees are not really beards. Goatees are for guys who are too scared to grow a real man's beard so they settle for cheap version. It's like buying that Balenciaga knockoff from Chinatown instead of going to Barney's and paying full price. It's not REAL!! And we can all tell from that faux leather smell. You know who has a goatee? The infamous modelizer Leonardo DiCaprio. A 40-something man who has never dated anyone past the age of 22 or wasn't a model. This guy might be fun for a nice dinner and maybe a roll in the hay (if that), but he's not worth investing any time in.

5. Stubble: The Guy You Date for a Good Time

Stubble is sexy. And it makes sense when you're transitioning from clean-shaven to a beard. But perma-stubble is another thing altogether. It signals that the man in question is trying to cultivate a rebellious, devil may care attitude, but underneath it all he's trying. He's trying REALLY hard. The appearance of stubble suggests that he hasn't shaved because he's not working for the man. He's been up all night drinking and banging hot chicks. He's doesn't have to get up til noon when you hop on your Harley to meet your agent. He's a regular James Dean. Said guy will likely shave soon or just grow a beard. However a guy with perma-stubble is living a double-life. He is actively working at maintaining that stubby stub, while trying to pretend he could care less about his appearance.

A full beard is the epitome of masculinity. A beard says says I have a butt load of testosterone, I can chop lots of wood, drink whiskey, and make sweet, sweet, love to you all night. Like a champ. Think George Clooney. Or Jon Hamm. Yum-a-doodle-doo. The full bearded gentleman will treat you like a lady. He'll always open the door, walk curbside, pay for dinner, and pull out your chair. He's worldly and accomplished. Like Vasco de Gama. Or an Eames chair.

More like this
Glossier’s New Olivia Rodrigo Campaign Is Giving ‘90s Groovy Chick
By Tomi Otekunrin
Kiehl’s Just Launched Eco-Friendly Cleansing Bars
By Jessica Morgan
How To Style Your Hair For A Festival, According To Maya Jama’s Hairstylist
By Tomi Otekunrin
Bustle Newsletter: June 22, 2022
By Stephanie Talmadge
Get Even More From Bustle — Sign Up For The Newsletter