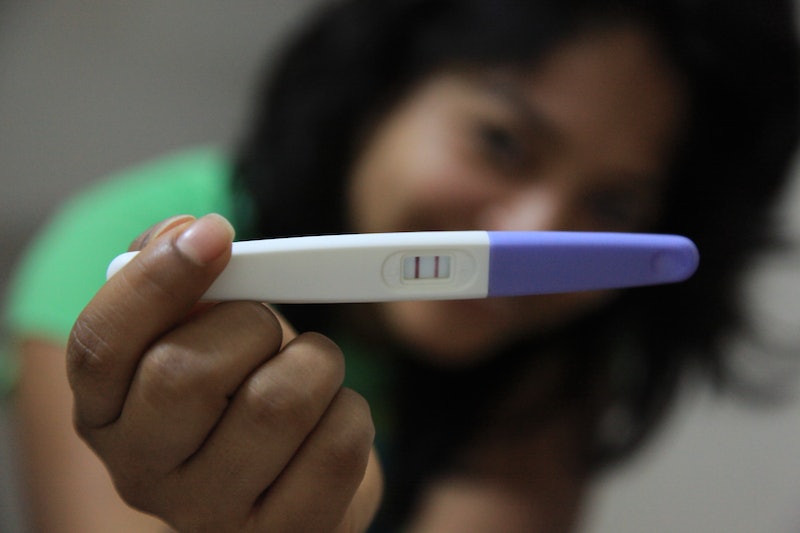 An unprecedented reproductive rights case in Indiana is as close as it gets to playing out Margaret Atwood's The Handmaid's Tale in America. Purvi Patel, a 33-year-old Indian-American woman, faces up to 70 years in prison on the contradictory charges of feticide and felony neglect for what advocates say was a stillbirth. How Patel ended up in handcuffs and a prison cell could be a chilling new reality for pregnant women across the United States. Update: On Monday, Patel was sentenced to 20 years behind bars.

Here's what you need to know about the case before Patel's sentence hearing in South Bend, Indiana, on Monday...

The (New) History Of Feticide Laws

At least 38 U.S. states have laws safeguarding pregnant people against feticide, or the intentional killing of a fetus (abortion is commonly exempted under these laws). Many of these laws, including the statute in Indiana, have been around for decades, but their purpose has begun to shift in recent years.

Patel is only the second pregnant woman to be charged for killing her fetus under Indiana's feticide law, and the first pregnant woman to be convicted. The first woman charged under the statute was Bei Bei Shuai, who's also a woman of color. Shuai was charged after she attempted to commit suicide while eight months pregnant; she survived, but her child, which was delivered by a C-section, did not. Although Shaui spent time in prison, the charge of feticide was later dropped, and she was freed on a plea deal.

Patel, however, faces a much darker fate.

On July 13, 2013, Patel says she miscarried while in the Granger, Indiana, home she shares with her parents. At least 23 weeks pregnant, she delivered a stillbirth, and the pregnancy loss caused both physical and psychological trauma. Frightened, confused, and bleeding heavily, Patel placed the dead fetus in a bag and put the body into a Dumpster near her family's restaurant. Then, Patel went to St. Joseph Hospital in nearby Mishawaka, Indiana, for treatment.

According to an affidavit, Patel was transferred from the emergency room to the maternity floor after hospital staff determined she had just given birth. Patel first denied that she was ever pregnant, then later admitted that she had delivered a stillbirth at her home. She told doctors that she did not see the baby breathing or moving, and that it had been dead at birth. (It's worthy to note here that one of the doctors who examined Patel and the corpse of the fetus at the hospital was Dr. Kelly McGuire, a local doctor who's a well-documented member of the American Association of Pro-Life Obstetricians and Gynecologists.)

However, the affidavit claims a forensic pathologist, Dr. Joseph Prahlow, determined the baby was alive at birth. Police officers who searched her cell phone also alleged that Patel took abortion-inducing drugs, which she ordered online, because of text messages she sent to a friend. The messages stated she ordered the drugs from Hong Kong, and that she was more than 60 days pregnant.

There was very little conclusive evidence supporting these claims, which were greatly disputed during her trial. Doctors who testified for the defense said Patel did not have remnants of abortion-inducing drugs in her blood work when she arrived at the hospital following the stillbirth. The toxicologist also failed to find evidence of those drugs in the blood of the fetus. And as Patel's lawyers pointed out, just because she texted her friend about the abortion-inducing drugs doesn't mean she actually took them.

Members of the Indiana Religious Coalition for Reproductive Choice who attended Patel's trial also reported the prosecution used a discredited "lung float test" to prove that the baby was birthed alive and took at least one breath. The test has largely been debunked by contemporary scientists.

Patel was charged with feticide for allegedly deliberately terminating her pregnancy and neglect of a child for placing the fetus into a Dumpster. Problem is, these charges are contradictory. Feticide only applies to a fetus, and so it must be killed in utero. Meanwhile, neglect of a child can only apply to an already-living child. So, how could Patel be charged with both killing her fetus and neglecting a birthed, living infant?

According to many pregnant advocates, reproductive rights activists and legal analysts, she couldn't be. As Sally Kohn noted in the Daily Beast last August, Indiana prosecutors appeared to have gone after both charges to imprison Patel one way or another:

However, Indiana prosecutor Ken Cotter contended to Slate last month that the feticide law applies even when the fetus survives. It's unprecedented, but it's how prosecutors are now interpreting the law. Essentially, prosecutors care about one thing: Did a woman intentionally try to terminate her pregnancy? And if so, that's now grounds for arrest and imprisonment.

This standard can set a dangerous precedent for pregnant women, as people who endure miscarriages or stillbirths may also face scrutiny and in Patel's case, decades in prison. Many advocates now worry that these laws will be leveraged against people seeking medical treatment following a miscarriage, stillbirth or a self-abortion, the latter of which is increasingly troubling as access to safe abortion becomes rarer and rarer across large swaths of America.

"Indiana seems to be setting a precedent of prosecuting woman who seek medical treatment after a pregnancy ends," Reverend Marie Siroky said in January. "The feticide charge is not supported by evidence but by emotion. Charges such as these do more harm as they turn medical personnel into police informants."