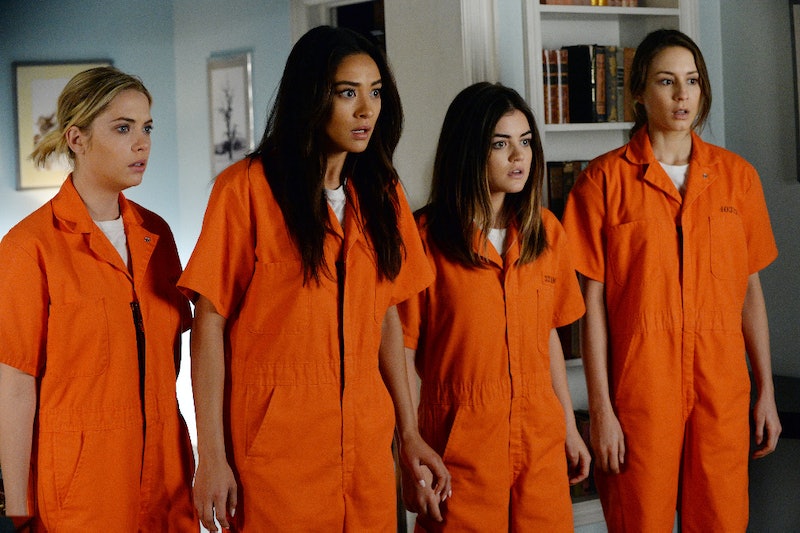 When the Pretty Little Liars writers told us that we would be getting a major clue about A's identity, they weren't kidding. The Season 5 finale "Welcome To The Dollhouse" revealed that a mysterious man named Charles is Big A, and, from the looks of his home movies, Charles is likely Jason's twin, too. It's the exact kind of jaw-dropping moment we've been waiting for since this new A stole the game from Mona back in Season 3, but it wouldn't be Pretty Little Liars if the reveal didn't come with plenty of questions. That's why it was imperative I get in touch with one of the few people who actually knows all of these answers, Pretty Little Liars writer Maya Goldsmith.

Though Goldsmith was careful not to spoil too much of what the writers promised People Magazine will be a season of ultimate answers, she did give us plenty of ammunition for the furious theorizing we'll all be doing leading up to Season 6. We probably aren't going to be able to solve the whole thing with Goldsmith's helpful hints, but you can bet all of those little clues we've have picked up on will definitely come into play when the Liars return in June.

Every. Tiny. Little. Clue Is Important

"It's so fun to have fans who are that engaged with the characters that they spend the time really combing through. We're really conscious to make sure that we pay off all of the clues that we set into motion, because we know everyone's paying attention... [Anytime] we put clues in the [show, it will pay off.] Wait and watch."

Don't Worry So Much About Varjack

"As the girls say, [Varjack] is a nom de plume, it's another name that A is using. At this point, the girls now have the name Charles, so in this season going forward, the girls are following this trail of 'Who is Charles?' That's really where the focus is this season."

Don't Form An Opinion Of Charles Just Yet

"It's so funny about characters, because Ali, to me, is the greatest example... some people love her, some people hate her, some people used to hate her and now love her... I think the great thing about this series is the development of characters, even the more mysterious ones... as you get to know different facets of them, you might grow to love a character you didn't like... any character is open to be hated and loved at equal measure."

"I think Tanner is well-intentioned. I think she's dealing with a police force that clearly has made many mistakes. She may be a thorn in the girls side, but I think it's more unintentional than anything else, [but] whether she'll stand in the way or actually help the girls remains to be seen."

They Do Use The Books, But You Probably Won't Find Any Huge Spoilers There

"We've all read the books, and we definitely use things from the book, and will moving forward, but we really pick and choose depending on where we're at in our stories. For instance this season the storyline with Hanna and Aria's stepfather-to-be, he has [this encounter] in which he's inappropriate with her — that's a storyline that was already done in the book, though we made it with Hanna and not Aria."

The Dollhouse Will Last A Few Weeks In Season 6

"We will spend some more time in the dollhouse [next season]... The time period is very compressed, over a period of weeks, so the urgency is very heightened."

Don't Write Off That "Andrew = Charles" Theory So Quickly

There you have it, folks. Now get back on Tumblr and theorize like the wind!