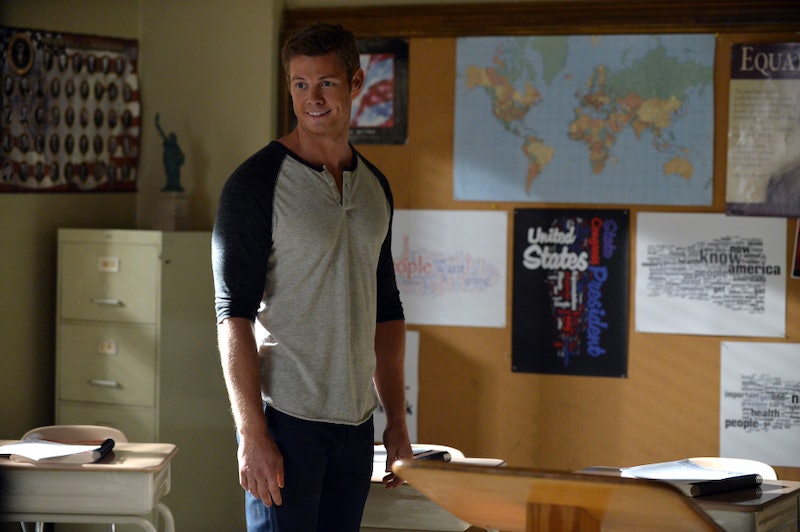 If you thought the Hastings-DiLaurentis connections were confusing before, I hope you haven't thought too hard about Charles DiLaurentis being Big A on Pretty Little Liars. Thanks to Spencer coming across Charles' home movie of Mrs. DiLaurentis hanging out at an apple farm with two young boys and their infant sister, many fans quickly concluded that Charles is most likely Jason's twin brother. While some may believe that Charles and the increasingly sketchy Andrew Campbell are one and the same, I have a different idea. What if, in addition to being Jason's twin, Charles is Andrew's brother?

Even if PLL is messing with us (imagine that?) and the two boys in the video aren't twins, they were at the very least extremely close in age, which Andrew and Jason are not. Plus, Charles trying to recreate the prom that Melissa Hastings went to suggests that he is her age, again making Andrew much younger than Charles. But even if Andrew are Charles are different people, they could still have a very close connection that makes the PLL family tree even more complicated.

See, Charles being Jason's twin would make him Spencer's half-brother, and I don't think the family ties end there. Though you may have missed it in all the Big A Reveal madness, the place where Caleb lead the Hastings and police, which ended up being A's lair, was Campbell Farm, as Mrs. Hastings remarked that she used to bring the kids apple picking there. Thanks to a unique symbol, we know that Campbell Farm was also the setting of the home video of Mrs. DiLaurentis, Charles, and Jason. Again, Andrew's last name is Campbell.

Considering the scale of Season 5 finale, I don't think PLL is going to explain this video as the DiLaurentis family visiting Campbell Farm, and Andrew accidentally stumbling into the video frame — especially when you remember their age difference. No, clearly Campbell Farm is important to Charles, and that just might be because it's where he grew up.

We had never heard of Charles until fans first figured out Mona's anagrams, which suggests that Ali never knew about him, and clearly none of the Liars did either. So where has Charles been this whole time? All signs point to him being sent away from the DiLaurentis home, sometime after the video was taken. Thanks to the mysterious Bethany Young, Radley Sanitarium is the obvious choice for Charles' place of banishment, but what if Mrs. DiLaurentis didn't send her son there? We know she served on the Board of Directors, maybe she knew a dark side of Radley and didn't want to risk Charles being mistreated there.

So where did she send Charles, after whatever happened that meant he could no longer stay with his own family? Maybe to live with the kind family whose farm held precious memories for Mrs. DiLaurentis, from when her entire family was still together. It wasn't too far away, letting her check on Charles when she needed to, and giving him a life with people who would care for him — a life where he would still have a brother, though not a twin.

As we continue to learn more about both Charles and Andrew in Season 6, I think their connection will be revealed as familial. Just like Charles is a brother of Jason, Alison, and Spencer, he could also be the adopted brother of Andrew. With everything Charles has done to the Liars throughout PLL, it's clear he's had a few helpers. Who better to recruit than the only sibling who actually knows him?

More like this
Every Horror Movie Reference In The 'PLL: Original Sin' Premiere
By Alyssa Lapid
The 'PLL: Original Sin' Creators Say A’s Identity Will Be “Very Clear” By The Season Finale
By Alyssa Lapid
Molly-Mae Hague Has Secured Herself A Pretty Little Fortune
By El Hunt
What's New On Netflix: A Third '365 Days' Movie & Lili Reinhart’s New Film
By Arya Roshanian
Get Even More From Bustle — Sign Up For The Newsletter