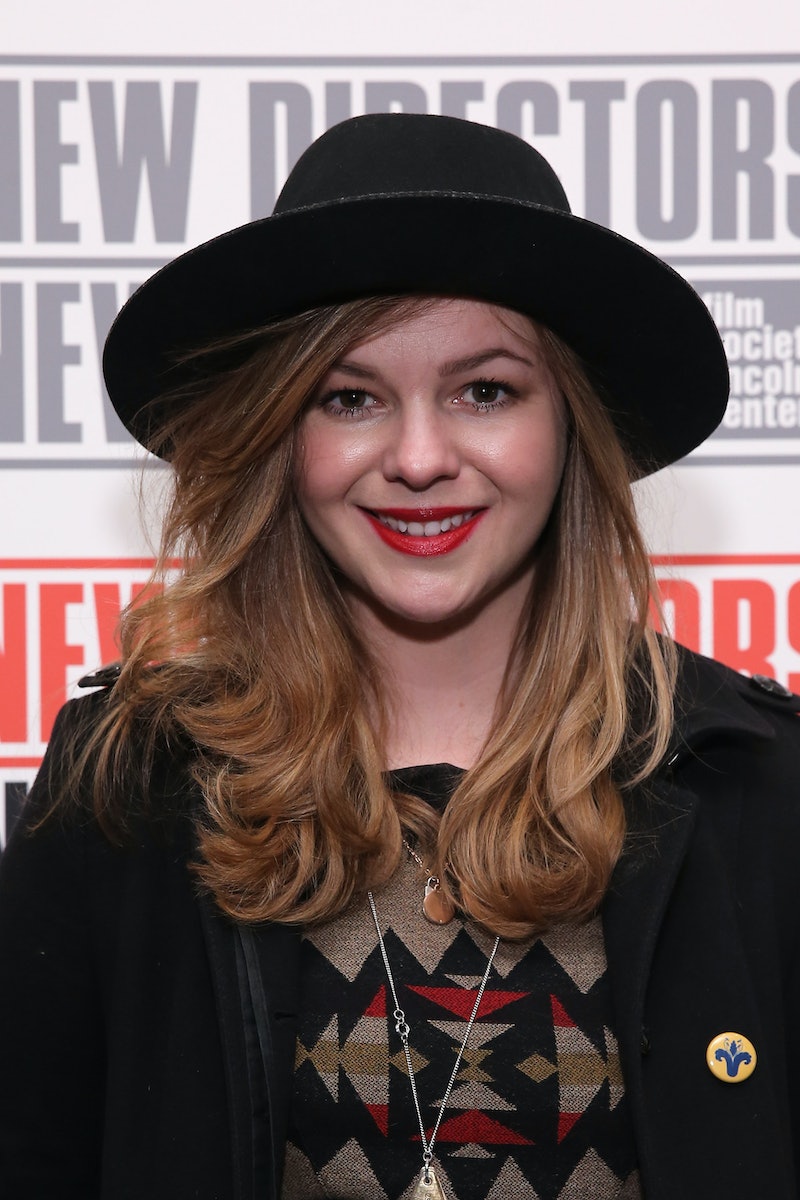 Amber Tamblyn has a plan. In a couple of decades, around when she turns 60, she's going to make a move — a big one.

"I’m gonna sort of career jump and move to Scotland, in a great fog where no one can find me," she says, with a laugh. "It sounds like heaven."

Good luck with that. Right now, Tamblyn couldn't be more visible. The actress and writer just wrapped up the final season of Two and a Half Men, on which she starred; a new movie, Growing Up and Other Lies, just became available on iTunes and on demand; the first film she's ever directed, Paint it Black, is in the stages of being edited; and her third collection of poetry, Dark Sparkler , is being published on April 7. If Tamblyn wants not to be noticed, it's not exactly working.

Not that anyone's complaining. Although Tamblyn is best known for starring roles in The Sisterhood of the Traveling Pants series and the acclaimed but short-lived series Joan of Arcadia, it's been awhile since she truly commanded the spotlight. The fact that it's happening now for both her acting and writing — vocations the star loves so equally that she says choosing between them is like having to "pick one child out of the fire" — is icing on the cake, a showcase for Tamblyn's remarkable collection of talents.

And it almost didn't happen. Although Tamblyn has published several poetry collections before, Dark Sparkler, about the tragic lives of dead actresses, took nearly six years to write, a painful process she documents in the book's epilogue. The reason wasn't your typical case of writer's block, though, but something much deeper; writing about the short lives of Brittany Murphy and Marilyn Monroe took a deep toll on Tamblyn, who, at 31, is at the same age that many of the women featured in the book died. To get closer to their stories, she drank, did drugs, experimented with "a lot of the stuff that those same women did," but found that she couldn't write in that frame of mind. So she took a year off, cleared her head, and, eventually, finished the book.

"It’s not easy to write about your dead peers, people that are exactly who you are, and have been through exactly what you’ve been through," Tamblyn says. "I was giving myself a lot of permissions that I normally wouldn’t... and telling myself that’s how I am going to get closer to the story, that’s how I’m going to become one with them. But I can’t write like that. It just made it even darker."

It's the eerie nature of the poems, though, that makes them so compelling. From Murphy's vivid, haunting ode ("her body dies like a spider's") to a study of Jayne Mansfield's neck to an eerie blank page bearing Lindsay Lohan's name, each poem is striking and memorable. Even the ones about actresses most readers might not know, like Alison Andres or Taruni Sachdev, are impressively powerful. Some of the least-known stories required years of research, with Tamblyn searching archives and conducting interviews to "fill in the blanks."

"What’s interesting is that I wrote this poem for Brittany Murphy, and I didn’t intend for it to be the spark of a topical book," she says. "But I got a lot of people, a lot of friends and some people in the literary world, who were really drawn to it. Two of my school friends, who are poets, they're the ones who both said, 'you know, you realize the next book you have to write.' So after that, I just sort of went, oh, shit, and it just told me that that made sense."

Writing, particularly poetry, has long been part of Tamblyn's life, even though, she admits, she has "a hard time sometimes saying out loud that I’m a poet." Her first poem, "Kill Me So Much," was written at age 12 and is included in her first collection, Free Stallion. A political ode ("I took myself really seriously," she says wryly), it was written as an homage to Jack Hirschman, a famed poet, activist, and family friend of the Tamblyns. He had it published in a small magazine.

"I remember the power," recalls Tamblyn of seeing her first work published in print. "Just going like, I can’t be that just for me, I can be that for other people. People can feel what I feel, in a way that acting had never really given me."

An avid reader, Tamblyn knows what power a good book can hold. She recently finished The Awakening, her first time taking on Kate Chopin's feminist classic, as well as Roxane Gay's An Untamed State, a "really excellent book" that "everybody should read." She's a big fan of Gay, especially the Bad Feminist author's views on feminism.

"Wee hold this word up to some crazy standards," says Tamblyn. "It's part of why it’s such a difficult word to swallow."

The star, however, has no problem with calling herself a feminist, and is frustrated by women who don't do the same.

"Not embracing it is bullshit," she says matter-of-factly. "When young girls tell me that, or I read that someone says they’re not a feminist, it’s like, well you actually can’t not be one, because you have a vagina. So I hate to break it to you, but you have to be, no matter what."

Still, "you can define it however you want to," Tamblyn continues. "Feminism is like God. It’s totally subjective, it’s totally personal, and it’s none of anyone else’s business."

"No matter what," though, she says, "it should be embraced."

Currently, Tamblyn is doing her part by directing Paint It Black, an adaptation of Janet Fitch's 2006 novel about the twisted relationship between a young model (Arrested Development's Alia Shawkat) and her dead boyfriend's grieving mother (Janet McTeer) that she also co-wrote. It's a rare film centered around the connections between women, especially a bond as complex and fraught as Josie and Meredith's, and it will undoubtedly act as a showcase for the talents of its often-underrated stars.

"It was an incredible experience," says Tamblyn. "Alia Shawkat starred in it, she’s f---ing great, really, really great. I don’t think she’s ever been in a movie like this. No one has ever seen her like this, a really good dramatic role, and she killed in it. I’m very excited."

Tamblyn's friendship with Shawkat goes back to the Arrested Development days; the director's husband, David Cross, played Tobias on the cult show.

"People don’t realize it’s so effortless for him, how funny he is," she says. "People take years to hone that, but he's just naturally like that. It always brings me great joy when we get to see that."

As for Tamblyn's own on-screen efforts, there's the release of Growing Up and a film called Cleveland in the works, but it's the just-announced third Sisterhood of the Traveling Pants movie that has fans most excited. In February, star America Ferrera revealed that a script was in the works, and Tamblyn confirms that a final reunion is underway.

"We're very excited about doing something that has literally never been done before, which is creating a film that’s part of a YA book series that’s incredibly relevant emotionally, that goes deeper," she says of the new movie's jump to adulthood. "We’re all really excited about writing about what real lives are like for women who are turning 30 or have just turned 30, and that idea of like, Saturn’s return."

Although Tamblyn can't reveal any details, she does say that the film will follow the fifth book in Ann Brasheres' series, Sisterhood Everlasting. Or, to put it bluntly — spoiler alert —"in the books, Tibby dies."

It may be a depressing end to the franchise, but it's safe to assume that Sisterhood fans will enjoy every moment of the film. It's clear that Tamblyn's thrilled to be reuniting with her co-stars once more — the four leads are close friends in real life, and Tamblyn jokes that she's "basically Blake Lively. I’ve just got like, the most amazing legs, and I’m pretty tan, and I’ve got these giant eyelashes and this gorgeous mole on my face."

However the movie goes, though, one thing's for sure: the actress' plans for anonymity? Not going to happen for a long, long time — and for fans of the star, that's totally OK.

More like this
Annie Lord’s Memoir Will Make You Believe In Love Again
By Shahed Ezaydi
16 Novels That Paint A Realistic Portrait Of Abortion
By K.W. Colyard
Lauren Rae Is Bringing Back The Sex And The City Vibes In Her New Memoir
By Shahed Ezaydi
Sparks Fly Fast & Furious In 'Honey & Spice'
By Bolu Babalola
Get Even More From Bustle — Sign Up For The Newsletter