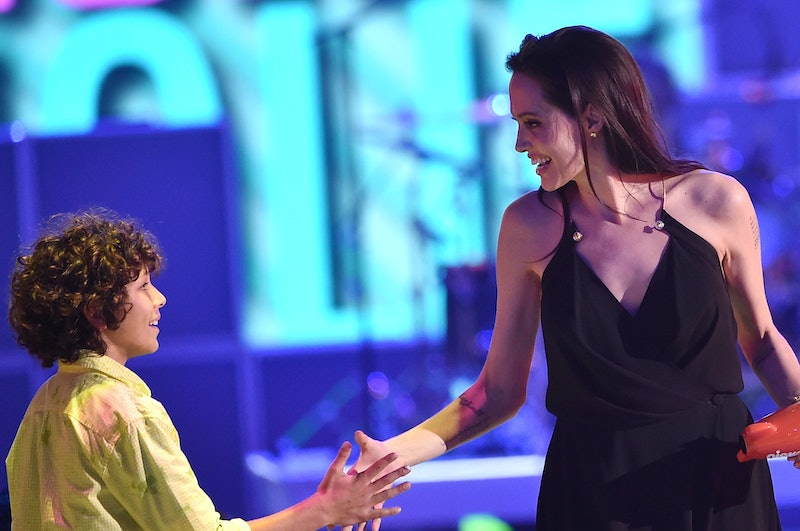 Angelina Jolie was by far the biggest (adult) A-lister at the 2015 Kids' Choice Awards, and her acceptance speech for Favorite Movie Villain had the wisdom and gravitas to prove it. Angelina Jolie's Kids Choice speech wasn't without its good humor though, getting a sweet start as Jolie made her way to accept the night's last blimp after exchanging adorable hugs with her two excited kids in attendance, Shiloh and Zahara, and traveling through an arching tunnel of slime to deliver a perfectly inspiring message. Anyone who saw Malificent knows that she was a villain who was a little misunderstood, a sentiment that Jolie explained was part of growing up for her: "I want to say that when I was little, like Maleficent, I was told that I was different, and I felt out of place, and too loud, too full of fire; never good at sitting still, never good at fitting in. And then one day, I realized something — something that I hope you all will realize: Different is good."

With that rallying cry, huge cheers erupted from the audience of young people surrounding the KCA stage. Most of the kids in attendance and watching at home might not have know that this was Jolie's first appearance after announcing in an op-ed in The New York Times that she'd had her ovaries and fallopian tubes removed, but she still had an important message meant specifically for them — for the kids that feel out of place, too full of fire, and like they don't fit in. Jolie went on to tell those kids, "Don't fit in, don't sit still, don't ever try to be less than what you are, and when someone tells you that you are different, smile and hold your head up high, and be proud."

And like the true cool mom she is, Jolie had one more important tip before she wrapped things up: "As your villain, I would also say, cause a little trouble... it's good for you." You can bet her own kids took that to heart.

Women like Jolie know that never allowing ourselves to be less than we are is a message that people, very much including adults, have to remind themselves of constantly, and the earlier we start, the better. Most of the night's award winners made it to that stage because they stopped listening to anyone who told them they were "too loud, too full of fire," and it was the winner most advanced in her years who got up there and said it: "Different is good!"

You're our villain and our hero, Angie.