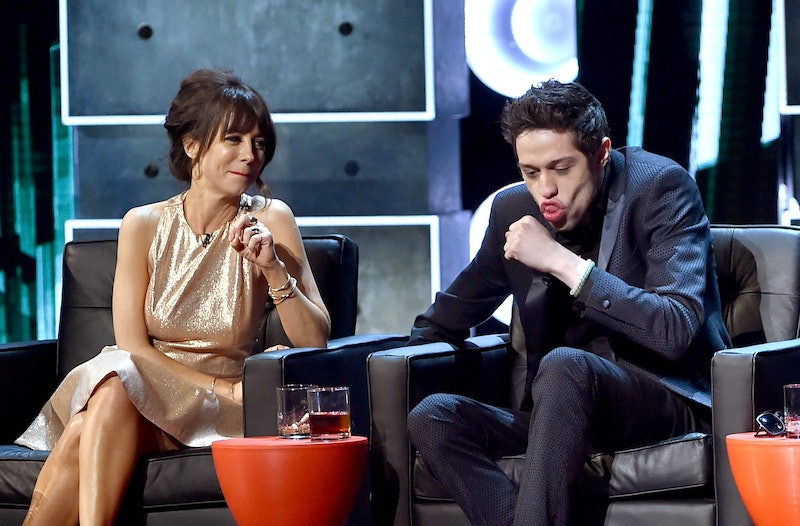 Sundays are typically uneventful sorts of days in the land of social media. I mean, it's a well acknowledged fact that most people like to spend their last day of freedom before heading back to work either brunching or sleeping or Netflixing, and the pinnacle of social media excitement is usually an above average looking Eggs Benedict on Instagram. But, Saturday Night Live's Pete Davidson, made sure this past Sunday was no ordinary day of rest, especially for fellow comedian Natasha Leggero. According to Just Jared, "The 21-year-old Saturday Night Live cast member took to Twitter to call out the 41-year-old funny woman for re-using a joke he made at Justin Bieber‘s recent Comedy Central Roast." And a bit of a Twitter tiff between Davidson and Leggero ensued.

The understandably upset comedian's tweet, that is now deleted, read,".@natashaleggero how the fuck u gonna do a joke on @midnight that I did on the Bieber roast that we were on together?" Yeah, it sounds like a fairly underhanded thing for Leggero to do, especially considering that Davidson points out that the two roasted the Biebs together.

I don't know about you, but I think that once you make fun of Bieber with someone, there's sort of an unspoken camaraderie that happens. If you're wondering what this controversial joke was, Just Jared relays that that Leggero's chide on Midnight went as follows, "Jeff Ross looks like someone put a butter sculpture of Mr. Clean in the microwave." Then, the site points out that Davidson's similar Bieber roast joke was, "You look like someone put Seth Rogen in the microwave.”

It should be noted that Leggero made sure to quickly apologize to Davidson. She wrote back to him, "...OMG so sorry I would never intentionally steal your joke- we had similar jokes and I forgot about yours." Then, in a series of tweets that have also disappeared into Twitter dust, she explained the situation and asserted that she didn't steal his joke at all. If what she said is in fact true, it appears that this was merely a case of "great minds think alike." Check out her now-deleted explanation below:

And, here's Davidson's original tweet as it appeared on Just Jared's site before being deleted:

More like this
Who Is Pete Davidson Dating? He "Courted" Emily Ratajkowski At A Knicks Game
By Jake Viswanath
Romeo Beckham Shared A Sweet Farewell Note From “Proud” Sister Harper
By Sam Ramsden
Leonardo DiCaprio Celebrates A Special Birth In Moving IG Post
By Sam Ramsden
Nicola Coughlan Just Shared A Major Update About 'Bridgerton' S3
By Sam Ramsden
Get Even More From Bustle — Sign Up For The Newsletter