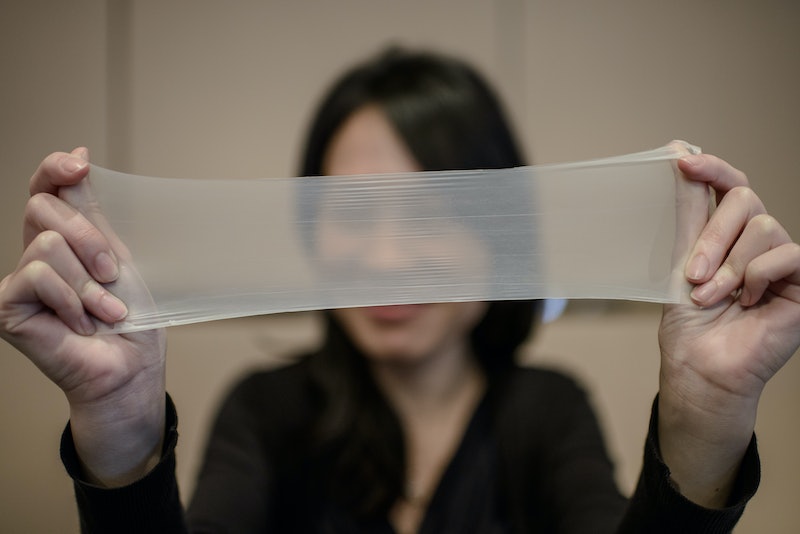 We at Bustle love giving you tips for how to tap into your sexual potential and troubleshoot when things aren’t going your way in the bedroom. But what about finding solutions to those stressful sexual health situations that inevitably crop up when you’re getting down? Emma Kaywin, a Brooklyn-based sexual health writer and activist, is here to calm your nerves and answer your questions. This week’s topic: how to know if you have a latex allergy.

Q: I’m worried something’s wrong with me. I'm not feeling so great — I think I have a rash in my vagina. I thought I might have an STD because it happens after I have sex, but I got tested and everything came back negative. I was at a party the other day and overheard one of my friends talking about how she just found out she is allergic to latex, and I thought wow … maybe that’s what’s happening to me. How can I find out if that’s what’s going on, and what can I do about it?

A: Latex — a product made from rubber trees — is found in many common items. One of the most common, of course, is the condom. If you’re using this method of birth control and you’re noticing that you aren’t feeling great in your netherparts, you might have a latex allergy.

Be assured that if this is happening to you, you’re not alone. Around one to three percent of people in the United States are allergic to latex, and that number goes up to around 10 percent for people who come into contact with it constantly (like healthcare workers who use latex gloves every day and the people who manufacture it). Here's what you need to know about the allergy — and how to determine whether you have it.

What Are The Symptoms Of A Latex Allergy?

There are different levels of latex allergy. The mildest version shows up in the vagina or on the penis as itching, red skin and hives, or a rash. More severe symptoms include difficulty breathing, coughing and wheezing, sneezing, a runny nose, itchy eyes, or a scratchy throat. These reactions are generally delayed — anywhere from six to 48 hours after exposure— which can make it hard to know immediately that it’s connected to the latex you just put on your most tender bits.

If you’re really allergic, you can go into anaphylactic shock. This generally doesn’t happen the first time you’re exposed, but if you’re very sensitive, it can happen immediately after you come into contact with the stuff. You’ll know you’re going into anaphylactic shock if you’re dizzy, struggling to breathe, wheezing, have hives, nauseous or throwing up, your blood pressure drops, or you pass out.

Going into shock like this is rare, but super dangerous! If this has ever happened to you, please tell a doctor immediately (as in, go to the ER). Seriously, you could die.

Why Are Some People Allergic?

Latex allergy is also associated with many foods that share some of the same allergy triggers. So if you’re allergic to latex, you’re likely to also be allergic to avocados, bananas, passion fruit, kiwi, and chestnuts, among other foods.

What Can I Do About It?

If this sounds like what’s going on with you, talk to your doctor about getting tested to make sure you’re actually allergic to latex. If you go into shock, remember that you should seek help immediately. And if you’re experiencing any symptoms, it’s a good idea to mention them to your doctor. Here are a couple changes that might also help your symptoms.

If you notice any of the more mild to medium symptoms, you can try out latex-free condoms and see how they make you feel. These tend to be a bit more expensive than latex ones, but at the end of the day, it’s worth it because sex is fun!

You can buy polyurethane condoms pretty much wherever latex ones are sold. Just like latex condoms, they have been shown to stop pregnancy and sexually transmitted infections. User research shows that humans with penises also really like them, probably because they are thinner, stronger, less constrictive, and better at transmitting heat than latex ones.

But a word of caution: polyurethane may be thinner and stronger, but it’s also less stretchy than latex. Because of this, some research has found that these condoms are slightly more likely to break or slip off.

These are great for protecting you against pregnancy, but unfortunately, the skin is more porous than latex or polyurethane, and the microscopic holes in the material are actually larger than some STIs, including HIV. So it’s a good idea to only use these if you know your partner’s STI status, and the only thing you’re trying to prevent is a baby. (And also, I guess, if you're not a vegetarian.)

Depending on your symptoms, your doctor may prescribe you medications. Delayed, more mild reactions can be treated by creams or oral steroids. If you are one of the people with a serious allergy and can go into anaphylactic shock, your doctor will prescribe you an epinephrine shot, commonly known as an epi pen.

What Else Could It Be Besides A Latex Allergy?

Many other things can cause symptoms similar to a latex allergy. Perfumed soaps can irritate your special parts. You could be allergic to other elements in your condoms other than the latex — such as spermicide. If you’re noticing allergy symptoms (and they aren’t dangerous), try switching up your condom type and taking a break from the smelly soaps … and if things don’t get better, talk to your doctor. You can also check out our list of other reasons why you might be feeling itchy down there.

Sex is supposed to be fun! If you’re not feeling spectacular because you’re experiencing some less-than-pleasant pussy symptoms, you owe it to yourself to figure out what’s going on and fix it. Because no one else is gonna fix it for you! Go to a doctor and get yourself checked out.

More like this
How Ovulation Affects Your Sense Of Smell, Libido, & More
By JR Thorpe and Lexi Inks
An Expert Weighs In On The Viral Raw Carrot Salad Trend
By Alexis Morillo
6 Asian Beauty Rituals That Will Soothe Your Skin, Scalp & Mind
By Jennifer Li
Experts Say You're Damaging Your Hair & Skin If You're Making Any Of These Unexpected Mistakes
By BDG Commerce
Get Even More From Bustle — Sign Up For The Newsletter
From hair trends to relationship advice, our daily newsletter has everything you need to sound like a person who’s on TikTok, even if you aren’t.