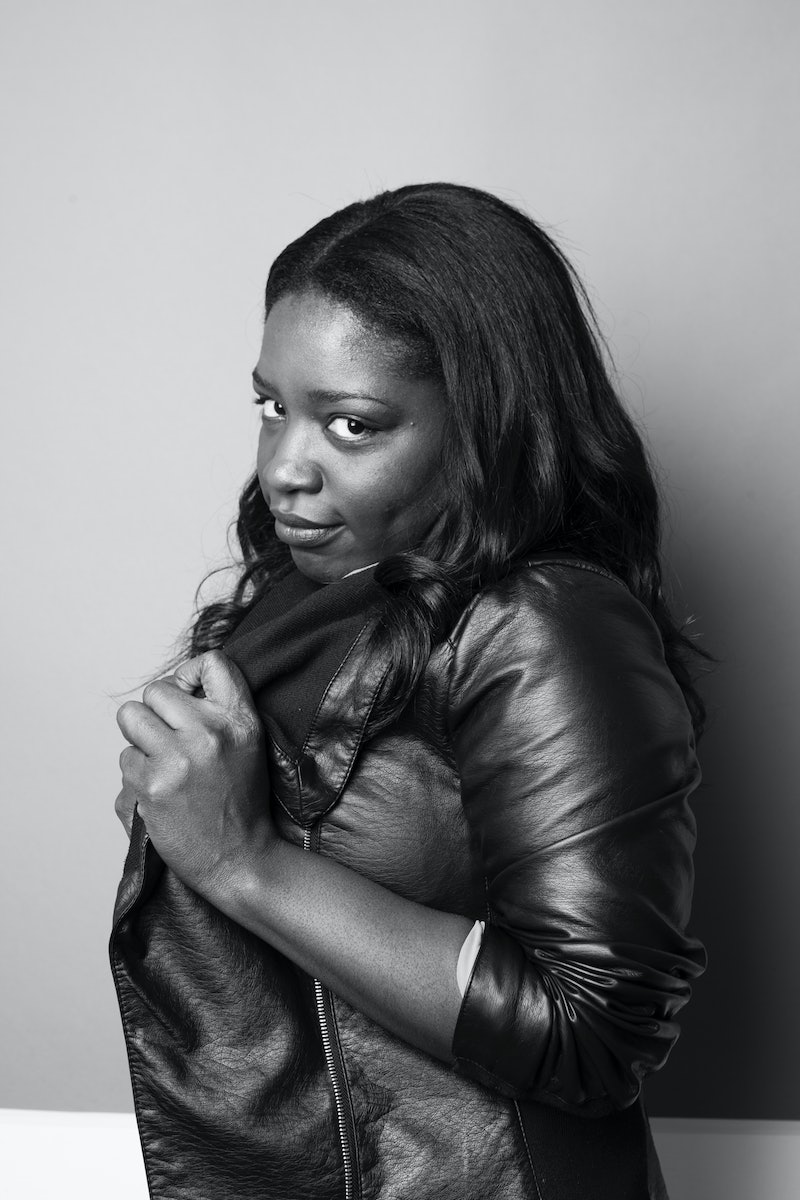 In the world of comedian Charla Lauriston's web series Clench and Release, New York City is a place fraught with awkward interactions — a place where, in any given moment, you're just as likely to run into your long-time crush or a public masturbater, and equally unsure of what to say to either. The series, which will begin airing its second season in early April, follows a young comedian named Charla as she (in Lauriston's own words) "chases love and stand-up in the face of fried chicken, slavery, dicks, and heartbreak." Lauriston's sharp observations about human nature and city life have done more than make viewers laugh; they also landed her a gig writing for the first season of Tina Fey's Netflix comedy, Unbreakable Kimmy Schmidt .

Lauriston, who began her stand-up career after moving to New York several years ago, was inspired to create Clench and Release by another web series: Issa Rae's Awkward Black Girl. "I just saw that and loved it so much," Lauriston tells Bustle. "But even more, I thought what she was doing was just so damn ... IMPORTANT. Like, here's this black girl with dark skin and natural hair, and she's writing this narrative that's engaging and FUNNY! She even raps to air out her frustrations! I related to it so much. I thought, 'I have a narrative too! I need to put it out there ASAP!'"

Lauriston will be debuting Clench and Release's new episodes during a screening on Wednesday, April 1, at Brooklyn bar Littlefield before they air online. To celebrate another season of awkward adventures in love, comedy, and fried chicken-shaming, we talked to Lauriston about beating your fears, being a weird little kid, and working with one of the world's most beloved comedy geniuses.

1. What was the weirdest thing you did as a kid?

"It's really a toss up between performing various experiments on the giant grasshoppers that dominated my family's backyard in Florida; befriending the super-old white lady next door who owned way too many Cabbage Patch Kids; or flipping out at my mom for not letting me live in the park."

2. What is your favorite piece of unsolicited advice to give?

"'Nobody cares about your fear.' Early in my career, I was in an improv show with some more experienced improvisors, and I barely got onstage the whole show. Then I kind of hesitated to come out for one of the scenes, and another improvisor literally grabbed my arm and pulled me on stage. It was such a defining moment in my life. I realized immediately, Uh, doy! Ain't nobody got time for my nervous, tepid, uncertain bullsh*t. Nobody gives a sh*t if I'm scared. Nobody gives a sh*t if I'm not ready.

3. What is the strangest thing in your purse/backpack/bag right now?

"This is not so much weird as it is gross — I have a smushed gluten-free apple-cinnamon muffin from Think Coffee. I buy them every time I pass by that coffee shop, because they're delicious and I love them. But sometimes I forget I have them, and it leads to an unfortunate smooshing. RIP muffin. I love you."

"I'm such a terrible liar — 100 percent of my lies are to get out of plans I don't feel like doing anymore, because I'd rather take a nap. They're super lame and they usually go something like 'OMG, I'm so sorry but I have a thing that I forgot to do, so now I gotta go do that thing instead of whatever thing I was supposed to do with you. So sorry don't kill me.'

Then I go take a nap. I just outed myself so hard with this one."

5. What is the most ridiculous thing that ever happened to you on tour?

"I flew to North Carolina to do a comedy festival and literally performed in front of four people. Two of them were other comics."

6. What is the best thing that ever happened to you on tour?

"I got the call to meet with Tina Fey while I was doing shows in Nashville."

7. What was the last book/movie/TV show/album to totally bowl you over?

"Kendrick Lamar's new album, To Pimp A Butterfly , is on repeat right now. Especially "The Blacker the Berry" and the live version of"'i." The album really speaks to all the racial tension going on in the country right now. It's heavy and uplifting at the same time. I'm a big fan. Also, I'm really late to the party, but the bae made me start watching The Wire and now we're on Season 4. It's one of those narratives that rings so true that it just stays with you. It's so brilliant and I'm so absolutely obsessed with it that I spend my down time looking up interviews with David Simon."

8. What was your favorite thing about working on the first season of Unbreakable Kimmy Schmidt ?

"Aside from learning from all the amazing writers on staff and getting to watch a frickin' TV show get made from the ground up, I absolutely loved watching Tina run her empire. She'd be doing interviews and writing for things and hosting award shows and her kids would come sometimes — all while she was on set and in the writers room. She was always just so chill and never overwhelmed or flustered. She'd just come to work like everybody else, not made up or anything, and just work. Plus, she hired a bunch of female writers who were also badasses, as well as absolutely hysterical and brilliant. It made me feel like I could have a family and an enormous career, and be a badass, too. She's a queen."

"It was so bad. It was about a moth that flew in my purse and the punchline was that the moth didn't respect my personal space. I repeat, it was so bad."

More like this
The Black Lotus Staff Has "Had Enough" In The 'White Lotus' Spoof From 'SNL'
By Brad Witter
Everything To Know About The 'Daisy Jones & The Six' TV Series
By Maxine Harrison and Brad Witter
'The Crown' Season 6 Has Suspended Filming "Out Of Respect" For The Queen's Death
By Bustle Staff
A New 'And Just Like That' Table Read Pic Confirms A Key Character's Return
By Jack Irvin and Grace Wehniainen
Get Even More From Bustle — Sign Up For The Newsletter
From hair trends to relationship advice, our daily newsletter has everything you need to sound like a person who’s on TikTok, even if you aren’t.