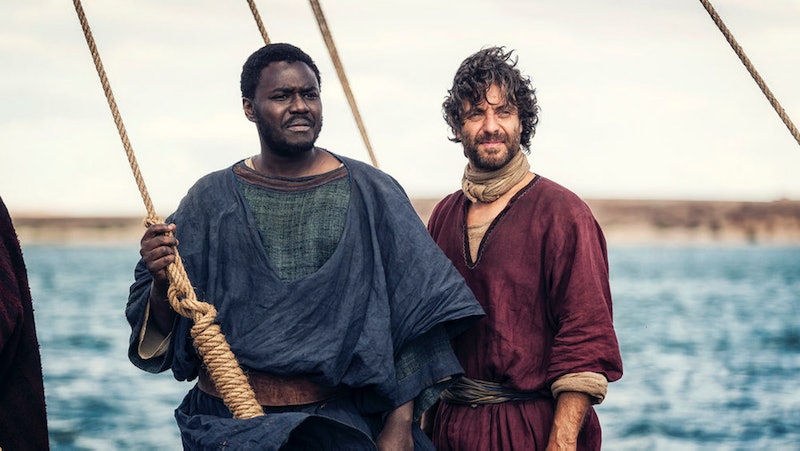 It seems totally weird to say that NBC is putting out a sequel to The Bible, and, yet, here we are. This Easter Sunday, April 5, the network will premiere A.D. The Bible Continues. In true sequel fashion, it's picking up right where its predecessor left off, after the crucifixion of Jesus. But it won't be totally seamless: A.D. returns with a new cast. So, who's taking over the reins to play John the Apostle in A.D. The Bible Continues?

John will be played by Babou Aliey Ceesay, best known for appearing in British series like Getting On, Luther, Lewis, and Puppy Love. Ceesay is taking this part very seriously, and has even said the role of John changed the way he looked at life. "He is the purest believer, the truest believer," he said in an interview with WNCN. "In playing that character, I've read a lot. I looked at the way that, as humans, we look at the world. And it's definitely had an impact in the way that I perceive the future and what's possible, and it's given me courage in certain aspects of my life." What kind of life is that? Here, some things to know about Ceesay's career.

He Didn't Go Straight Into Acting

According to Tellyspotting, he started off in finance, working in the London financial district as an internal auditor for Deloitte. Ceesay told the publication that there were some experiences there that he could draw from after he switched careers. "Well, auditing is very forensic," he said. "It’s financial forensics, really. As an auditor, [you] need to always know the detail, [by] asking 'what does this mean' and having the ability to pin people down to an absolute statement." As someone who dropped math the second it was no longer required of me, that seems like a backwards way of getting to the heart of a character — but whatever works!

Ceesay was recently cast as DC Alex Gray on Lewis, a crime show that airs on ITV in the U.K. This is notable because, as The Guardian wrote, "long-running ITV crime series do not have a strong track record with black actors." Ceesay told the paper that he's been seeing a lot more "blind casting" going on. "In the beginning there were only a couple of times per annum when I would be called for a part that was not necessarily black, but it has increased," he said. "That might be partly because I am more experienced now, though. Agents, casting directors and the big decision-makers in the industry seem to entertain the idea of experimenting."

Hopefully we'll see more of this diverse casting soon, as an ITV source told The Mirror last July, "There is going to be a real push here to get more black and Asian people on some of the biggest shows on the channel."

He Made The Leap To Movies

Ceesay also starred in Half of a Yellow Sun with Chiwetel Ejiofor, Thandie Newton, and Anika Noni Rose. The movie is set against the backdrop of the Nigerian civil war. His next film will be Eye in the Sky, a thriller with Aaron Paul, Alan Rickman, and Helen Mirren. Clearly, Ceesay can hold his own among an all-star cast.