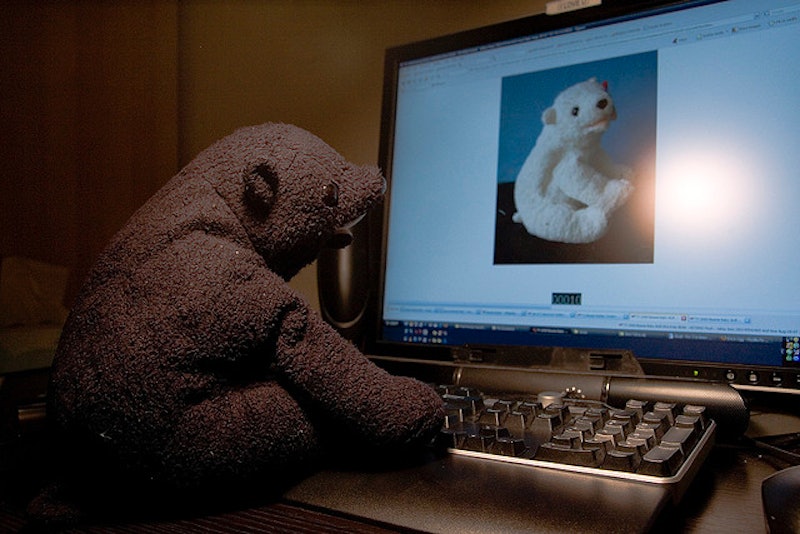 Once upon a time, online dating was seen as the province of losers who couldn't hack meeting love interests IRL. A Pew online dating survey shows how far we've come from those days, with 11 percent of American adults — and 38% of those who are currently “single and looking” — saying they've used an online dating site or app. "General public attitudes towards online dating have become much more positive in recent years, and social networking sites are now playing a prominent role when it comes to navigating and documenting romantic relationships," the organization notes. This is the first time Pew has polled Americans on dating in the digital era since 2005.

Online dating is most common among people in their mid-20’s through mid-40’s. In these age groups, the percentages of online daters is much higher than in the overall population. Among 25 to 34-year-olds, a total of 22 percent partake in online dating. For 35 to 44-year-olds, it's 17 percent.

So does this result in actual dates? Love connections? Survey says: Yes, indeed. These days, 5 percent of Americans who are currently married or in a long-term partnership met their partner somewhere online, and 11 percent of those who have been together for ten years or less did so.

More than 65 percent of online daters say they've gone on a date with someone they met through a site or app, and 23 percent met a spouse or long-term partner this way. This is up from 2005, when only 43 percent said their online activities led to actual dates and 17 percent to relationships.

Overall, attitudes toward online dating have become more positive in the past decade — though "a significant minority of the public views online dating skeptically," according to Pew. More than one-fifth of those polled said they see people who use online dating sites as "desperate." And 32 percent worry that "online dating keeps people from settling down" because they can always see other options.

Problems still plague the online dating world, however. More than half (54 percent) of online daters say they encountered someone who "seriously misrepresented" themselves in their profile, and 28 percent say they've been contacted by someone on these sites in a way that made them feel harassed or uncomfortable. Unsurprisingly, women are much more likely to report harassing contact (42 percent, versus 17 percent of men).

And the influx of social media since 2005 has also changed the online dating landscape. One third of social media users say they've used these sites to check up on someone they used to date or be in a relationship with. For Gen Y, 48 percent have been snooping on old flames via social media.

More like this
30 Sweet Valentine's Day Caption Ideas For Long-Distance Relationships
By Syeda Khaula Saad and Carolyn Steber
50 Valentine’s Day Instagram Captions To Post If You’re Single
By Jessica Booth, Lexi Inks and Carolyn Steber
Everything You Need To Know About Kanye's Post-Kardashian Dating Life
By Bustle Editors
Here’s What TikTok's "Mascara” Trend Is *Really* About
By El Hunt
Get Even More From Bustle — Sign Up For The Newsletter
From hair trends to relationship advice, our daily newsletter has everything you need to sound like a person who’s on TikTok, even if you aren’t.