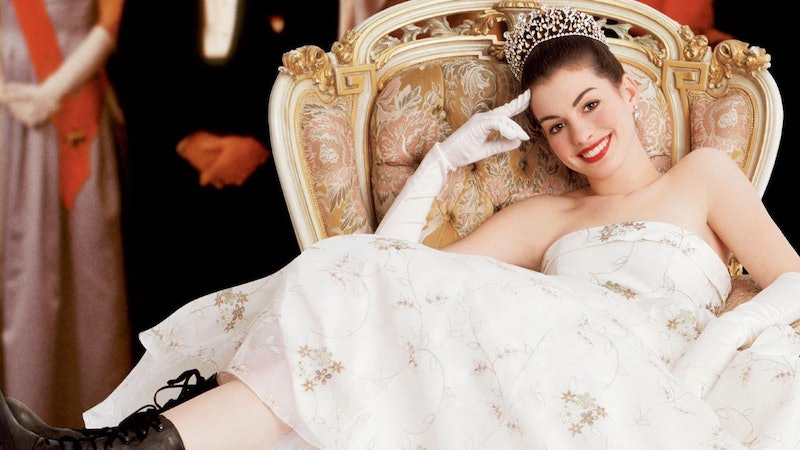 When Pretty Woman 's 25th anniversary came around last week, I realized something horrifying: despite being a fully-grown adult, a movie connoisseur, and a lover of '90s rom-coms, I had never seen the movie in full. Sure, I'd watched a few clips here or there and could spout lines from the most famous scenes, but as for everything that happened in between Hollywood Boulevard and Rodeo Drive? I was clueless. Thankfully, I decided to correct the issue last night, and watched all of Pretty Woman for the very first time. Needless to say, I loved it.

Unfortunately, though, I couldn't pay much attention to the gorgeous dresses and hilarious dialogue ("she rescues him right back," really?). Because while Pretty Woman is best-known as a movie about love and class and the not-so-accurate depiction of sex work, I discovered that it also has another important function: being the predecessor, and practically identical copy, to The Princess Diaries . Yes, I'm comparing the rom-com about prostitution to the teen movie about royalty, and no, it's not as crazy a theory as you think — despite their obvious differences, the two films actually have a lot in common. For instance:

It's no coincidence that both movies have the same director, Garry Marshall. He's the king of rom-coms and tearjerkers, having also made Beaches, Runaway Bride, and Valentine's Day, among others.

And A Ton Of The Same Actors

Marshall and Hector Elizondo (in Woman, above) have worked together over a dozen times, so it's no surprise to see the actor appear in both Pretty Woman and Princess Diaries. Yet it's not just him who shows up twice; Larry Miller, Allan Kent, Patrick Richwood and Kathleen Marshall are also in both movies. Kent even plays the same role — a waiter amused by the lead character's inappropriate behavior at an important dinner. Speaking of which...

The Dinner Scene is Exactly The Same

The young, nervous protagonist goes to her first important dinner function. She has no idea how to behave, so she enlists other people to teach her proper etiquette, yet still manages to embarrass herself. At one point, she accidentally loses control of an item she's holding, which leads to...

A Waiter Saying, "It Happens All The Time"

And not just any waiter, but Allan Kent. The same guy who reassures Mia Thermopolis that everyone breaks glasses at dinner also tells Vivian Ward that it's totally normal to cause snails to fly through the air.

The Montage Scene Is Identical

No good Garry Marshall movie is complete without a montage, preferably one that shows the lead character getting a life-changing makeover. In Pretty Woman, it's Vivian's shopping spree through Rodeo Drive, and in The Princess Diaries, it's Mia's transformation from frizzy-haired geek to a gorgeous, elegant princess. And both times, Larry Miller's character has something to do with it.

The Leads Both Bond With A Stiff But Secretly Caring Employee

And in both movies, that man is played by Hector Elizondo.

The Stars Are Young, Charming Newcomers With Huge Smiles

They may both be famous and acclaimed movie veterans today, but at the time of their films' releases, both Julia Roberts and Anne Hathaway were mostly unfamiliar to audiences. Roberts had been nominated for an Oscar, and Hathaway had a TV show on Fox, but both of them needed their respective Marshall films to truly break out in Hollywood.

And Neither Of Them Were The Producers' First Choice

Roberts became a star from Pretty Woman, but it nearly didn't happen; before choosing her, the film's producers offered the role to Molly Ringwald, Meg Ryan, Brooke Shields and Michelle Pfeiffer, among others, but they all turned it down or were eventually deemed unfit. And for The Princess Diaries, Hathaway was cast only after Juliette Lewis, Cameron Diaz, Reese Witherspoon, Claire Danes, Eva Mendes and more decided against the role. In the words of Vivian, "Big mistake. Big. Huge!"