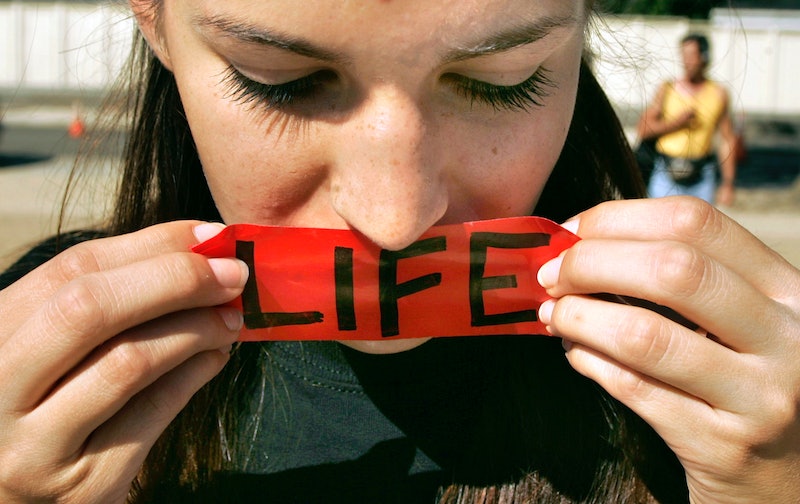 Misinformation about abortion isn't uncommon in America. There's the ever-present religious propaganda; crisis pregnancy centers passing themselves off as medical facilities; and even state-mandated counseling tailored to discourage women from having abortions. But on Monday night, Arizona took the misinformation one step further when Gov. Doug Ducey signed a law requiring doctors in Arizona to tell women abortion is "reversible." The measure only applies to women who are receiving medical abortions, which are induced by miscarriage-causing drugs.

The measure, SB 1318, was amended by conservative legislators in the state to inform women seeking abortion that it "may be possible to reverse the effects" of the procedure. However, Arizona doctors say that claim is unsupported by medical or scientific evidence.

In an editorial published on Arizona Central earlier this month, Dr. Eric Reuss of the Arizona Section of the American Congress of Obstetricians and Gynecologists urged legislators to rethink the provision, which he claimed is medically unsound:

If ever there is an example of Legislative overreach, this would be it. There is absolutely no evidence-based data that the [medication abortion] process can be reversed. If passed, our state government will force physicians to impart hearsay to their patients.

The law's "abortion reversal" provision is apparently based on the medical evidence of just one doctor, noted anti-abortion physician Dr. George Delgado. Delgado currently serves as the medical director of Culture of Life Family Health Care, a California-based nonprofit that purports to help women and families with unintended pregnancies. The nonprofit says it offers "a true choice to abortion methods" on its website.

Have you taken the first dose of the ABORTION PILL, MIFEPRISTONE (Mifeprex or RU-486)? Do you regret your decision and wish you could reverse the effects of the abortion pill? We are waiting to help you! There is an effective process for reversing the abortion pill, called ABORTION PILL REVERSAL, so call today!

However, abortion providers have said that Delgado's regimen is not so much a "reversal" but an interruption or intervention of the medical abortion process. Women who terminate a pregnancy with the so-called abortion pill actually take two pills — a dosage of mifepristone, which has historically been known as RU 486, then a dosage of misoprostol. There is usually a 24-hour window between the two dosages, in which Delgado believes the effects of mifepristone can be nullified.

The first tablet, mifepristone, alone, can be up to 60 percent effective in ending the pregnancy, so 40 percent would continue. Mifeprex has an eight times higher affinity for the receptors than real progesterone, so you’d probably have to flood them with toxic levels of progesterone to even make an effect ... There is no medical data or any legitimate studies done to show this is effective.

But the informed consent — or should we say "misinformed consent" — of "abortion reversal" isn't the only harmful provision of the law. SB 1318 also prohibits federal health insurance plans operating within the state from covering abortion procedures in all cases except for rape, incest, or when a woman's life is at risk. Previously, women could purchase a rider — by paying an additional insurance premium — to cover the cost of an abortion procedure. Although there's no breakdown yet by gender, more than 204,000 Arizonans are currently enrolled in an insurance plan through federal exchange marketplace; a majority of those enrolled received a subsidy.

"The American people overwhelmingly oppose taxpayer funding of abortions, and it's no different in Arizona, where we have long-standing policy against subsidizing them with public dollars," Ducey said on Monday in a statement.

Yet reproductive health advocates fear this provision will negatively impact low-income women. Currently, Arizona blocks state Medicaid funding from covering most abortion procedures, forcing women enrolled in the program to pay out-of-pocket for an abortion procedure. Now, those enrolled in plans created through the federal exchange marketplace will meet the same fate.

According to research from the Kaiser Family Foundation, 56 percent of the 3.1 million American women eligible for insurance through the ACA marketplace live in a state where abortion coverage is denied — this means nearly six in every 10 uninsured, low-income women are denied abortion coverage. As more "red" states eye marketplace insurance bans on abortion, it's likely thousands more American women of reproductive age will be unable to receive insurance coverage for the procedure.

Without insurance coverage, Arizona women could expect to pay between $500 and $1,500 out-of-pocket for the abortion pill or a surgical abortion. Camelback Family Planning in Phoenix, for instance, charges $580 for the abortion pill and between $580 and $880 for an abortion up to the 16th week of pregnancy (late-term abortions can cost up to $2,200 at the clinic). Meanwhile, Planned Parenthood Arizona says the average cost of a first-trimester surgical abortion at one of their facilities is $515, with an additional $75 ultrasound charge.

"Purchasing health insurance can often be a complicated task and anti-choice politicians are adding yet another burden to getting health insurance coverage that works for women in the state," National Abortion Federation President Vicki Saporta said Tuesday in a statement. "Unfortunately, Governor Ducey has shown a complete disregard for medical evidence in order to score points with abortion opponents, and has placed politics ahead of the health and safety of women in Arizona."