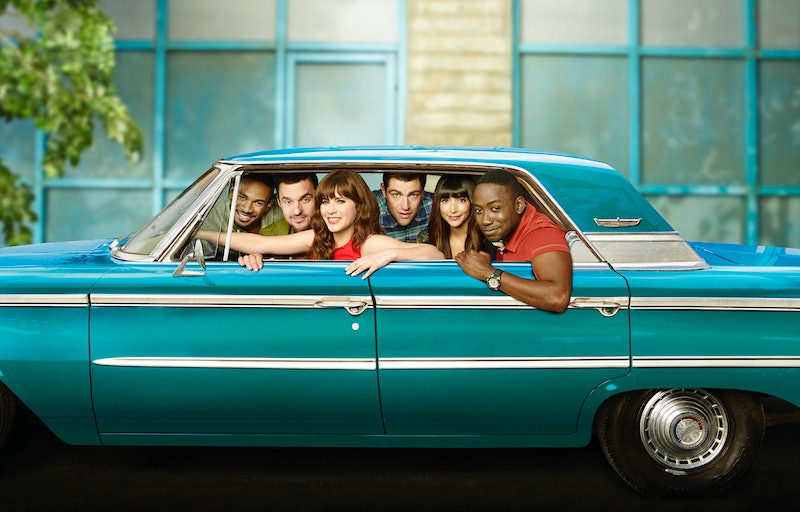 Before Season 4 has come to a close, New Girl was renewed for Season 5. That's just the tip of the iceberg of good news, though — the show is also welcoming two big guest stars to the loft. TVLine reports that Selfie's John Cho will play a "guy Jess meets when she excitedly reports for Jury Duty" (because only she would be stoked for that) and SNL alum Taran Killam is Jess' new boyfriend, Fred. He also brings along an amazing set of parents, played by Henry Winkler and Julie Haggerty, and apparently Jess loves his family so much that she considers not breaking up with him. Since she can't seem to hold a boyfriend these days — miss you, Ryan — it likely won't last long with Fred, so maybe Cho can sweep her off her feet instead.

On that note, I have plenty of ideas for Cho's role, mostly because I miss Selfie so much. In a perfect world, he would just play his character from the canceled ABC comedy and bring Karen Gillan along with him, but since that's pretty farfetched, there are a few more realistic ones, like him charming Jess, becoming bros with the guys in the loft, or taking over Coach's job when Damon Wayans, Jr. leaves the show again. Check 'em out below — I'd honestly be happy with any of the above, as long as he sticks around.

Bringing Back Henry from Selfie

He would have to bring Gillan's Eliza along too, of course. He would probably get along well with Jess' slightly-neurotic, weird side, and she could make him have some more fun.

Sweeping Jess Off Her Feet

Eliza can never be replaced, but he could ride in on a white horse for Jess and be a friend first, then a great boyfriend. In this case, I can see his New Girl character being genuinely romantic and understanding of her whole living-with-her-ex situation.

Being The Fun New Addition To The Loft

With Coach leaving again, they could either find a new roommate, or maybe Cho could be the new gym teacher at school. He's not as muscular as Coach, but he would be great with kids and have some fun karaoke sessions and True American games with the gang.