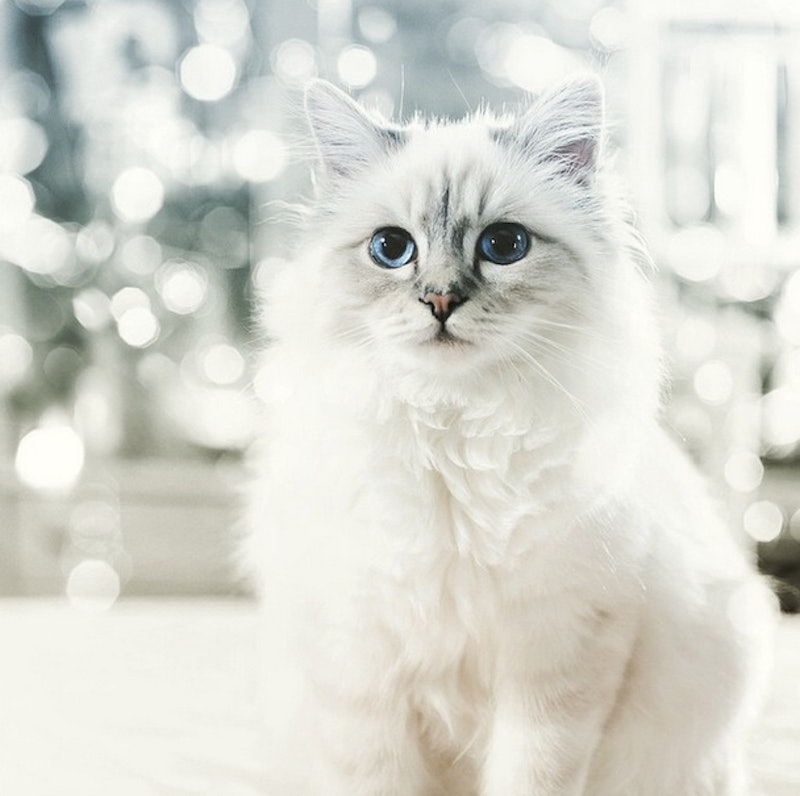 Karl Lagerfeld’s cat gets a fair amount of attention for being, well, Karl Lagerfeld’s cat, but also because she’s got a whole PR team and is more famous than any of us will ever be, probably. In an interview with The Cut, Lagerfeld talks about Choupette, his beloved cat who is worth several million dollars, for the majority of the conversation. He talks about other things of course, like his parents, maintaining an air of superficiality, and being a “fashion vampire” who sucks the life out of everything he encounters (presumably). But mostly the cat, whom he clearly adores.

Did you know that Choupette has her own Wikipedia page? Did you know she also has her own Twitter account with more than 40,000 followers (“I am Choupette Lagerfeld and I am Daddy @KarlLagerfeld's spoiled pussy whose maids pamper her every need.”)? How about her Instagram feed? Her book deal?! DID YOU KNOW that this cat is an actual living deity in the eyes of Karl Lagerfeld? Well, now you know.

Choupette knows more love, more kindness than many of us will ever know. Here are some things that we learned about her from the mouth of her Papa Lagerfeld himself:

1. She does as she pleases

Choupette keeps Lagerfeld company, sure. But it’s very much on her own terms. “I see nothing, I do nothing,” he says about posting up in his Ivory Tower, I mean, Mercer Hotel suite. “I do everything from my room in the Mercer, working at my desk on things with Choupette keeping me company — I don’t force her, by the way. She comes naturally.”

2. She chose this life

“It’s a miracle in the story,” he tells The Cut. “Choupette was not even given to me. Choupette belonged to a friend of mine who asked if my maid could take care of her for two weeks when he was away. When he came back, he was told that Choupette would not return to him.” Of course not. “He got another cat who became fat, and Choupette became the most famous cat in the world, and the richest.” The cat is evidently also vindictive, which is totally on brand.

3. She is an entrepreneur with refined taste

“She did two jobs and made 3 million euros last year.” 3 million euros. “One was for cars in Germany and the other was for a Japanese beauty product. I don’t allow her to do foodstuffs and things like this. She’s too sophisticated for that.”

4. She doesn’t play well with others

“She hates other animals and she hates children.” Same, honestly.

5. She has personal maids

“She stays always with me and she has two personal maids. They play with her, they have to take care of her beautiful white hair, the beauty treatments for her eyes, and they entertain her.”

6. She is the center of the world

“She is the center of the world.” Or, Karl's world, at least.

More like this
Here Are All 703 Outfits Rachel Wore On Friends
By Kat George
The Best Heels For Bunions, According To A Podiatrist
By Margeaux Baulch Klein and Maria Cassano
The Definitive Guide To Every Real Housewife Beauty Brand
By Audrey Noble
Khloe Kardashian's Mermaid-Length Waves Give Major Goddess Vibes
By Olivia Rose Ferreiro
Get Even More From Bustle — Sign Up For The Newsletter