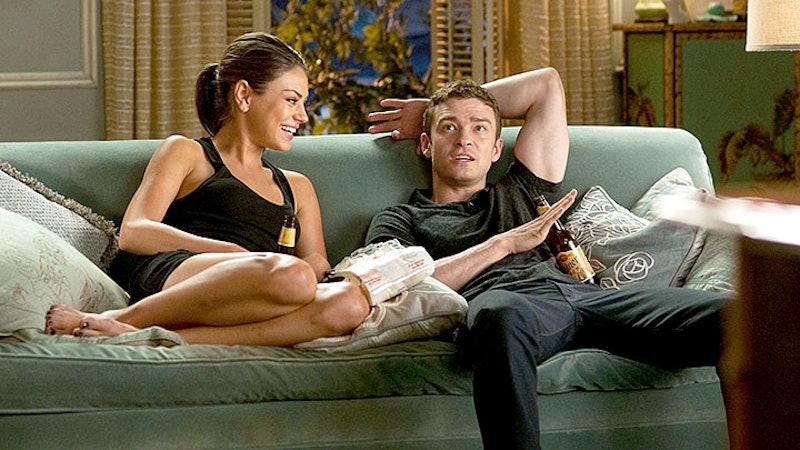 Findings from a study on casual relationships is out, and it’s not looking good for those of you hoping to your hookup will become a romantic relationship. In fact, the chances that a friends with benefits situation can become more are so slim, that you either accept it now, or bail. Unless, of course, you like a challenge, then by all means go for it.

The study of 191 people ― the majority of whom were white, straight, women with an average age of 30 ― in friends with benefits situations found that, after a year’s time, only 15 percent of them were able to make their FWB into a serious relationship. What we can deduce from this is that Hollywood was, once again, lying when they made Justin Timberlake and Mila Kunis a legit couple in the movie Friends with Benefits, which should have actually been titled Friends with Benefits Fall in Love Defying All Logic and Science.

The study also found that after that year had passed, 31 percent no longer had anything to do with their FWB, 28 percent were back to being friends sans the sex, and 26 percent were still doing the FWB thing.

Having had a friend with benefits for far longer than I care to admit, I can understand how after a year’s time the majority of those in this study no longer had any sort of relationship with their FWB. I made the mistake of falling in love with mine, hoping beyond hope to be in that aforementioned 15 percent, but it never happened. What did happen was that my heart was broken and I ran off to Paris to cry my tears into a stack of macarons, you know, as one does.

Of those in study, 60 percent were able to eventually go back to being just friends, but the success rate of that outcome was contingent upon the communication and ground rules that were covered beforehand. Those FWB relationships that hadn’t taken the time to specify the details of the arrangement were more likely to lose that relationship all together as time went on.

Since my own FWB experience forever changed me, I’ve been adamantly against them. I foolishly thought that I could sleep with him without even a single emotion coming into play, but I was wrong. However, in my defense, we were inseparable and were pretty much in a relationship, just without the commitment, especially on his end. If you can sleep with your friend, keep it strictly about sex, and walk away unscathed, then awesome. But if, even for the briefest of seconds, you think you want more, then run. You have a better chance of getting herpes than making your FWB into a relationship. Now that’s some science to ponder.