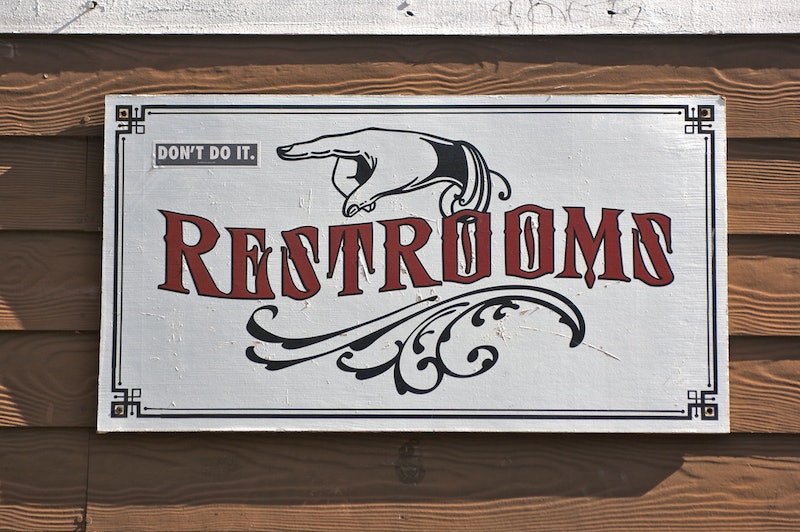 One of my favorite things about traveling is undoubtedly trying all sorts of amazing foods we can't typically find in the US of A. One of my least favorite things about traveling, though? Figuring out how the toilet situation works. But hey, at least BuzzFeed has my back with their “Pooping Around the World” video. True, it doesn't answer every toilet-related question you might have — the world is a big, wide place, after all — but it's a good place to start. It also features the smiling poo emoji taking an epic trip around the world, and, well… that's just kind of hilarious to watch. Maybe I'm just easily amused, but whatever. It's amazing.

The video features a few interesting bits of trivia about toilet etiquette, architecture, and more — although speaking from personal experience, one very important tidbit got left out: What you do with toilet paper once you've used it. Although it might seem like a no-brainer, it actually varies by country based on what the sewage systems can handle. In some places, it's OK to flush it; in others, though, it should be deposited in a bin kept right near the toilet. Toilet Guru has some useful pointers, so if you've got any lingering doubts, head on over there to find your definitive answer.

In any event, though, the video does cover some pretty good ground — check out a few highlights below, and scroll down to watch the whole video. Oh, and while we're at it, remember: It's over, not under!

In Germany, Austria, and a few other places (the Internet tells me France is one of them), it's apparently not uncommon to find something called a “washout toilet.” This fascinating little invention comes equipped with a shelf inside on which everything lands — the idea being that you can then inspect your business before it goes down the drain. Just, y'know, to make sure everything is A-OK. However, it's seemingly also meant to prevent any embarrassing splashing or noises caused by your excrement dropping into the bowl. TIL, right?

I'm not really a camper—in fact, I actually don't think I've ever been properly camping with a tent and everything in my life—so this one was new to me: A lot of parks in the United States require campers to bag up their waste in “WAG bags” lined with a powder that squashes odors and promotes decay. This actually makes a lot of sense when you think about it; after all, nothing ruins a nice hike like coming across a freshly-made pile of human poop. Or an old pile of human poop. Really, any pile of human poop is day-ruiner.

3. Whatever This Contraption Is

Apparently some toilets in Japan are kitted out with all sorts of stuff you not only never knew you wanted, but moreover, which you probably never even knew existed. According to BuzzFeed, these fancy-schmancy commodes can include things like bidets with controls for water pressure and direction, dryers, music and sounds, volume controls for the music and sounds, massagers, and more.

However, it's also worth noting that it's pretty common to find what's called a “squat toilet” in Japan and other East Asian countries (there's an incredibly memorable moment in An Idiot Abroad in which the hapless Karl Pilkington finds himself faced with a squat toilet for the very first time in China) — but don't freak out. This handy illustrated guide on how to use a squat toilet will help. Learn it. Love it.