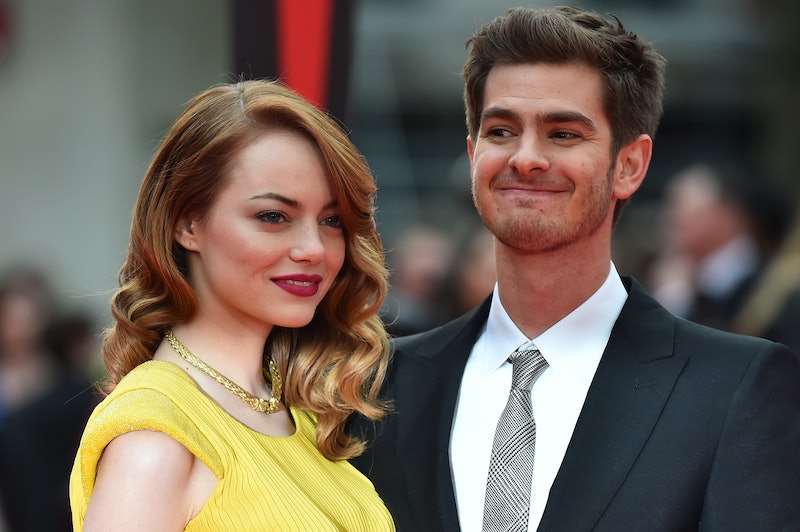 Get out the tissue box, because another celebrity couple is reportedly dunzo. According to VH1's The Gossip Table, Emma Stone and Andrew Garfield split after over three years of dating. Reportedly, the two decided it was best to take some time apart, because of their busy schedules. Star magazine also reports Stone and Garfield, who starred together in The Amazing Spider-Man, aren't necessarily over for good, but are just taking some time for themselves.

A source who spoke with Star said, "It's clear they've drifted apart. It's an unspoken issue, but everybody knows they are on hold." That same source also revealed the reason behind Garfield not attending the Oscars or Golden Globes with Stone, who was nominated for Birdman. "Andrew was filming, but he could have gotten away if he really wanted to. The fact was, neither one of them wanted to plaster on a smile and pretend everything was okay when it wasn't,” the source said.

Bustle reached out to their reps for comment and will updated if/when we hear anything. Until then, we can only hope this news isn't true, because it's Garfield and Stone were basically the perfect couple. From their famous photobombing moment to that time they held up that charitable sign for paparazzi, Garfield and Stone have stolen fans' hearts repeatedly. So this reported breakup news is just plain sad.

Also, there might be a silver lining. The story was first reported on April 1, which means this is just an April Fools' joke, right? Here's hoping.