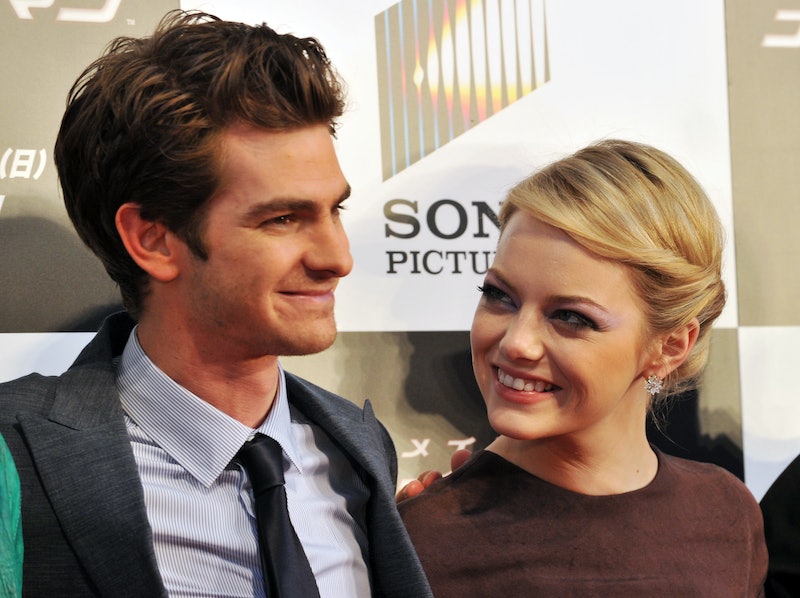 Ever since they first revealed their relationship, I've been obsessed with Emma Stone and Andrew Garfield as a couple. In photos and in their interviews both separate and apart, they've always seemed like the poster children for a stable, healthy relationship between two successful (and beautiful) people. Through it all, they've supported each other and spoken openly and lovingly of each other, and now, it sounds like their amazing relationship might actually be over. According to Star magazine, Garfield and Stone have split due to conflicting schedules and drifting apart, and if that sentence alone doesn't make you question everything you've ever believed about love, I don't know what will.

Before anyone panics too much, let's keep in mind that the news has yet to be confirmed. Bustle has reached out to Garfield and Stone's reps for comment, but has not yet heard back. There's still a chance that they're still together... but just in case they're not, we, as a nation, should probably be prepared for the worst.

In the event that we do receive confirmation that Stone and Garfield are, in fact, over, I've prepared a handy list of ways to cope with their breakup without flinging yourself off a building or renouncing love forever — as much as you might want to. Don't worry, guys. We can get through this together!

Because seeing Stone and Garfield fall in love on-screen as Gwen Stacy and Peter Parker is probably the cutest thing in the world, and watching it while knowing that their off-screen relationship is kaput will be the perfect opportunity to get all those tears out that you've been waiting to cry. It's only natural to be a little down when your relationship ends. OK, so maybe I'm not actually in their relationship and neither are you, but it feels like we are!

The precious interviews. The adorable red carpet moments. That time when Andrew Garfield described Emma Stone as "sunshine", and said that "I will write a book one day about how I feel about every aspect of Emily Stone." I'm not crying, you're crying.

Remind Yourself That Love Still Exists

Because there are plenty of celebrity couples who are still making it work, and we can't forget them. Mila Kunis and Ashton Kutcher? Still going strong, and now they have a daughter. Ryan Reynolds and Blake Lively? Still hanging in there. Real love is all around us! It will be OK!

If All Else Fails? Ice Cream

And lots of it. If you need to eat an entire pizza by yourself while watching old Stone and Garfield interviews on YouTube, I promise not to judge. I'll be right there with you.

More like this
Chloe Pirrie Is Ready To Take The Next Step
By Sam Ramsden
Who Is Camila Cabello Dating? She's Getting Cozy With Lox Club CEO Austin Kevitch
By Radhika Menon
Kim Kardashian & Pete Davidson’s Relationship Timeline From Start To Finish
By Jordyn Tilchen and Bustle Editors
'A League Of Their Own' Star Abbi Jacobson Is Engaged To Jodi Balfour
By Jake Viswanath
Get Even More From Bustle — Sign Up For The Newsletter