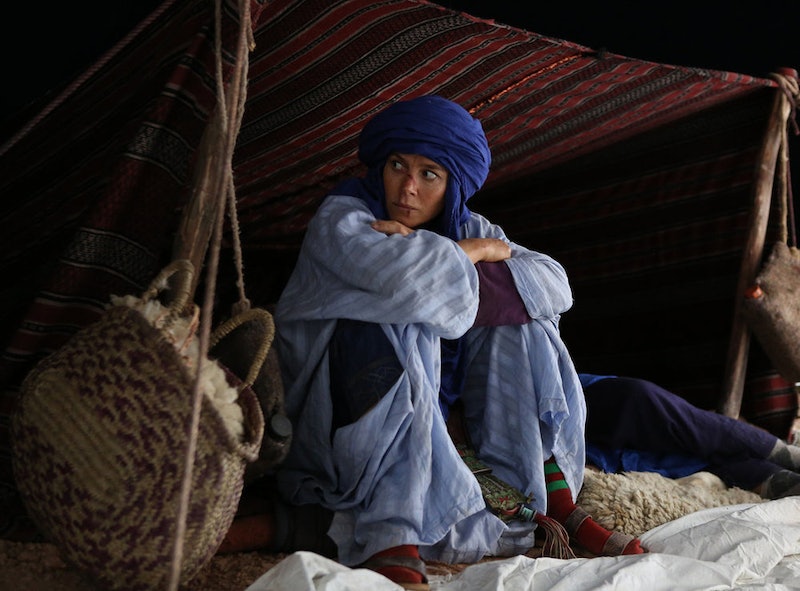 Poor Sergeant Odelle Ballard. As the main character of American Odyssey, which premieres on NBC on April 5, she’s got problems. She’s the only female member of her unit, she’s under fire from jihadists in North Africa, and — after her unit discovers an American company was funding the terrorists — is under attack from that organization as well, and all she wants to do is make it home to her family. That’s a lot for an actress to chew on. But if you’ve seen commercials or posters for the show and thought, “Hey, is that Evangeline Lilly?” you’re not alone — my husband and I both thought that independently of each other for a long time — but you are wrong. So, who plays Odelle Ballard in American Odyssey ?

The real actress is Anna Friel — and yes, the American Odyssey actress is actually British. But even if you know her from her work in U.K. television, you can be forgiven if you didn’t recognize her in ads. She underwent a huge transformation to play Sergeant Ballard. The London Evening Standard reports that Friel said she went through “six weeks of bootcamp training, putting on a stone and losing all [her] hair” for the role. It’s a big departure from her usual comedies. Here are a few things Friel is known for.

She Was The Heart-Meltingly Adorable Chuck In Pushing Daisies

I will never stop talking about how amazing, if brief, Pushing Daisies was. I’m just never going to get over it. In the show, Friel played Chuck, the girl of Ned the Piemaker’s dreams — except she was brought back from the dead, and if he touched her, she’d die again. (That’s just the way it was.) Chuck was adorable and plucky, and everything on that show was sweet, pretty, and colorful — basically the opposite of American Odyssey in every way possible.

She Held Her Own Against Will Ferrell

Sure, it was in Land of the Lost, which was, well, not a huge success. In fact, it may have blown her chances to be a big movie star for a while, since she didn’t have a Hollywood outing after that. But I think Land of the Lost is underrated, and I bet it’ll achieve cult status someday.

Friel has been in a bunch of stage shows, including a version of Breakfast at Tiffany’s that had her doing a nude scene. That’s not something Audrey Hepburn had to contend with. She also went blond for the performance.

Friel has a daughter, Gracie, with actor David Thewlis (aka Remis Lupin), and has also been involved with Rhys Ifans (aka Luna Lovegood’s dad, Xenophilius). And yet, no role for Friel; don’t you think she would’ve made a perfect Tonks? Oh well.

The actress has said life can be complicated with so many performers involved. “I don’t want [Gracie’s] schooling to be disrupted, so at the moment I’m paying two sets of school fees,” she told The Telegraph. “Fees here in Britain and fees to keep her place open at her school in LA. Fortunately, she’s happy in both environments and it’s quite funny to hear her accent change accordingly.” It’s a funny thing to say, considering Friel will be taking on a much different accent than her own in American Odyssey.