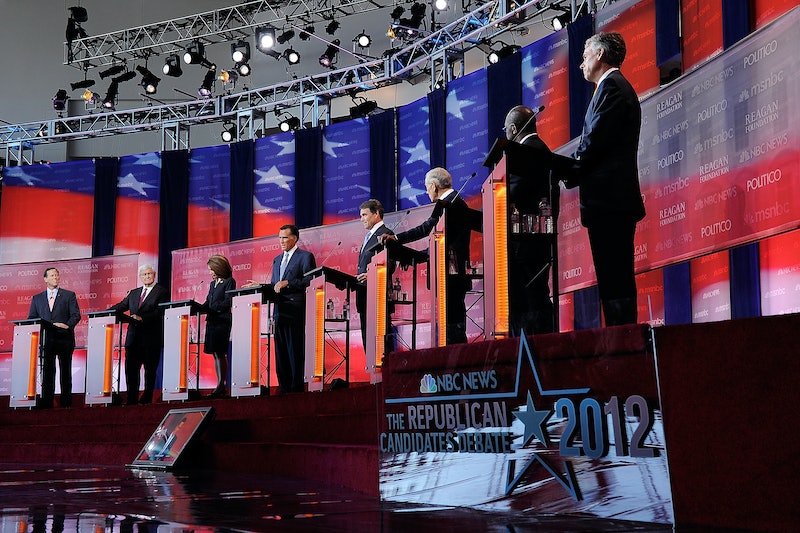 Now that world powers have reached a preliminary framework for an Iran nuclear deal, U.S. presidential candidates are weighing in on U.S. foreign policy toward Iran. These are the folks who want to be president and would have a lot of clout over how the U.S. engages Iran in the future. So what do the likely Republican presidential candidates think of the Iran deal?

Firstly, the U.S. isn't the only nation striking a deal with Iran. The agreement also includes Europe, Russia, and China. So even if a future U.S. president isn't pleased about the new nuclear arrangement, and decided to reverse it in office, Iran still wouldn't be locked out of the international community once again. Though, whoever is elected president would have a say over whether the U.S. continues to abide to a final agreement. So it's important we find out what their positions are.

Hillary Clinton's take on the Iran agreement was a bit more optimistic than her Republican counterparts — wait, and see what happens. Her released statement said:

There is much to do and much more to say in the months ahead, but for now diplomacy deserves a chance to succeed.

But what about those on the other side of the aisle — what are some of the Republican presidential contenders saying about the Iran deal?

The Texas governor took to Twitter to express his apprehensions about the Iran deal.

In a written statement he also said: "If I were president today, I would suspend negotiations and ask Secretary Kerry to come home immediately." Adding that he has "long believed that no deal is better and safer than a bad deal."

When The Huffington Post inquired to Paul's office about the Iran deal, his spokesperson Sergio Gor said:

Senator Paul is out of pocket all week with family leading up to April 7th. At this time our office will have no comment to any news.

So maybe we will know after he officially announces?

. . . I will pull back on that on January 20, 2017, because the last thing — not just for the region but for this world — we need is a nuclear-armed Iran. It leaves not only problems for Israel, because they want to annihilate Israel, it leaves the problems in the sense that the Saudis, the Jordanians and others are gonna want to have access to their own nuclear weapons . . .

Bush issued a statement explaining his opposition to the Iran deal:

These negotiations began, by President Obama’s own admission, as an effort to deny Iran nuclear capabilities, but instead will only legitimize those activities.

Nothing in the deal described by the administration this afternoon would justify lifting US and international sanctions, which were the product of many years of bipartisan effort.

But unlike some of the other potential Republican contenders, Bush was a bit more pragmatic as he did not explicitly say that he would throw out any agreement reached.

After a town hall in Iowa, Cruz told reporters what his real problem was — the Iran deal not being passed through Congress:

The very first step for any deal, good or bad, should be submitting it to Congress, and the President making the case both to Congress and to the American people why this advances the national security interests of the United States.