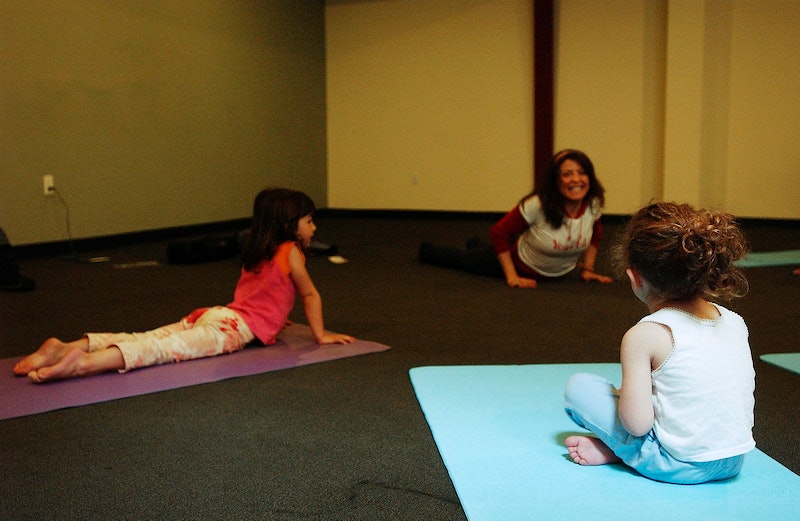 In a happy day for any child who enjoys contorting themselves into various positions on a mat: It seems that the California courts have ruled that yoga classes in schools are not a violation of children's religious rights. And yes, that was a real thing people thought the courts needed to sort out. In fact, including appeals they've been sorting it out for two years now. Hooray for the American judicial system.

The case was originally brought in 2013 after parents from the Encinitas School District alleged that the school's yoga classes, which were offered as an alternative to traditional gym classes, were actually unconstitutional and promoted eastern religion. Plaintiffs Stephen and Jennifer Sedlock felt that, because yoga is rooted in Hinduism and Buddhism, that offering yoga in public school was a violation of the religious rights of children. Which is why they not only opted out of yoga classes for their own children but tried to shut down all yoga classes in the district.

The lower court originally ruled against the concerned parents in July of 2013. But the Sedlocks were undeterred by the judge's decision that although yoga "at its roots is religious," yoga as practiced in modern-day America "is a distinctly American cultural phenomenon" that could be done completely secularly. They appealed the case, and now, almost two years later, the appeal's court has upheld the previous ruling.

In other words, children everywhere can still mess up yoga poses just like the rest of us.

The appeals court in San Diego wrote in a unanimous opinion, “While the practice of yoga may be religious in some contexts, yoga classes as taught in the district are, as the trial court determined, ‘devoid of any religious, mystical, or spiritual trappings.'"

Which should be a great big "Duh" to most anyone who's ever been to a modern American yoga class. I myself have been to quite a few different styles of yoga classes, and I can attest that some are more spiritual than others, but that even the most spiritual aren't anything I would describe as actively religious or advocating for any specific religion. And I've also been to quite a few yoga classes that were no more spiritual than a step-aerobics tape.

Whether or not it's OK that Americans have taken yoga and de-coupled it from its original, deeply meaningful, religious significance and turned it into a secular workout routine is, of course, an important question. But it does mean that there's really no harm in teaching yoga to kids in public school. Like I said, it's entirely possible to teach yoga from a purely secular perspective.

And unless the parents in this case want to appeal all the way to the California Supreme Court, the case is hopefully settled once and for all.