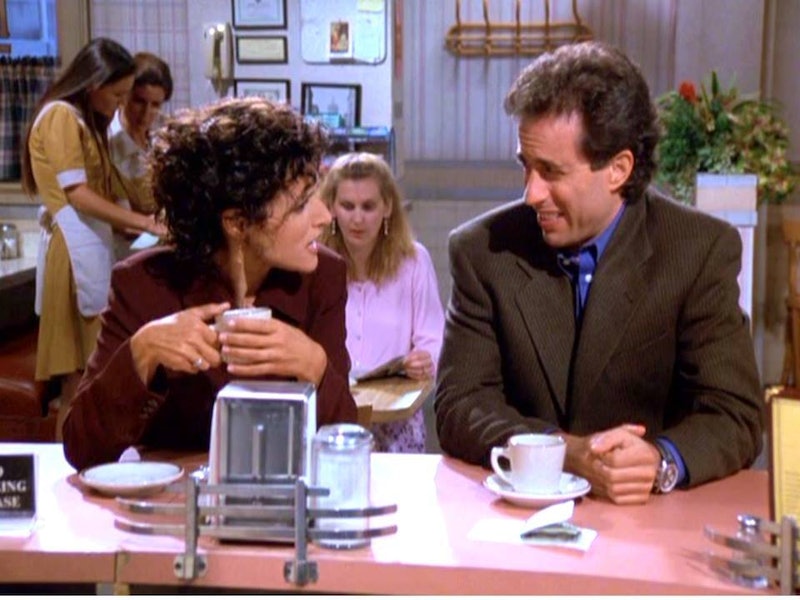 Whether you're the dumper or the dumpee, breaking up is hard to do. Sometimes, you have to end a relationship for serious reasons, and other times not so much, as is evidenced by the great comedy of Seinfeld and the infamous "man hands" dilemma--so naturally, because we don't get enough Seinfeld in our lives anymore, a genius took to Reddit to ask women the most Seinfeld-esque reasons they've ever broken up with someone. For those of you who never watched the show, (full disclosure, I've probably seen a total of ten episodes in my life), a "Seinfeld-esque" reason basically boils down to something trivial and possibly shallow--like, for instance, if you go turn down a second date with a guy because he had really bushy eyebrows and all you could do during the first date was stare at those Groucho Marx brows.

I've hand-picked the 10 most Seinfeld-y breakup reason and compiled them for your convenience below, although I highly recommend checking out the full thread for all the trivial things that caused relationships to end. I've got to admit, reading all these responses has got me thinking if there's a guy out there who never texted me back over something like my laugh being weird, or some weird phrase I might have used in conversation, or...you know what? Before I get too deep down the rabbit hole and start frantically texting near-strangers from my contact list, let's just get into these other ladies' answers.

1. I could totally picture this happening to Elaine.

This is probably one of the most Seinfeld answers in the entire thread. Although, to her credit, I just tried to bop my head sideways to "What is Love?" (because if there's any song to sideways bop to, it's that one), and it made me feel pretty dizzy and all-around unpleasant. How that mystery guy does it all the time is beyond me.

2. A date with the male Mona Lisa Vito

This is just..weird. It's cool to have a passion, but why would you just throw it into every story? Can't say I blame this girl for declining a second date. Although I'd maybe keep this guy's number on hand in case I had car trouble.

Definitely a trivial reason to break up, but what are your other options? Ear plugs? Being constantly somber? Begrudgingly putting up with it until your resentment spirals out of control?

This is by far my favorite response in the whole thread, and even though it's sooo silly, I do not blame this person at all! At some point, you have to ask yourself what's worth it. Driving around aimlessly in search of parking is definitely not worth it to me. Call me when you live somewhere with a parking deck.

I swear, what is it with guys and long toenails? Most of the dudes I've interacted with have had horrendous toenail upkeep (if that's even the right word). Clip it up, fellas!

6. The better to hug you with, my dear

Ah yes, to dump someone over the occasional occurrence they wear a jacket...makes total sense.

Okay, every so often I'll type like that for effect, but to have the actual words that come out of your mouth sound like that? Wut.

8. A guy who was dooooing it wrong

I would love to see this scene come to life on TV. Hilarious!

I'm more curious about what the tattoos were actually of. OP, please deliver!

Oof, camo cargoes. Double-whammy. That guy got what was coming to him.

More like this
TikTok’s Viral “Rating Game” Is Exposing Everyone’s Icks
By Courtney Young
'Strictly’s Karen Hauer Had A Good Reason To Keep Her Wedding Under Wraps
By Maxine Harrison and Frances Stewart
Are Gemini & Leo Compatible In A Relationship?
By Kristine Fellizar
Melony & Gia Prove That Couples Who Grow Together, Stay Together
By Jessica Morgan
Get Even More From Bustle — Sign Up For The Newsletter