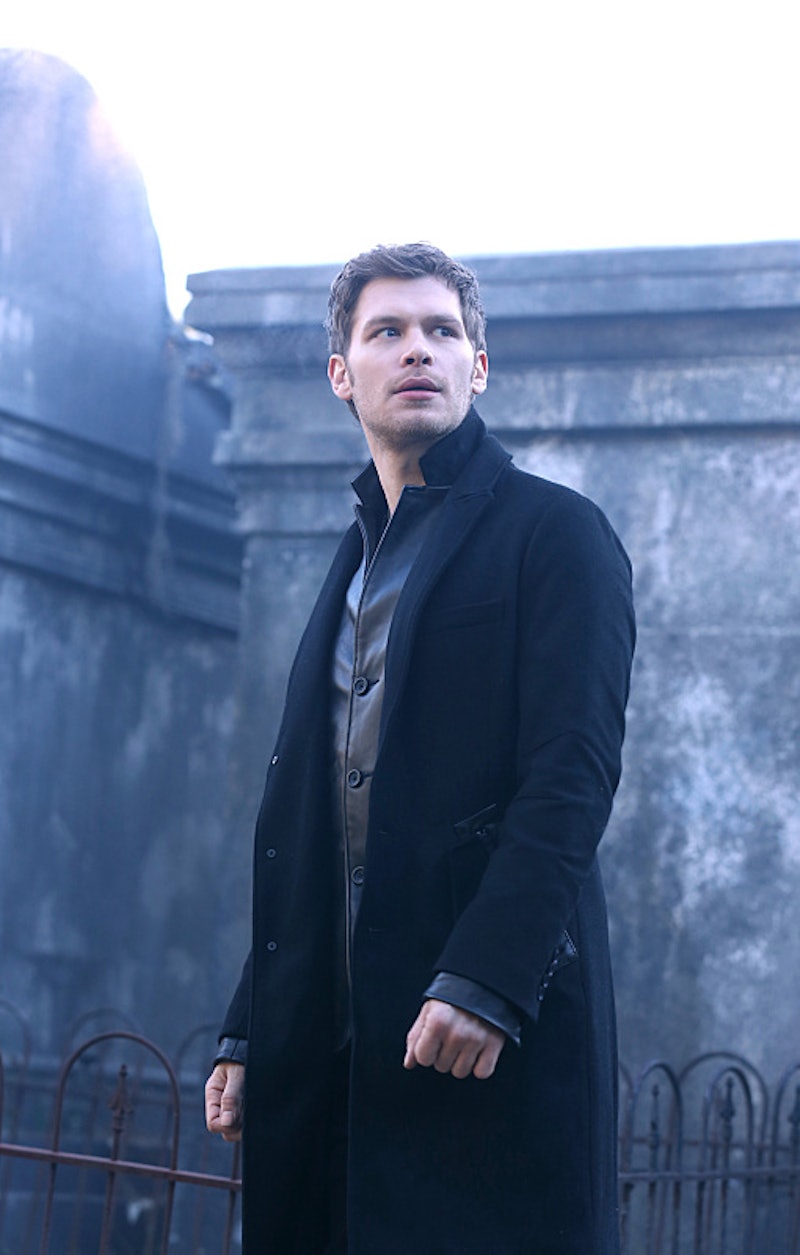 I had a feeling the peace on wouldn't last. Since The Originals mid-season finale Klause Klaus has been suspiciously well behaved, dealing and negotiating to get his own way. Sure, there's been backstabbing a-plenty but way less heart ripping out then I've grown accustomed to. He's not exactly a teddy bear (still too prickly) but he's been missing that violent streak that's sort of his calling card. We're seeing a newer, softer side with baby Hope, and yes that has been sweet. (What kind of monster doesn't love seeing a hot guy hold a tiny baby?) But I'm woman enough to admit that I miss Klaus' kill first ask questions later mentality. It adds a level of drama and unpredictability to him that has been missing of late. What can I say? I like a bad boy, I can't be the only one. It looks like it's going to be a good time for evil-Klaus lovers everywhere since it seems like this nonviolent phase is about to end. The first sign came when Joseph Morgan tweeted, "We're back on tonight. And as I'm also filming tonight, Klaus will be causing bloody mayhem in two places at once. A new personal best ;)."

Alright! Less sensitivity, more stakes and heart-ripping please. This is sounding good so far. Then in an interview with People Magazine, Morgan dropped some juicy The Originals spoilers, including a choice quote that focus on Klaus' darker side:

More and more, he's being separated from the family, and that's when he's likely to do something crazy and irrational. That Tweet, especially, was in response to reading the last couple of episodes. Especially the penultimate episode of the season, where he does a series of terrible, terrible things. And it's extremely violent. There's a lot more of that side of Klaus toward the end of this season, the villainous side – the dark side.

Crazy and irrational? Now that sounds more like the Klaus we know and love. The only real downside of Klaus getting back to his murdering roots is that it will put everyone — witches, vampires and werewolves alike in danger. Seriously, no one escapes unscathed when Klaus loses his temper. Wondering what could possibly happen to trigger this sudden blood bath after months of (relative) peace in New Orleans? I've rallied up the most likely causes of what will set him off.

I think we can all agree that Rebekah is Klaus' favorite sibling. She's got her hands full right now, locked in an internal battle to quell Eva's evil spirit and take over her body for good. If she loses that battle and is absorbed (or however you qualify getting your essence squished) Klaus would very likely lose his temper and tear the city apart trying to find a way to save his sister.

Mikael Returns With A Vengeance

Things never get bloodier than when Klaus and his (sort of) father go up against each other. Now that Freya has revived him from Finn's spell there is no telling the kind of trouble they will cause together. With any luck they leave Esther out of it, because that would be seriously bad news for everyone.

This seems like the most likely candidate to me. We already can tell that Hope has some major-witchy super powers that will attract the wrong kind of attention. Even with the wolf pack protecting her, she's in an awful lot of danger if the wrong people catch the wind of her abilities. If the witches did take Hope, it would be a massacre we haven't seen since Marcel ran the quarter.

More like this
These 'Bachelor' Spoilers Suggest Christina Mandrell Is The New Villain
By Grace Wehniainen
Netflix Shut Down 'Bridgerton' S3 Rumours About A “Very Dark” Storyline
By Bustle
Bill & Frank’s 'The Last Of Us' Episode Has Twitter Emotionally Wrecked
By Alyssa Lapid
'The Last Of Us' Has Officially Been Renewed For Season 2
By Darshita Goyal
Get Even More From Bustle — Sign Up For The Newsletter
From hair trends to relationship advice, our daily newsletter has everything you need to sound like a person who’s on TikTok, even if you aren’t.