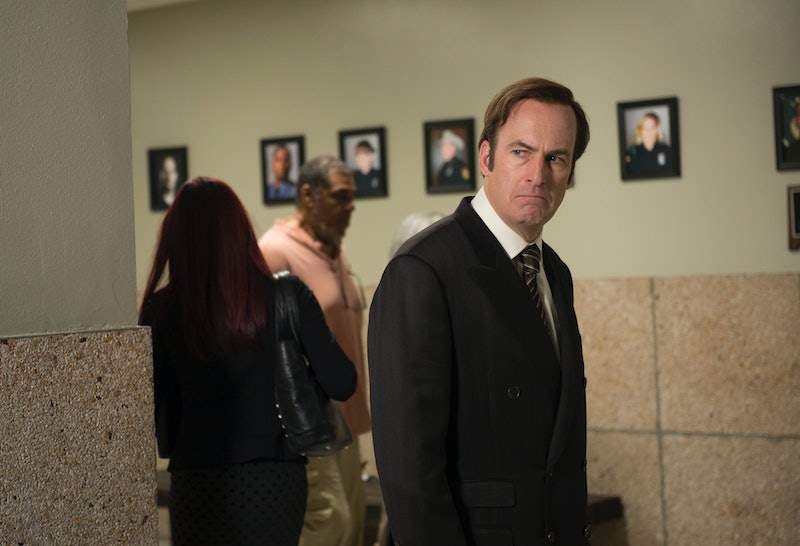 Considering we know how this story ends, the stakes have been pretty high for Better Call Saul. Thankfully, though, the freshman Breaking Bad prequel has lived up to its hype in more ways than one. We've not only gotten a peek at Saul Goodman before he takes up the name Saul Goodman, but the Albuquerque world we already know and love has been expanded ten-fold. That's a good thing. But let's say you somehow managed to miss this entire season so far — and seriously, what's more important than Saul Goodman's origin story? For those late to the party, here are some of the things you missed, including Breaking Bad Easter Eggs on Better Call Saul.

Right off the bat, we need to stop calling him Saul Goodman. We don't have Saul yet — we've got Jimmy McGill, and he's a struggling lawyer trying to scrape by. One day, Jimmy will grow up to be the fast-talking, smooth criminal lawyer who uses any means — and I do mean any — to get his seedy clients off the hook. In trouble? You better call Saul, because he's your best bet.

If you really did skip this entire season and are looking to jump on board now — or have simply forgotten everything that's happened — here are just a few highlights of what you missed on our first return trip to Albuquerque.

So Many Breaking Bad Easter Eggs

The Return Of Tuco

How about instead of a simple Easter egg, we get a Breaking Bad baddie? Since Better Call Saul is a prequel, Tuco isn't dead yet. That turns out to be a terrifying thing for Jimmy, as he comes face to face with him and accidentally gets roped into his business — which is of course illegal.

As much as I loved the first season of Better Call Saul, it moved a little bit slow for my liking. No, I never wanted to jump right back into the drug cartels of Albuquerque, but we've only got a small glimpse of them so far. If that's even what they're actually up to. They're doing something, but what? Let's hope we find out for real during Season 2.

Chuck And His Space Blanket

Turns out Jimmy's got a brother who happens to be "allergic" to electricity. Allergic has to go in quotations because everyone thinks — and with good reason — that Chuck is a little bit crazy. He's removed every trace electricity from his house and barely leave the house. When he does, he wraps himself in a space blanket.

In the future, we know that Jimmy will do anything for his clients — or at least anything that will give him a huge payout in the end. In what is is his first attempt at this "whatever it takes" strategy, he buys a billboard, then has the billboard taken down, and the billboard worker handing this task "trips" and "falls" and "Jimmy has to save him." It's all staged, don't worry. And a huge effort on Jimmy's part to basically get work, because now everyone thinks he's going to basically risk his life for them.

Jimmy decides that the best law for him is elder law, and starts hanging out at a retirement home. He runs the bingo games there, and he also practically sponsors the bingo games, too. He's got bingo cards and and drink cups made up with his face all over them, and if AMC wanted to make some cold hard cash, they'd sell those in their online store.

The Best Of ABQ Dumpster Diving

Sure, on Breaking Bad Walt used chemicals to decompose bodies and that was pretty gross, but Jimmy went dumpster diving trying to obtain some records (semi-legal, right?) and it was pretty gross too. But it was actually a great scene, since he also took a phone call in between digging through the trash and uttered a great catchphrase: "blow my magic flute." This might have played like an over-the-top comedic scene, but really, it showed us exactly what lengths Jimmy will go to for a case. Dumpster diving is only the beginning.