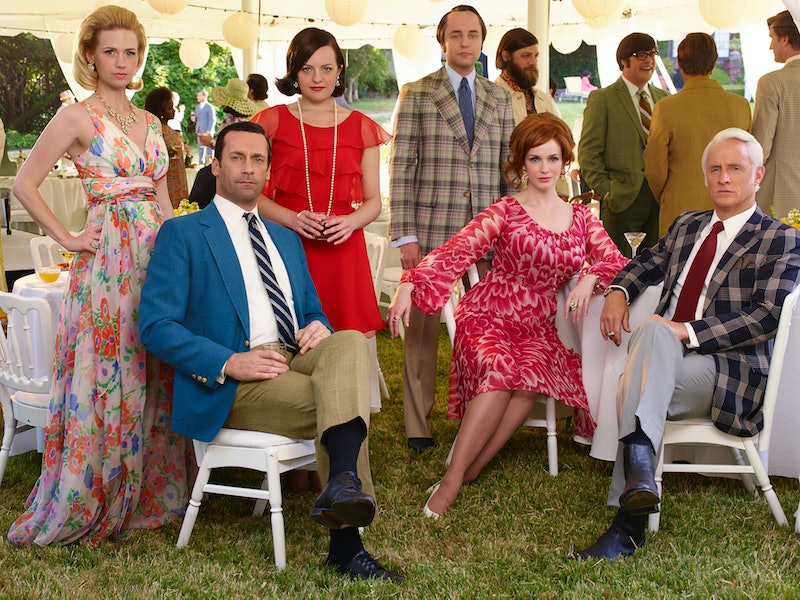 Mad Men loves to be incredibly cryptic with its exact time and date. For the last six and a half seasons, the show has been nestled nicely in the 1960s, with the decade basically playing a character itself. From the music, to the fashion, to the world events, it was a great decade to set the story of Don Draper and his American Dream. But with the start of Season 7B I have to wonder what year Mad Men has landed in: And if the mustaches are any indication, Mad Men Could be in the 1970s. From the looks of it, a TON of things have changed since the last time we saw Don and the gang. Mad Men might have just made a huge time jump. Update: Mad Men Season 7B is firmly in 1970 which we know thanks to a Nixon speech about Vietnam.While Don is laying in bed towards the end of the episode, Richard Nixon delivers this part of a speech, which he famous gave in 1970:

Ten days ago, in my report to the Nation on Vietnam, I announced a decision to withdraw an additional 150,000 Americans from Vietnam over the next year. I said then that I was making that decision despite our concern over increased enemy activity in Laos, in Cambodia, and in South Vietnam.

Earlier: So far, the show hasn't dropped any major world event clues as to when exactly everything is taking place. All we know for certain is that it's after July 1969 — that's when Mad Men's Season 7A finale, "Waterloo" happened. That episode coincided with the moon landing that year, so we're definitely out of the summer of '69. Plus, the Mad Men Season 7B trailer featured a song recorded in 1976, which doesn't give us an exact date, but does suggest a much later time frame for the series' finale bow.

The fashion has changed a lot, another little clue that we might be in a new decade. Many of the promotional images released for this 7B season has Megan Draper rocking some bell bottoms — and those really didn't start becoming a big fashion trend until the '70s, with the start of disco. All the colors seem to be a lot brighter, and the skirts even shorter, too. If that's not enough, hair is longer on everyone from Peggy to Ken, so clearly time has passed. And probably more time than just a few months to put us at the end of 1969.

Also, there's the amazing 'stache that Roger is rocking. That most certainly did not happen overnight. And however it happened, let's all agree that we're thankful for this new Mad Men era, where Roger has a mustache. Ted has a mustache, too. But Roger's is better.

Without the date being officially confirmed, all we can do is speculate as to this little time jump. Mad Men won't leave us hanging date-less forever, so in the mean time, seriously, Roger's mustache. Amazing.

More like this
Kate Winslet To Star In Russell T Davies' 'Dark Season' Revival
By Sam Ramsden
The First Trailer For 'That '90s Show' Includes So Many Nods To The Original Series
By Jack Irvin, Alyssa Lapid and Grace Wehniainen
'Bel-Air' Season 2 Finally Has A Release Date & A New Trailer
By Brad Witter, Kadin Burnett and Sam Ramsden
'Gilmore Girls’ Lauren Graham Just Revived Our Hopes For A New Reunion
By El Hunt
Get Even More From Bustle — Sign Up For The Newsletter