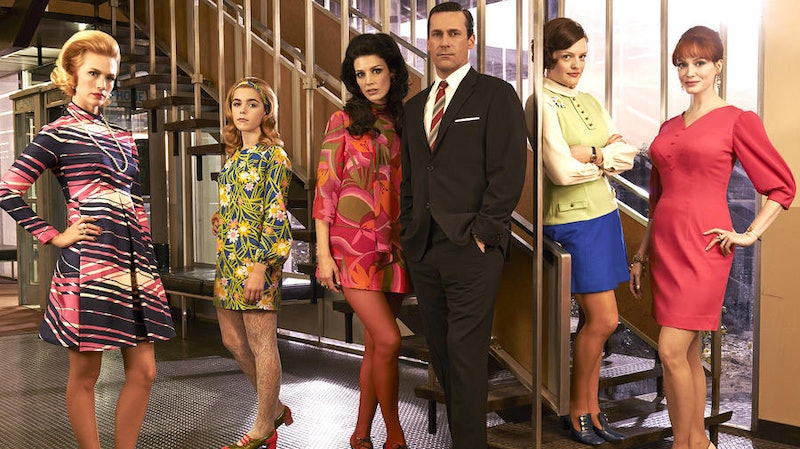 Just when I'm finally getting over the trauma of Breaking Bad ending, I have to relive the hurt all over again with the end of Mad Men. The much-anticipated second portion of Season 7 will debut on April 5 and, hopefully, begin to lead us towards a resolution. As fans know, Mad Men creator and showrunner Matthew Weiner is notorious for doing the unexpected and it's hard to predict how Mad Men will conclude the show in the final episodes. So far, Weiner has mostly kept his lips sealed in regards to any Mad Men Season 7 part 2 spoilers, but the few hints he has given about the series finale have geared fans up for the final few episodes.

Weiner isn't one to worry about our feelings too much. Mad Men is already pretty dark and I would have to imagine that the last episodes of Mad Men will not be too kind to us. There is even rampant speculation about who will die (because on Mad Men, the question is not "will someone die?" but "who will die and when?").

Surely the bad, though, will also come with some good. More than anything, I am just hoping Mad Men answers some of our burning questions like who will succeed, and who will perish? Will Betty ever be happy? Will Sally recover from her traumatic upbringing? Will Megan stop being annoying? We don't know yet... but we will very soon. Though there is still so much to speculate on, here are a few things we can likely expect from the final episodes of Mad Men.

1. The End Will Be Shocking

As John Slattery (Roger Sterling) said of the finale, according to the iDigitalTimes: "It was surprising to the end... It's been surprising the whole time." Prepare to be shocked (and probably devastated) by the conclusion of Mad Men.

2. The Final Episodes Will Focus on the Six Main Characters

Weiner has confirmed that the second portion of Season 7 — which will consist of 7 episodes — will be focusing on the six original characters: Don, Betty, Peggy, Peter, Joan, and Roger. So, perhaps Mad Men will go the Arrested Development Season 4 route and focus each episode on one of the main characters (with minor characters popping in and out of each episode) before presenting one final wrap-up episode for the finale? Weiner did say that in the "last seven episode, I would say each one of them feel like the finale of the show." Looks like we can finally look forward to some much needed closure.

Betty has never been softspoken but she has often put much stock in how a 'lady' should act. This could be going out the window with Betty's feminist side potentially making a debut. According to The Hollywood Reporter, Matthew Weiner hinted at Betty being more self-aware this season, stating:

You'll have to see what happens with her. I can't speak to what the audience thinks, I can only speak to what we're trying to do, but I think Betty has grown a lot. We see her behave the way she behaves — but that conversation with her and Henry where she disagrees with him in public, that's not about Betty being obnoxious. That's about the fact that a woman was not allowed to publicly disagree with her husband. And that's gratefully a relic of the past, though I know it still functions in many relationships. But I feel like Betty reached a frustration point that's almost political to me. She's tired of being told to shut up. That's gross, if you look at the woman who said to Helen Bishop, "I don't know who we're voting for."

Last season gave us hints of a change in Betty, especially during the scene in which she goes against social norms to question her husband Henry in public (a big no-no at this point in history). It is rumored (and I hope it's true) that Betty will become a vocal feminist activist as the series comes to an end.

4. There Will Be a Surprising Blind Date

Who will it be?! Will Peggy finally find love (hopefully with Ted)? Will Joan find a husband who isn't a total jerk? What does a 'surprising' blind date entail?

5. There Will Be Hosiery

According to a report by TVLine, one of this season's big products will be an iconic hosiery product. I know, I know — this is such a juicy tidbit, your mind has probably been blown by this one. But in a world where Matthew Weiner gives us almost nothing to go off of going into the mid-season premiere, we'll take what we can get.

6. Three Series Regulars Will Be Absent

TVLine also confirmed that three series regulars will be notably absent. WHO WILL IT BE?! (Please be Jim Cutler, please be Jim Cutler...) Seriously though, it better not be anyone crucial. Freddy Rumsen, I could probably do without — but I don't even want to speculate any further than that. (That said, I encourage you to cross your fingers with me that one of them is Jim Cutler... sorry, Lisa Rinna).

Following their juicy hosiery tidbit, TVLine also confirmed that Elizabeth Reaser (aka Jane Doe who gets a new face from Grey's Anatomy/aka Robert Pattinson's Twilight mom) will have quite an interesting role. Soooo, is she like, another secret wife of Don's? Sally Draper's weed dealer? Roger Sterling's LSD/MDMA/cocaine/weed dealer?

8. There Will Be an Ominous Spilled Glass of Wine

Apparently, there will be a randomly spilled glass of wine "that is sure to launch 1,000 think pieces on 'Who will die?'" Yikes.

9. Ginsberg's Mental Illness Will Be Addressed

Poor, poor Ginsberg. This guy has had such a tough life and it doesn't look like things will get much better for him. Weiner confirmed the suspicions of many when he referred to Ginsberg as a "delusional schizophrenic." Weiner told The Hollywood Reporter:

"I don't know how much we know about [Ginsberg's schizophrenia], but there are triggers, and anyone who has been paying attention to the story can see that he's been wrestling with that. It also does appear sometimes in people who express creative abilities. His delusion is a disease, and it gets tied up into everything that is outside him."

Mad Men is notorious for using the past to shed light on the present and a storyline addressing Ginsberg's mental illness would be a sad (but very much-needed) look at how poorly mental illnesses have been dealt with in the past while shedding light on how far we still have to go in de-stigmatizing mental illness.

10. Conspiracy Theories Will Be Debunked

Speculation has been swirling about how the show will end (and who will meet their demise along the way). Weiner has already begun debunking rumors and popular conspiracy theories that have been floating around the internet. For example, one theory was that Megan Draper would be killed in the Manson murders but Weiner has already thwarted that one, citing that he wouldn't recreate history to add a fictional victim. Additionally, the rumor that Don Draper dies this season, which has been a major theory (based on the opening credit sequence, as well as on Don's musical hallucination, which some suggest is the result of a brain tumor), is still at large and I only hope it won't come true.

More like this
'Succession' Season 4 Will Be An "Absolute Banger" According To Cousin Greg
By Bustle Staff
This ‘Bachelor’ Spoiler Teases The Dramatic Self-Elimination Of A Fan Favorite
By Grace Wehniainen
Season 2 Of 'Yellowjackets' Is Coming Sooner Than You'd Think
By Gretchen Smail and Grace Wehniainen
'Ted Lasso' Season 3 Might Be Its Last
By Zosha Millman and Grace Wehniainen
Get Even More From Bustle — Sign Up For The Newsletter
From hair trends to relationship advice, our daily newsletter has everything you need to sound like a person who’s on TikTok, even if you aren’t.