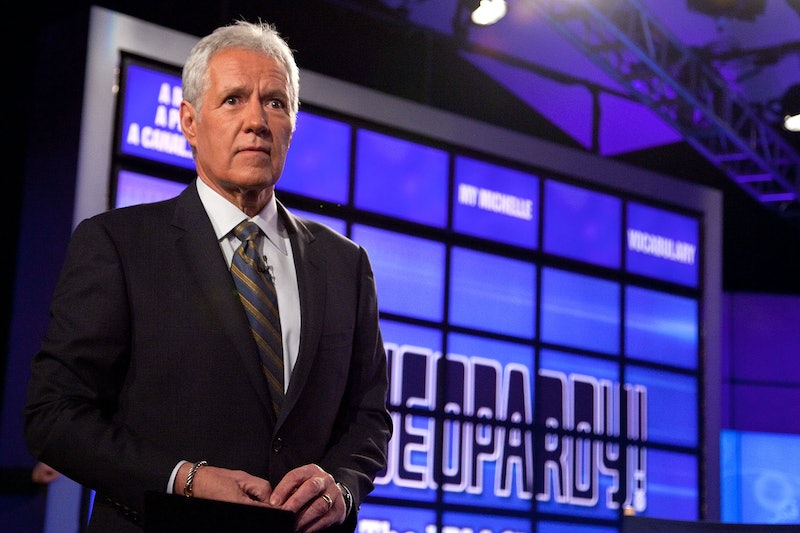 Can I just start out by saying I have mad respect for people who go on Jeopardy. I've spent a good part of my life trying to figure out how to be a contestant on Jeopardy , but I cannot fit enough facts in my brain to remember what I ate a half an hour ago, let alone half the history of the universe. I have often joined my roommate in the traditional nightly viewing of the show, and even in the past few weeks, I can only marvel at the people who take on that kind of pressure with such calmness and grace. Well, most people, that is. I'm honestly not sure how this man who had the biggest Jeopardy answer fail of all time managed to get on the show, let alone function in the adult human world.

OK, OK, I'm being a little unfair to this guy. I imagine being on that show is not exactly easy: The pressure's on, you're in the moment, and you're not necessarily thinking it all the way through before you buzz in and shove your foot so far down your throat it comes out of somebody else's esophagus. Plus, there's a ton of money at stake, so I'm guessing all those dollar bill signs in your eyeballs occasionally get the best of your common sense. But host Alex Trebek posed this question on a show the other night, a seemingly innocent question that doesn't leave all that much room for debate:

The answer is clearly "puberty," if you've read the question all the way through, but that's not the answer this poor guy gave.

Cue the cringe that was CRINGED AROUND THE WORLD. Here's the full video:

To be fair, these questions move at lightning speed. Trying reading the first half of the question, and ignoring the second half so you can hit your imaginary button. BOOM, would-be child sex offender, plus you just lost a bunch of money. My heart goes out to you, awkward man. Kind of.

The only comfort he can take from this debacle is, at the very least, he's far from alone. Here are some other contestants that maybe just should have not:

1. This awkward moment when they were down to literally one contestant for final Jeopardy

I basically watched this as it happened, which was a few weeks ago, and it only gets more awkward the more you watch it.

2. That time a contestant said "I'll take your momma" on-air

Literally, though, this was everybody's fault but hers.

3. That time all three contestants lost in a blaze of awkward glory

In the words of Katy Perry, "That was such an epic fail."

4. This contestant who did a Sean Connery impression

To be fair, it was during the height of the Saturday Night Live gag where Sean Connery was a frequent contestant. But to be even fairer, this impression was The Worst.

5. This contestant who had a much more ~exciting~ answer to a question that should have been "love triangle"

Honestly jealous that I am not this woman.

6. This contestant whose smug storm caves in on her all too quickly

7. The time one contestant piggy-backed another one's losses for infinite rounds

STEW IN THE AWKWARD. BASK IN IT. TAKE IT OUT TO DINNER.

8. The time this teenager dropped an F-bomb

Natalie Portman would be so f*cking proud.

9. The time Alex Trebek shot himself in the foot by revealing the answer

But just like quick note here so I can SHAME EVERYONE ON THIS SHOW for not knowing Aragorn's proper name in Lord of the Rings. It's almost like they had lives in the early millennium.