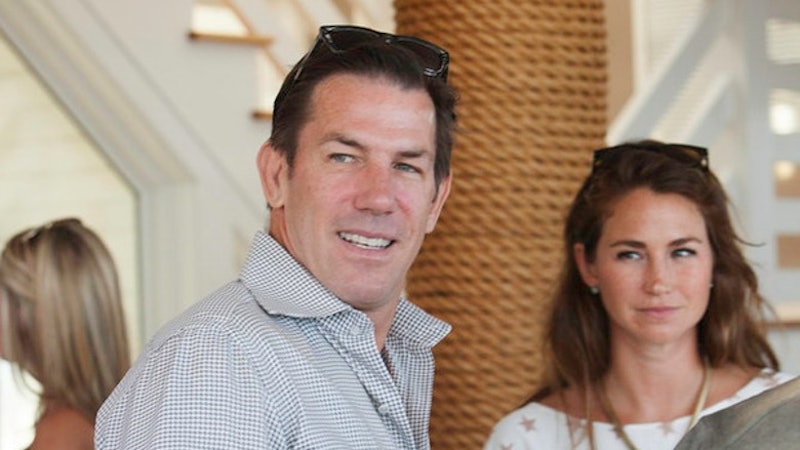 When the women and men of Bravo's Southern Charm gathered for a Thomas Ravenel "special announcement," everyone thought that the time had come when Thomas was going to propose to Kathryn. Much to my dismay — and definitely Kathryn's — Thomas didn't propose, but instead announced his run for U.S. Senate. And boy, did that announcement turn out to be lucrative for the Southern Charm fans, because we were gifted with some great ads for the Thomas Ravenel Senate campaign. One of the stand-out spots (seen on March 30 episode of Southern Charm) was the Thomas Ravenel for Senate "Raise the Roof" ad. But for some reason, that ad isn't apart of Thomas' collection for his campaign, so what happened?

The video in question — directed by fellow Southern Charm-er Whitney Sudler-Smith — featured a "chill" Thomas, at a low-key party (when I say "low-key party," I mean there were approximately four people and an in-house DJ present) dancing and "raising the roof" in the most awkward way ever. If you haven't seen the commercial, you might think I'm being a tough critic, but I'm actually being quite generous. The commercial, as a whole, was almost as ill-conceived as any home movie I could have created from the ages of five to twelve. But I digress.

The collection of ads that Thomas released to the public during his campaign doesn't include this incredible masterpiece of advertisement, and neither Thomas or Whitney have mentioned anything regarding why the commercial never aired. My guess? The other ads that Thomas and Whitney produced were probably deemed more professional, less cheesy, or — simply put — better (which says a lot, considering the quality of Thomas' other ads).

But there are probably a few reasons this thing was buried, and I've got a few ideas...

Because The Sunglasses Were Deemed Too Transparent

Too big, too transparent, and the only reason he has them on is to pull them down his nose to check out the three women dancing by the DJ "booth." Creepy.

The DJ Raised The Roof Incorrectly

Lesson for all: Don't hire a DJ who doesn't know how to properly raise the roof because you're going to find yourself losing a Senate race quicker than you can even say, well, "raise the roof."

Oh, that's right. Raising this so-called roof was a thing almost two decades ago, if not earlier than that (if the New York Times figured it out in 1997, it had to have been around before that). Maybe T-Rav finally realized he was years late to the party.

T-Rav Went With The Wrong Tie

Whitney warned Thomas that his tie was too "elitist," and maybe post-filming Thomas realized he wasn't a "man of the people" in his Hermes tie.

Whitney Didn't Want His Name Attached To It

Does this look like the face of someone who is proud of an ad that suggests a candidate in a 2014 political race should "raise the roof"? I didn't think so.