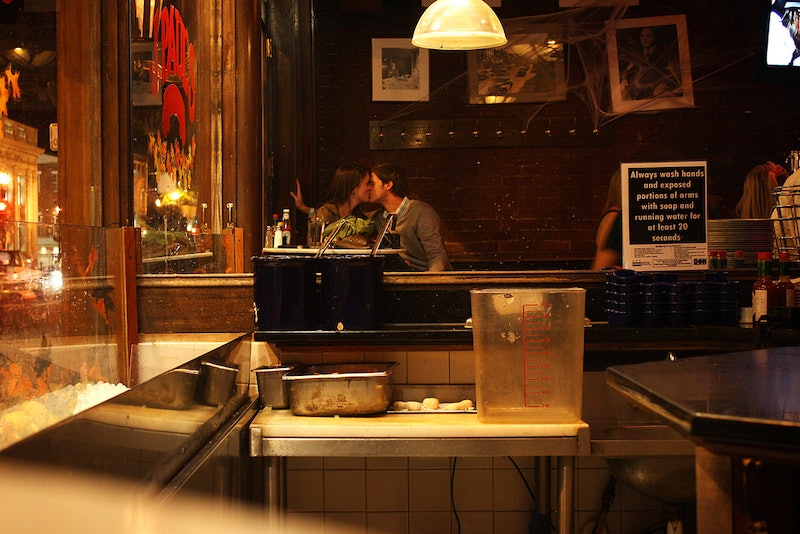 The only thing more nerve-wracking than going on a first date is figuring out where to go for said date in the first place. But hey, good news: If you've been wondering what the best first date places are, online dating app Clover has some answers for you. Clover analyzed data from 200,000 of its users to find out where people like to go on their first dates. Somewhat surprisingly, the results show that Americans are creatures of habit: Chain coffee shops, fast casual spots, and restaurants abound. Starbucks is almost guaranteed to be a solid choice by the way; it's not only the most popular first date spot of all, but moreover, it scored big with all three ages groups surveyed (18 to 24, 25 to 34, and 35-plus). Why not take the opportunity to impress your date with your sneaky ability to order a Birthday Cake Frappuccino, even though it technically no longer exists?

“We were surprised to see most people choosing to meet at coffee shops and casual restaurants for their first dates,” said Clover CEO Isaac Raichyk in a press release. “We expected fine dining, bars, and nightclubs to rank much higher, but clearly people want to meet in a relaxed environment,” he continued — but you know what? I'm actually not surprised at all. First off, we're all so busy these days that we don't always have the time to devote to fine dining restaurants or epic nightclub evenings, especially for a first date (what if it's a dud? That's a lot of time lost). And second off? First dates are stressful enough as it is without having to worry about whether you're using the right fork for your appetizer on top of it all. Meeting at a casual spot takes some of the pressure off — and that can only be a good thing as far as I can see.

Not if you go to Buffalo Wild Wings, Dean. Just do that and you'll be fine.

Interestingly, no one really thinks bars are terrific places for first dates: Only 13 percent of women and 18 percent of men listed a booze hall as their ideal location. So what do people like? Restaurants and coffee shops, although not necessarily in that order. 51 percent of men prefer restaurants, while only 31 percent prefer coffee shops; for women, though, it's pretty much reversed — that is, 52 percent of women prefer coffee shops and 35 percent prefer restaurants. Not going to lie, though — I'm actually more interested in the reasons behind these preferences than the preferences themselves.

Now, obviously sweeping generalizations often aren't super useful — one person's preference for coffee shops may exist for a totally different reason than the next person's —but the trend is still kind of interesting to note. My working theory is that dudes might want to impress their dates, and thus opt for the bigger restaurant experience; women, meanwhile, might like to keep things low pressure with a cup of coffee, rather than investing in a full meal (it's easier to end a coffee date early than it is to cut off a restaurant date — and hey, you can always hit up the restaurant after the coffee if all is going well). That's how I operate, at least; again, though, one person's opinion does not represent an group's, so do with that theory what you will.

Check out the full infographic below for the complete list of the 30 best first date locations around — and if you're playing the scene yourself, don't forget to check out Clover. They recently launched that On-Demand Dating feature we heard about a few months ago, which makes meeting new people and finding a fun activity for the evening easier than ever.