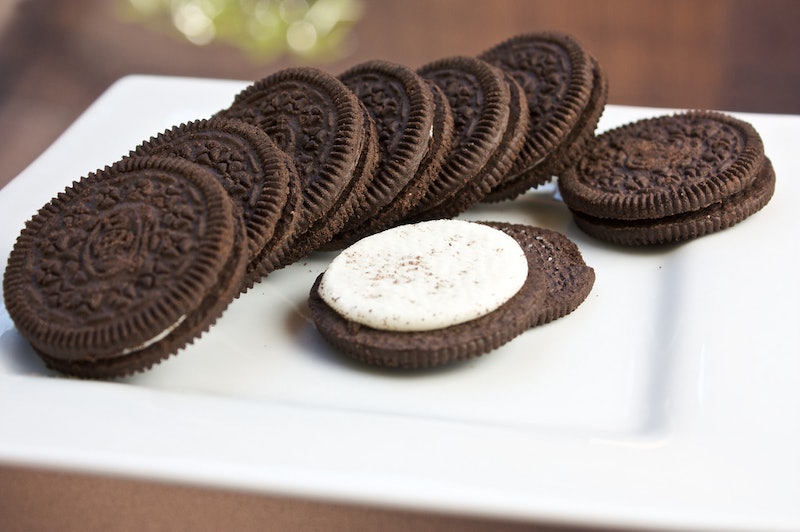 Oreo's latest creation may have been a long time coming — we first heard about Cotton Candy Oreos a month ago — but now that they're here, I'm pretty sure everyone else's thoughts on the matter have boiled down to the exact same thing: What do Cotton Candy Oreos taste like? We know what they look like (vanilla cookies with pink and blue cream); we know where to get them (they're a Target exclusive); but what's the actual gustatory experience of consuming them? Inquiring minds want to know!

Sadly, I have not yet been able to procure a package of them myself. As is the case with my nearest Starbucks, my nearest Target is several towns away (that's what I get for moving to the suburbs) — so alas, I'll likely be unable to make it there until next weekend. Incidentally, the Starbucks is actually in the Target; maybe the next time I go, I just need to double down on Target and Starbucks exclusives. Then I can tell you what those Evolution Fresh Smoothie things taste like, too.

Anyway, that's a very long way of saying this: I haven't tried them yet myself, so I've done a little digging and tried to find out what the people on the Internet who have tried them think.

Another of Mashable taste testers, however, was a little less charitable and literally said, “They taste like corn syrup.” I don't believe I've ever consumed straight corn syrup, but I would imagine that description translates to “so sweet I almost don't know what to do with it.”

(Also, yes, I know that's maple syrup in that GIF there — but given that the bottle looks like the sort "breakfast syrup" comes in, and "breakfast syrup" is mostly corn syrup... well, just let me have this, OK?).

According to YouTuber The Endorsement, Nabisco did manage to capture the taste of cotton candy — but, he notes, “What is cotton candy? Sugar!” He also thinks the cookie kind of masks the cotton candy taste, so that might just be something to bear in mind. He's also not the only one to have answered “sugar,” by the way; one of Mashable's other reviewers actually said they tasted like “pure, unadulterated sugar.”

My sense is that if you don't have a sweet tooth, you're probably not going to like these. If you do, though? Go forth! They're a Target exclusive, so don't try looking for them at your local grocery store — you've got to head to the big red bull's eye instead. Think of it like an Oreo homing beacon. Happy cookie-ing!