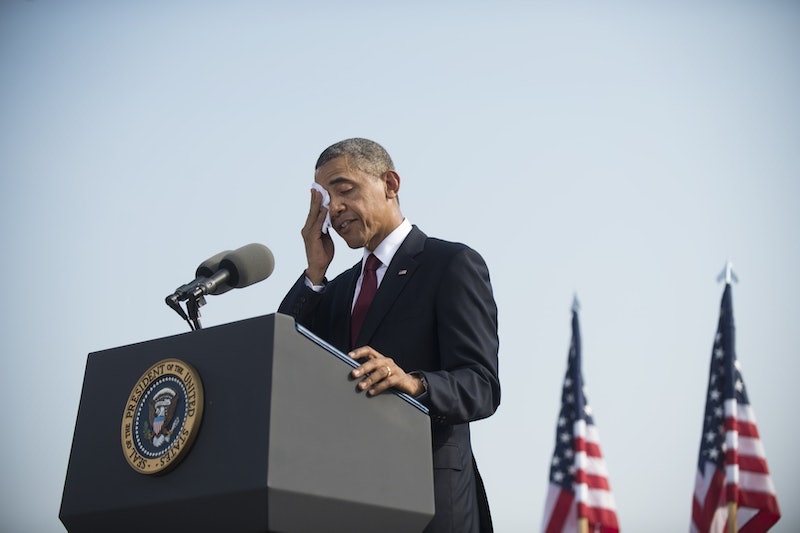 President Barack Obama's health secretary Kathleen Sebelius, currently under fire for Healthcare.gov's embarrassing failure, broke her silence Wednesday to note that Obama hadn't known about the problems with the website. Healthcare.gov, which functions (barely) as a health insurance marketplace, didn't really work on the day of the launch, something that apparently wasn't a surprise to many in Washington since the site had failed a "test drive" with a few hundred users days before. But Obama has been insistent that the website's failure was as much a surprise for him as for anyone else.

The Health And Human Services Secretary told CNN's Sanjay Gupta: "No one could be more frustrated than I am, and the President." (No one, we're sure, but the millions of Americans who were trying to get themselves insured.) Sebelius shifted the blame to the contractors responsible for coding the website, and declared her intent to move forward with the issue: "We want new eyes and ears. We want to make sure that we get all the questions on the table, that we get all the answers and accelerate the fix as quickly as possible."

Fox News reports that House Budget Committee chairman Paul Ryan began pressing Sebelius about the website long before the Oct. 1 launch. According to the Fox report, Ryan asked for, among other things, an organizational chart detailing preparations for the implementation efforts.

"Your continued silence on these important inquiries after refusing to testify raises serious questions about the administration’s commitment to transparency and accountability," Ryan wrote to Sebelius. (Her office apparently did not provide him with the requested information.) And though Ryan has his issues — cough, the conscience clause he's trying to push through, cough — the man's got a point.

But there's something off about Sebelius' claim. Everyone knows Obama is a micromanager: After all, this is the same man who personally approves everyone on his Kill List (a good thing, to be sure). On economic policy, too, Obama reportedly "dives into the minutiae." At top-level meetings, Obama reportedly "chafes at his advisers' limitations, quizzing them on points raised by critics or asking them to do justice to a view other than their own. At times he quotes from letters sent to the White House to counter a stance taken by his team."

So it's bizarre to think that, on this, his signature domestic achievement, Obama would hand over the reigns to someone else. And even if his underlings did willful withhold important information to shield him from the coming blowback, it's near-unfathomable that he wouldn't ask someone: "How's the healthcare.gov website doing? You know, that thing that's supposed to make purchasing insurance super easy for Americans? That thing we've been touting for months?"

More like this
Matt Hancock Broke a Major Rule With I’m A Celeb
By El Hunt
What To Know About Martin Bashir After Watching 'The Crown'
By Bustle UK
Michelle Obama Opened Up About The "Discord And Discomfort" Of Marriage
By Stephanie Topacio Long
'Waterloo Road' Is Back, With More Than A Few Familiar Faces
By Sam Ramsden and Vivian Iroanya
Get Even More From Bustle — Sign Up For The Newsletter