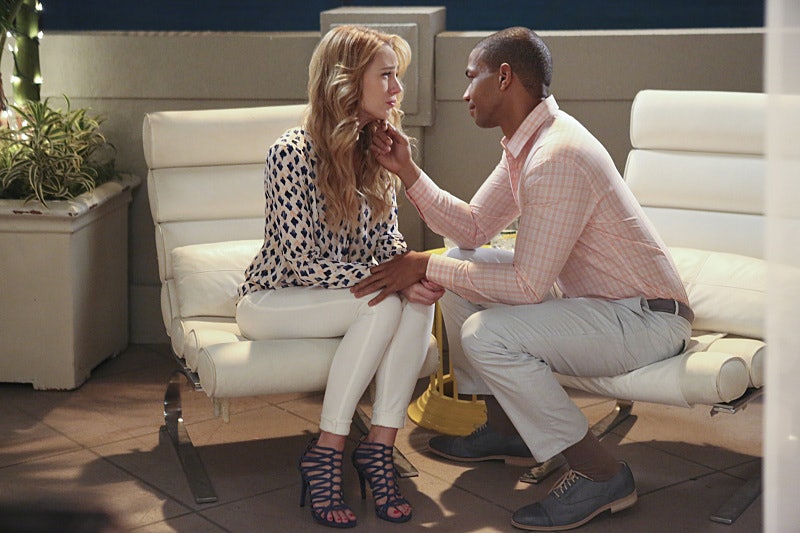 With the bromance of Michael and Rogelio developing, Rafael showing his jealous side (again), Xo saying the L word to Rogelio, and Jane diving into the wild world of motherhood, there was a lot going down in "Chapter 17" of Jane the Virgin. But the big reveal at the end of the episode was the twist fans have been waiting for — Petra discovered that Aaron is actually Roman on Jane the Virgin . Aha! I knew those Zazo brothers weren't to be trusted! Well, actually, I guess Roman Zazo is really the one not to be trusted since we have no idea what happened to poor Aaron. (Although I suspect he met his demise via a marlin ice sculpture unless there happens to be another Zazo brother look-alike running amok.)

Petra continued her bonding with "Aaron" in April 6's episode and things took a turn for the weird when she started to flirt with him. More specifically, she wanted to know if he was a strict practitioner of all things Jainism (his peaceful religion) and hinted at asking if he was celibate. (I told you things got weird.) "Aaron" picked up what Petra was throwing down and made sure she knew that he didn't following Jainism's rule on abstinence. (Ew much?)

I was concerned that Petra was actually getting sucked into falling for the identical twin brother of her dead lover when she kissed "Aaron" (and a shout-out to the Latin Lover's amazing narration at this point in the episode), but I was a fool to think that Petra was such a — well, fool. She had started to suspect that Aaron was actually Roman and used the kiss as a way to confirm it. When she apologized later for taking things too far with him, she also saw he had a birthmark/mole on his neck (a mark that Roman had) — sealing the deal that Roman is disguising himself as his twin brother.

Petra instantly went to her ex-husband Rafael with this information, which makes sense since he was Roman's best friend, but very much concerns me. Petra was already staring longingly at Rafael during the party they threw together at the Marbella (and Aaron-Roman didn't seem pleased about it). Petra and Rafael's working and personal relationships are getting all sorts of tangled and it wasn't that long ago that the couple was married.

With Rafael drunkenly snapping at Jane this episode (not cool!), Michael's hope that Jane will wake up one day and realize she should be with Michael — and not Rafael — doesn't seem too off base. And Petra seems like she'd definitely get back with Rafael — as long as Roman doesn't get in the way. And in my TV-viewing experience, people don't normally lie about their death and identity unless they are planning on stirring up some serious trouble. Plus, there's that tiny detail that Roman is connected to Sin Rostro's drug trade — so things are bound to get real scandalous indeed.