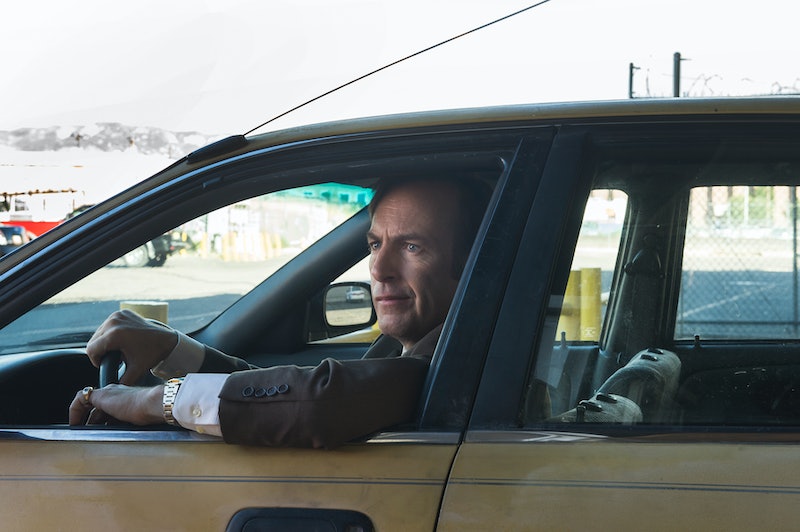 We've reached the end of the beginning, my friends. Monday night brought the first season finale of Better Call Saul. Sure, we already know how this Saul saga ends in the future, but for right now we're completely along for the ride, wherever it may take us. Better Call Saul latest and last episode, "Marco," brought us back to Jimmy's roots in Chicago, along with giving us a few great Breaking Bad Easter eggs.

If you're well versed in obscure Breaking Bad references, more than likely you were just waiting for Jimmy to say the magic "B" word during his bingo game. While calling out numbers and letters for the old folk, Jimmy starts using words to actually highlight the letter — he goes through brother, betrayal, and we're all kinda waiting for him to say, "Breaking Bad." Instead, Jimmy goes right for the gut: Belize.

Yeah, Jimmy went there. In Breaking Bad, Belize is the location where Mike "goes" after he dies. Saul suggests to Walter White that he send his brother, Hank, to Belize, too, for a visit (because the two guys are brainstorming how to get Hank out of the picture, since he's onto the whole Heisenberg thing). If you still need it painted out a little bit clearer, Belize = death.

Then, there's the Kevin Costner shoutout. We know that Saul's a master storyteller, and turns out Jimmy's a pretty good one, too. One day, in the future, after Saul has just met Skylar White for the first time, he mentions that he "once told a woman I was Kevin Costner, and it worked because I believed it." During "Marco," we meet the woman who fell for that line. His line to Jimmy the next morning is, "You're not Kevin Costner." Poor girl.

Ever wonder why Saul wears a ring on his pinky finger? That's a ring from his Chicago buddy, Marco. While he and Jimmy are out on a "job," Marco has a heart attack and dies. Jimmy's pretty beat up over it, and Marco's mother gives him one of her son's rings. Jimmy's not sure how he feels about the piece of jewelry at first, but as we know, we never see Saul without it.

Lastly, in the final moments of the episode, Mike takes a phone about doing new business with someone. I found myself chanting "GUS. GUS. GUS." out loud, but we never learn who's on the other end of the call. So, here's to Better Call Saul season two, and wishing, hoping, and praying that the guy on the phone is Gustavo Fring.

More like this
Dan Levy’s Father’s Day Pic Of Dad Eugene Spoofs The ‘Schitt’s Creek’ Vet’s Past
By Grace Wehniainen
“The Door Is Always Open” For Another 'Breaking Bad' Spin-Off, Says AMC Boss
By El Hunt
Kim Kardashian Father’s Day Tribute To Kanye West Called Him “The Best Dad”
By Stephanie Topacio Long
Prince William & His Kids Are Adorable In A Smiley New Photo For Father’s Day
By Stephanie Topacio Long
Get Even More From Bustle — Sign Up For The Newsletter