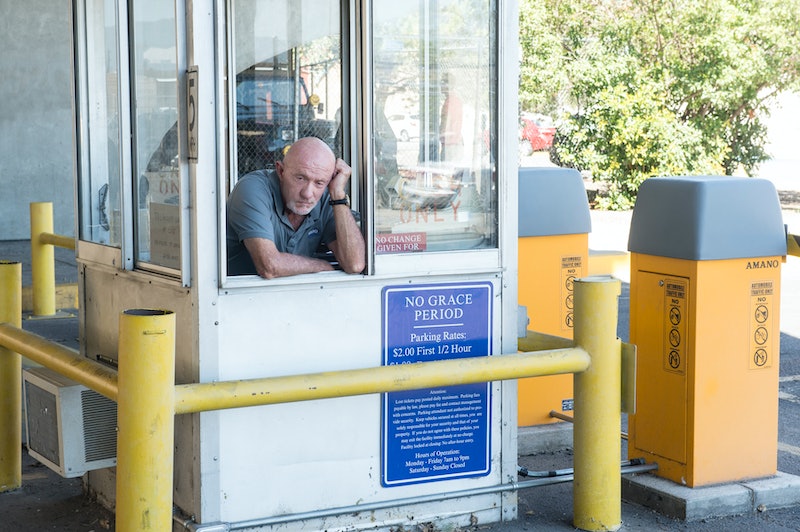 Tonight's episode of Better Call Saul , "Pimento" brought the Sandpiper case to HHM, and Jimmy was immediately screwed over by it. Know who wasn't screwed over by his job? Our boy Mike. Oh Mike. I don't think we've all collectively loved a muscle man as much as him, and we also kind of want him to be a grandfather figure to us at the same time, too. A little bit weird? Yeah, but it's the truth. Mike's also the honorary recipient of the Breaking Bad Easter Egg for this week's Better Call Saul , and the episode title says it all. It's all about cheese.

But fist off, Mike needs a job. Or, a "job." He's hooked up with the veterinarian in town, who seems to have a hand in all sorts of wrongdoing. This leads Mike to follow through one job lead, and that brings him to a vaguely familiar parking garage. Why does it look so familiar? Obviously we've been here before in the distance Breaking Bad future.

Remember that time Walter White was hell bent on taking out Gus Fring — before Gus took out him and Jesse Pinkman that is? Walt decides to plant a pipe bomb underneath Gus' car to detente, but the plan is quickly scrapped when Gus realizes what's going on and avoids getting blown up (for a little while, at least). This all goes down at a parking garage next to the hospital in town.

Now it's Mike who finds himself in this parking garage, waiting for a car to get into and head off to a "job." It might not be meant as the same exact location (no indication that they're anywhere near the hospital), but it's the same parking garage regardless.

That's not the only Breaking Bad shoutout during the episode. When Mike shows up for this job — and, OK, the "job" actually turns out to be hired muscle for some skittish guy who's selling drugs to Nacho — he's brought a bagged lunch with him. What's inside? Pimento cheese. Mike seems to swear by this cheese, and refers to it as, "the caviar of the South." This is clearly Mike's cheese of choice, because later on down the road, he'll talk to Jesse about it, too. Pimento cheese, how does that sound? Jesse could really care less about it, honestly. He doesn't know what kind of fine cheese he's missing out on. His loss.

Skip ahead to 2:17 to see the actual cheese discussion.

Basically, if you ever need to go on a "job," hope that Mike is there, too, because he'll more than likely have brought sandwiches.