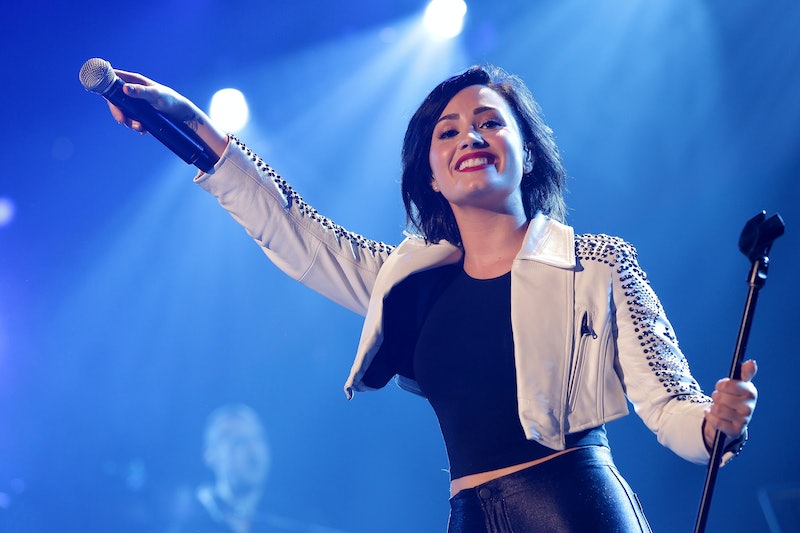 What's better than getting a new tattoo? Seeing how magical your tattoo artist can be in covering up an old one with a new and improved, less impulsive one, of course. More plainly, Demi Lovato masked an old tattoo she didn't seem to be too pleased with any longer. The singer posted a picture to her Instagram account of her brand spankin' new ink that starts at her wrist and ends mid-forearm. She cheekily captioned the photo, "Bye bye [lips emoji] and hello [rose emoji].. Thank you SO MUCH to my brother @GEESPOTAT2... It looks beaaauutiful and I LOVE it!! #RIPvaginatattoo #kidsdontdodrugs."

The new rose she's sporting is just below the word, "Stay," one of the many other tattoos Lovato has painted her body with. And when I say "many," I mean tons. According to Cosmopolitan, as of July 2014, Lovato had 26 tattoos. So, I suppose this one can count as number 27, even though it's technically a replacement.

And that "Stay" tattoo? Well, it's only half of a phrase she got inked on both of her wrists. Lovato told iHeartRadio the purpose of her ink and it's incredibly sweet. She explained,

I think the, the most meaningful one to me is "Stay Strong." It was one of my first few tattoos as well. When I got out of rehab that's the first thing that I did is I went and got tattooed "Stay Strong" because a lot of fans were telling me that and it helped me get through a rough period.

So, what are some Lovato's other tattoos? Let's take a look:

The Now-Covered Up Lips Tattoo

Hey, I didn't think this one was so bad, Demi.

Cosmo says, "Lovato had celebrity tattoo artist Kat Von D ink 12 birds on her arm, representing freedom and the 12 steps she completed as part of her post-rehab sober living program."

Probably one of her more recognizable tats.

Right behind her ear.

A Tattoo Of Africa

Lovato told iHeartRadio, "I got Africa tattooed. I went there for my 21st birthday. I went to Kenya and it was just a very, very inspirational journey that I feel like really had a huge impact on my life. And, I would've gotten Kenya but then people would have been like, 'What's that?' So Africa's a little more distinct."

Lyrics from her inspirational song, "Warrior."

"You Make Me Beautiful" With Feathers

Demi told iHeartRadio of this tattoo, "I was 16. And I got it in some tattoo artist's apartment. Like it was so sketch, it was in L.A. But I wanted to get tattooed so bad. I do things out of rebellion. So that was like one of the main reasons why I got it so young."