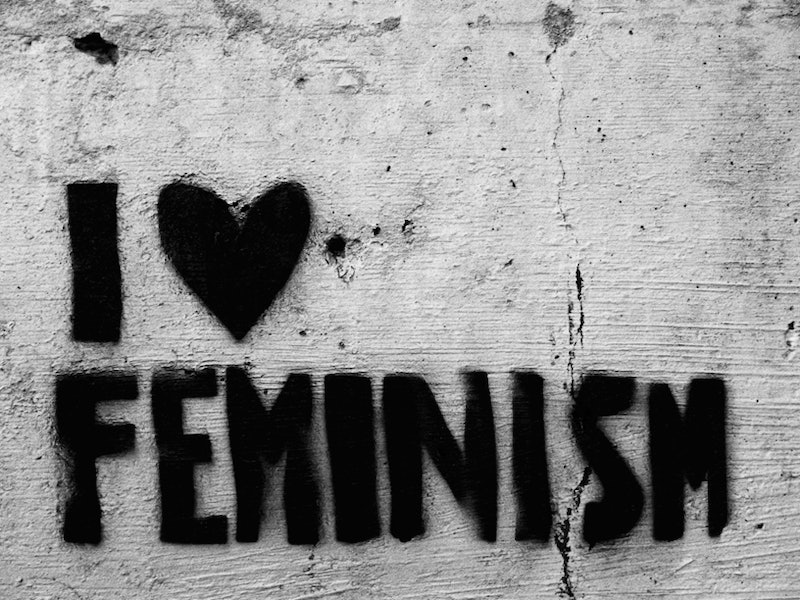 The word "feminist" gets a lot of bad publicity for no good reason. When asked by 2013 Huffington Post/YouGov poll, "Are you a feminist?" only a small number of people answered in the affirmative — 23 percent of women and 16 percent of men, to be exact. Yet 82 percent of both men and women in the same survey said they believed "men and women should be social, political, and economic equals," suggesting that the real problem is a misunderstanding about what the term means.

In fact, if you look at the dictionary, most definitions of feminism are nearly identical to the phrase in the survey question: Dictionary.com's is "the doctrine advocating social, political, and all other rights of women equal to those of men," and Merriam-Webster calls feminism "the belief that men and women should have equal rights and opportunities." The poll's phrasing also bears resemblance to a definition originating from the TED Talk "We Should All Be Feminists" by Nigerian author Chimamanda Ngozi Adichie and sampled in Beyonce's song "Flawless": "a belief in the social, political, and economic equality of the sexes." Under these definitions, 82 — not 20 — percent of Americans are actually feminists.

A new quiz on Pulptastic clears up the confusion over what feminism means by asking one simple question:

Let's all take a moment to note that the question was not "Are you a paranoid man-hater with a chip on her shoulder?" or "Do you dislike beer and bars and muscle cars?"

If you answer "yes" to the question actually asked — "Do you believe women and men should have the same political, economic, cultural, personal, and social rights?" — the quiz leads you to the result:

Assuming that most people who don't identify as feminists aren't sexist pigs — in fact, only eight percent of Americans consider themselves anti-feminists — there are a number of other reasons people may not choose to identify. Some may simply not have thought a lot about the issue, or some may think they have to be involved in some form of activism to qualify as feminists. For example, Jenna Marbles says "thank you for fighting for us" when she mentions feminists in one of her videos, but doesn't say anything to align herself with feminism, even though she's clearly not against the movement.Along with Beyonce's sampling in "Flawless", a number of celebrities are using their influence to help fans understand what feminism is and isn't. Last year, comedian Aziz Ansari announced on The Late Show with David Letterman that he is a feminist and urged the audience to do the same:

"If you believe that men and women have equal rights, if someone asks if you’re a feminist, you have to say yes because that is how words work, right? You can’t be like, ‘Oh yeah, I’m a doctor that primarily does diseases of the skin.’ Oh, so you’re a dermatologist? ‘Oh no, that’s way too aggressive of a word! No, no, not at all, not at all.’”

Hopefully, creative initiatives like Pulptastic's quiz and Ansari's jokes will encourage more people of all genders to identify as feminists — and in turn, the word will become destigmatized so that even more people feel comfortable identifying with it. Because all the patently false stereotypes about feminists are detracting from the causes we're actually fighting for. Images: Jay Morrison/Flickr; Pulptastic (3)