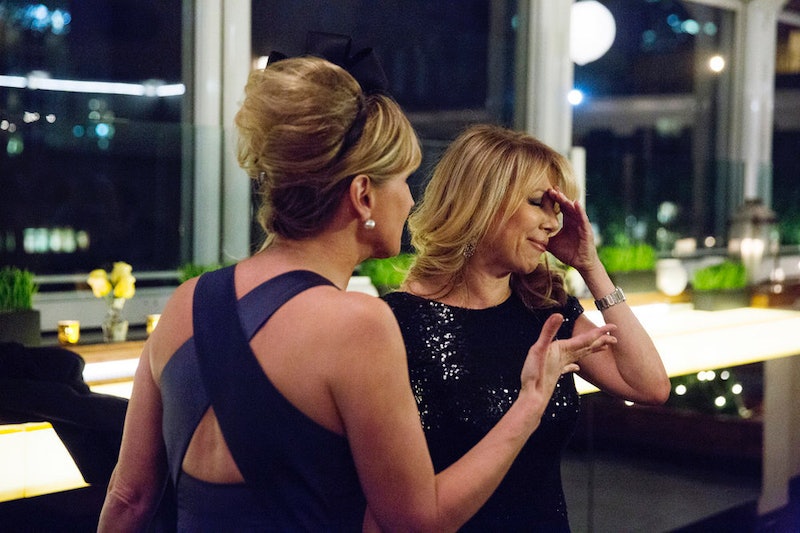 Oh boy. If you weren't ready to be back in the New York groove, the Season 7 premiere of The Real Housewives of New York City certainly flung right back into the thick of it. As you would expect, the Season 7 premiere caught us up with what these tough broads have been up to since the last time we saw them and that included what's going on with Ramona Singer's high-profile divorce from her husband of more than 20 years Mario, which she relayed to her bestie Sonja Morgan.

If you know anything about Ramona and Sonja, you know that they are basically attached at the hip, and most of the time annoyingly so. However, you would think that Ramona and Sonja's uber-closeness would never be more welcome than when Ramona needs some serious consoling.

And it was as Ramona, who we've seen as very reluctant to ever discuss any personal problems she may be having, opened up to Sonja about the status of her and Mario's relationship. At the time of filming, Ramona was not together with Mario, but she wasn't divorced from him yet either. Ramona said that Mario had wanted her to keep the details of his "indiscretion" quiet, but Ramona said she wasn't going to remain silent on the ordeal any longer. Now that's the Singer we know and love!

Unfortunately, my standing O for Ramona was short lived because of Sonja's completely inappropriate response to her revelation. Instead of comforting Ramona for finally speaking out about her devastating experience, Sonja started to talk about the hardships she had during her divorce. I know you were just trying to be helpful and relatable, Sonja, but this was not the time. But watching how self-centered these ladies could be during the previous six seasons, I can't say I was really surprised by Sonja's behavior.

Ramona was insulted, which she revealed in her confessional interview and later on in the episode during lunch with new Housewife Dorinda Medley. But she didn't say anything to Sonja, although we all know that storm is a-coming.

Oh, and it got much, much worse. Sonja then reminded Ramona that she needs to have her back when they're in the presence of Luann de Lesseps once again since things didn't end great between them last season. When Ramona didn't wipe her tears away fast enough after discussing her divorce, Sonja chided her a bit for not assuring her enough that she will be supportive. Oh, Sonja. Please stop.

During Season 6 of RHONY, we saw some cracks in Ramona and Sonja's seemingly unbreakable bond. Now this season, it looks like their relationship could be the first one to crumble.