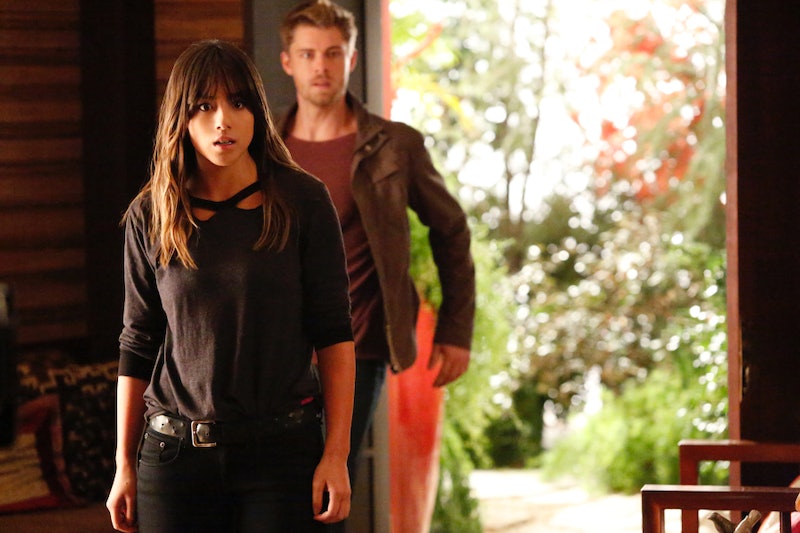 The Inhuman world got a lot bigger and a lot prettier on Agents of S.H.I.E.L.D. when Skye woke up in her new temporary home. The inhuman Lincoln called the Agents of S.H.I.E.L.D. location "Afterlife." However, he said that was just a nickname. The true name, though in Chinese and without a true translation, is Lai Xi. Where is this place? Apparently, nobody knows — not even the people there! The only person who knows is Gordon, who is in charge of taking people in and out.

That said, Gordon seems to be one of the only people there with a job. Everyone else just wanders around as though Afterlife was some sort of spa. They have deep dish pizza parties, kale smoothies and popcorn. What's not to love? It appears to be some sort of Shangri-La or Brigadoon, an idyllic utopia with nondescript architecture that's out of time and space.

We learned that Afterlife is a community for "descendants" with Inhuman potential. Lincoln explained to Skye that her transformation experience is rare for most Inhumans. In Afterlife, humans with the genetic marking wait to be evaluated and selected to unlock their abilities through terregenesis. Many of the Afterlife residents seemed jealous of Skye for "cutting the line" as it were. Lincoln also mentioned that they answer to a group of elders. Is this the Marvel Cinematic Universe's version of the inhuman royal family, or something different altogether?

Gordon refused to tell Skye where her father or Raina were being held and Lincoln gave her a non-answer when asked. We later saw Calvin Zabo in his cell — which like Afterlife, was still pretty well accommodated. As for Raina, Skye figured out pretty quickly that she was being kept in Afterlife too. They also met Skye's mother, which is a whole other can of worms. However, Jiaying needed to be escorted by Gordon to see Cal, so I see that as a sign that he is not in Afterlife with the rest of them.

Wait — are they on the moon? In Marvel comics, the inhuman city Attilan was built on Earth's moon. OK, the mountains in the distance, and you know, whole being able to breath thing, make that unlikely, but until we get some more details, anything is possible.