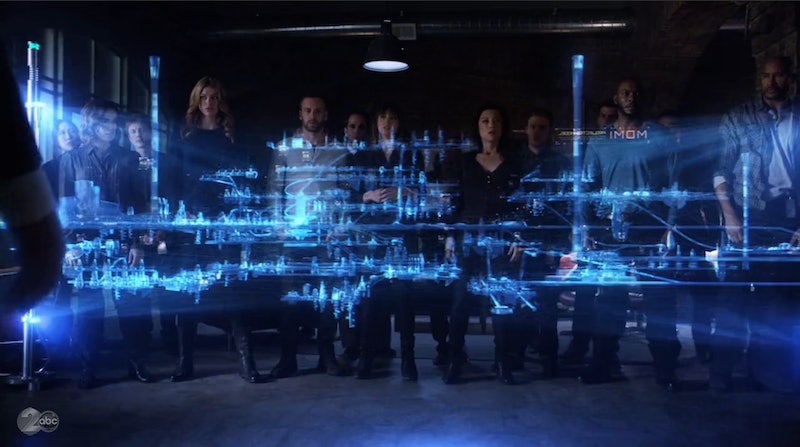 The over-arching mystery of Season 2 of ABC's Marvel's Agents Of S.H.I.E.L.D. has undoubtedly been the purpose of the alien writing that Director Coulson has been compulsively producing under the influence of GH.325 — and that mystery took a giant step toward being solved at the end of the latest episode, "The Writing On The Wall." In the course of that hour, the team discovered that the symbols were meant to be viewed in three dimensions rather than two, and quickly deciphered that it wasn't a language... it was a blueprint, seemingly for an alien city. Of course, in the true nature of serialized television, as soon as one question is answered, another is asked. We now know what the symbols themselves are, but the next mystery is: What the heck is that city?

The most popular theory making the rounds on the world wide interwebs is that Coulson's blueprint is a diagram of Attilan. That word may not mean much to you right now, but if this theory is correct, it will become as familiar to Marvel fans as other made-up words like Asgard. And Chitauri. And Æther. And Groot. (Come to think of it, about 95 percent of the Marvel Cinematic Universe consists of characters speaking gobbledegook at each other, doesn't it?)

So what (and where) is Attilan? Attilan is the ancestral home of the Inhumans. It has no fixed geographical location, but has moved everywhere from the Atlantic Ocean to the Andes to the Moon to New York Harbor. You may recognize Inhumans as one of the titles in Marvel's recently-announced Phase 3 (due in theaters Nov. 2, 2018). Why are some people so convinced that S.H.I.E.L.D. is setting up a plot line tied to a movie that's still four years down the road? It all comes back to that blue-skinned alien Coulson found in the Guest House, the source of GH.325, the drug that saved him from his apparent death in The Avengers.

This alien is most likely of the Kree race, since the Kree are known for their blue skin. (You met a Kree in Guardians Of The Galaxy: the villainous Ronan The Accuser.) Comics lore goes that, millions of years ago, the Kree set up a base on Uranus during the Kree-Skrull War. While there, Kree scientists conducted experiments on some humans, imbuing them with extraordinary abilities, giving rise to — you guessed it — the Inhumans.

What does S.H.I.E.L.D. have to do with the Inhumans? Well, we already know that Skye is part alien. Could her extraterrestrial half be of Inhuman origin? Part of the Inhuman mythology involves a substance called Terrigen Mist, which activates the Inhumans' latent abilities. Before they're exposed to it, Inhumans look like normal people. Could GH.325 be Terrigen Mist? If so, could we be about to see formerly normal Sky develop superhuman powers?

There's one other aspect that may tie Skye to the Inhumans: her father. The Inhumans were led by a powerful man named Black Bolt, who had a younger brother called Maximus The Mad. Maximus attempted to usurp the throne of Attilan, only to be defeated and exiled. What if the exiled madman went to Earth, met a woman and had a half-Inhuman child, and then hid his family away in China's Hunan Province, until the village was wiped out by... vengeful Inhumans? Kree? Some other evil alien force?

In case I lost you on that last theory — yes, I'm saying that Skye's father is Maximus The Mad himself. The villain is described as a mentally unstable genius and inventor who specializes in physics, mechanics, and biology. That could pretty well describe what we know of Skye's dad so far.

It's easy to see why the theory of Coulson's blueprint as Attilan is so appealing: it solves literally every single lingering mystery on the show in one fell swoop. The blue alien, the mysterious city, Skye's father, all answered by Inhuman mythology.

But the question remains: Why Inhumans? And why now? Is ABC really setting up an arc for a film that's still 10 titles deep in the MCU's roster? The answer is: We may be meeting the Inhumans sooner than November 2018. By now, you already know that two of the biggest new characters we'll meet in next summer's Avengers: Age Of Ultron are Quicksilver and Scarlet Witch, twins with superpowers played by Aaron Taylor-Johnson and Elizabeth Olsen (first introduced in the post-credits scene of Captain America: The Winter Soldier ). In the comics, the siblings are the mutant children of Magneto; but since the film rights to the X-Men franchise are owned by 20th Century Fox and not Disney, the Marvel Cinematic Universe isn't allowed to use Magneto — or even the word "mutant."

So how will Age Of Ultron handle Quicksilver and Scarlet Witch? A popular theory when their characters were announced was that, instead of calling them mutants, they would become Inhumans. Marvel Studios President Kevin Feige quickly shot down these rumors; but we all know from the J.J. Abrams/Khan fiasco that filmmakers are not above straight-up lying to preserve their films' secrets.

At Marvel's Phase 3 announcement event, Feige teased the introduction of Inhumans into the MCU well before their own standalone film in 2018. "Where they fit into the universe... you may find out sooner than you expect to, frankly," he said. "With Inhumans, there may be easter eggs starting before you know it." Will those easter eggs include references in Age Of Ultron? Specifically, that Pietro and Wanda Maximoff (the twins' real names), are descendants of the Kree-created race? It certainly makes more sense that S.H.I.E.L.D. would be leading up to events in next May's super-blockbuster, rather than a film that's still four years away.

One of the major complaints about S.H.I.E.L.D.'s first season is that the show was forced to spin its wheels while waiting for the events of The Winter Soldier . Only after that film shook up the MCU could its small screen sibling really get to the good stuff (aka Hydra). It will be refreshing to see S.H.I.E.L.D. for once not playing catch-up with the movies and instead actually helping to pave the way for them. It seems that Feige and the rest of the MCU brain trust are finally taking advantage of their TV show's ability to introduce audiences to new Marvel storylines and then tinker with and develop those storylines before they hit the big screen in full-force.