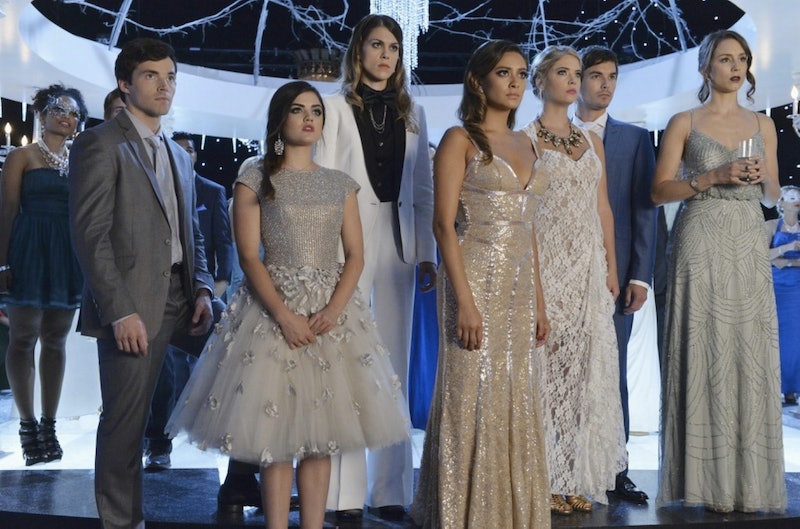 It's been a long, twisted, five-season road for Pretty Little Liars fans. But I'm not just talking about the great A mystery that I. Marlene King has lead us through for 120 episodes, leaving us in A's dollhouse at the end of Season 5. There's so much more to PLL than that. Sure, your theory that Charles DiLaurentis is Jason's twin is a big deal and no one can take that away from you, but the essence of this series is part A mystery, part how strongly you feel about your favorite PLL 'ship. And, just like fans have ridden the emotional roller coaster of every A reveal together, we've also all ridden the super-emotional roller coasters of Haleb and the rest of Pretty Little Liars' main 'ships.

Considering the fact that not a single one of the 'ships has made it through the past five seasons unscathed, it constantly amazes me that none of the couples just sit back and look at each other and say, "How did we get here?" (I'm sure Ezria's forgotten a bit of their own history now that they're on their seventh break up).

To help refresh everyone's memories, we've come up with a series of handy graphs charting our favorite 'ships over the past five seasons of PLL. I mean, King can't expect us to spend all of our time contemplating how Bethany Young fits into the Charles reveal, right? If PLL didn't want us to obsess over our favorite 'ship, they wouldn't make every significant other on the series so damn swoon-worthy.

So, get ready to brush up on the journey of your favorite 'ship, because things can only get wilder from here.

The Voyage Of Haleb

They might be PLL's best 'ship, but the past five seasons haven't been easy for these two — or our hearts.

OK, can we talk about how these two have broken up SEVEN TIMES and Ezra's still punching walls over Aria? They're next level.

If you're looking for a lesson in 'ship resilience, it's Spoby for the win.

The Voyage Of Paily

I think we can all agree that Emily might be better off without this 'ship.

The Voyage Of Emison

It's definitely a relationship buzzkill to think your first love is your ultimate tormentor. But, hey, there's still hope for these two.

The Voyage Of Mike & Mona

So, are these two going to get back together now and give a new definition to "until death do us part"?