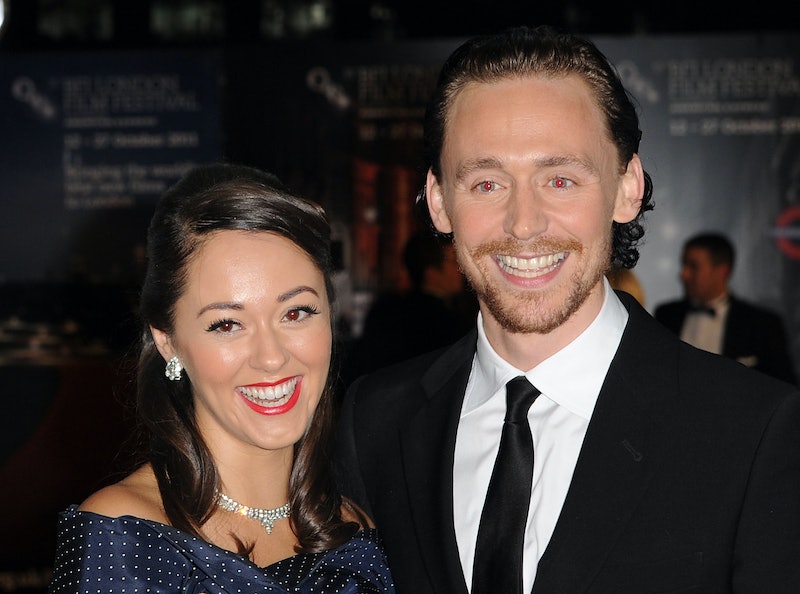 He's quite the romantic man, so it's no surprise that over the years Tom Hiddleston has been rumored to be dating several Hollywood's elite. Most of the gossip has been false, with Hiddleston's only confirmed romance having ended back in 2011. But that hasn't stopped people from hoping he'll eventually get together with one of his co-stars or some other famous actress. Hiddleston's list of rumored girlfriends isn't as long as some celebrities have, but he's racked up quite a few supposed trysts with famous women like Jessica Chastain and Kat Dennings.

Hiddleston understands the fascination with who he's dating (or not dating). After all, he's in the public eye and ladies love him. They want to know if they have any competition. For now, they don't. As far as I can tell, Hiddleston is single and focusing on his career. But when he does find someone — he'll tell us. "One day I hope when there's really something to write home about, then I'll be able to talk," he told GQ of his love life.

But while we wait for him to find that person and write home about her, let's take a look back at everyone Hiddleston has been with, or was rumored to be with.

The British actress met Hiddleston in 2008 on the set of the BBC show Wallander. They dated for a couple of years until they broke up in 2011 when Hiddleston's career became his focus. "Acting just demands everything and if you don’t give it everything, there will be someone behind you who will," he told The Daily Mail of why he put his personal life on hold.

The American actress met Hiddleston in 2010 when they both starred in Thor. Although they didn't have any scenes together in the movie, they bonded during press events. They got a little cozy at times, like at Comic Con when Dennings and Hiddleston were being pestered by paparazzi and she slipped her arm though his. Although, it felt like more of a protective move than a romantic one. I doubt that they actually dated, though, since Hiddleston was with Susannah Feilding at the time.

The Crimson Peak co-stars are friends (he even attended her karaoke birthday bash), and the media seized this friendship to start dating rumors for the pair in January 2013. Despite what the press says, though, Jessica Chastain has been very open about how she doesn't date actors. "I have dated an actor before, at Juilliard, but since then, I've only been on a couple of dates with one and I was so freaked out someone was going to take a picture of us, because they were famous," she told InStyle UK the same month that the Hiddleston rumors surfaced.

In July 2013, Hiddleston was spotted going to dinner with the Sherlock actress which started some dating rumors. But the two haven't been spotted together since, so it's likely they're just friends. Those BBC actors all know each other in one way or another.

The record producer was mistaken for Hiddleston's girlfriend when Elle UK's editor in chief spotted her sitting next to the actor at the 2013 Wimbledon finals.

But Hiddleston effectively killed that gossip with his GQ interview a few months later. He was asked about Arthy, but wrote the rumor off saying he said he'd tell people if he was actually dating anyone.

As long as Hiddleston continues to be friends with girls there's likely going to be many a dating rumor about him. Such is the price of fame, but at least he's not too bothered with the gossip. He's just going to keep living his life, because I'm sure he knows that without added fuel or attention, the rumors will eventually die down.