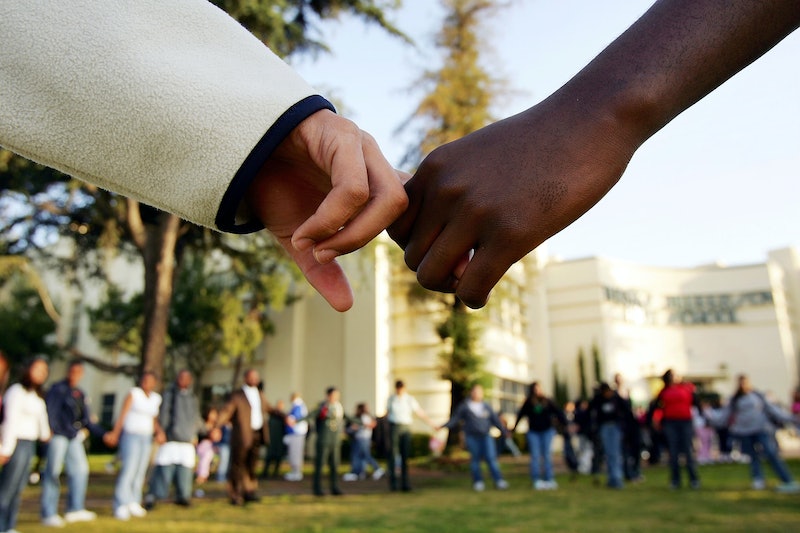 It's definitely not a secret that racism continues to be a huge problem in American society; if we've learned nothing else over the past year, it's that exact lesson. But I would be willing to bet money that most people probably aren't aware that how racist people are — specifically white people — isn't improving over time. According to some data analysis recently conducted by the Washington Post, white Millennials are just as racist as the two generations before them.

Anyone who's thinking, “But that's not me! I'm A-OK!” right now — climb down off your high horse. This is all of our problem, and we seriously need to do something about it. Clearly we've got a lot of work ahead of us if we ever hope to be better people as a whole.

The Washington Post gathered their data from the 2010, 2012, and 2014 waves of NORC'S General Social Survey. The survey asked respondents… well, a lot of things (you can take a look at the questionnaires on NORC's website), but among them were items that required participants to rate people of different backgrounds on scales like “hardworking to lazy.”

Brace yourselves; we're about to open an enormous can of worms.

Have you done your bracing?

It's worth noting that all of the categories did show a marked improvement over what the Silent Generation — those born between 1928 and 1945 believe — but the fact that they've barely changed over the three successive generations? That's troubling. Wrote WaPo's Scott Clement, “Holding these attitudes is not the same as making racist comments in public or even among close friends, but there's clearly an audience for race-based judgment among the Millennial generation.”

But here's the thing: Yeah, thinking these sorts of things may not be quite the same as making overtly racist remarks out loud… but it's still racist, and it's still a problem. In fact, the casual nature of this sort of racism might even be more insidious, purely because it's so covert — something which Jezebel's Kara Brown nailed right on the head in her commentary about it:

“There is this mistaken belief that the racists are people running around screaming 'n-----' or making tacky jokes about Mexicans. Frankly, I would prefer to interact with a person or system with a clear, known bias, as opposed to someone who feels the exact same way deep down but thinks they're not racist. Sure, they might think black people are lazier and dumber than white people, but they totally have black friends of a certain educational class and so like, what's the problem?”

The appropriate response to someone who actually lives by that last sentence is a facepalm:

A facepalm won't stop it from happening in the first place, though. So what will?

Obviously I do not have an easy solution. What I think we need, though, is to realign how we think about racism. We can't let ourselves off the hook when we find ourselves saying anything to which the phrase “I'm not racist, but...” could be added. We need to hold ourselves responsible for it. If we find ourselves trying to make excuses for ourselves as to why this racist thing we're saying totally isn't racist, we need to call ourselves on it. It is racist. Full stop.

The first step to fixing a problem is becoming aware that it's a problem in the first place. So let's buckle down and do it. It's long overdue.