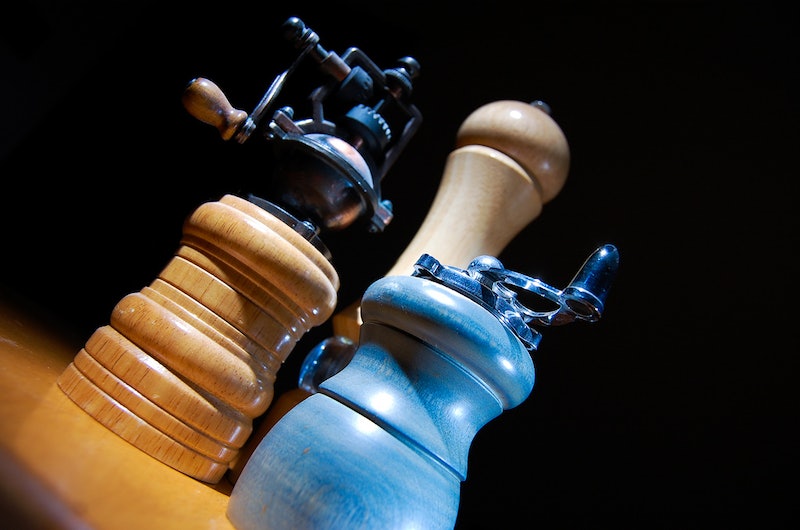 Since we first learned of that magical little device known as the Dolmio Pepper Hacker — you know, the fully-functional pepper grinder that also has the ability to shut down all electronic devices within its reach — we haven't been able to get enough of it. But one question still remains: How does the Dolmio Pepper Hacker work? As the Telegraph noted, the device actually isn't quite as magical as it sounds — mostly because you have to put in a little bit of work before it will perform its intended function. Here's the deal according to Australian site Mumbrella:

First, there's a central control box that acts as a relay between the Pepper Hacker and all the devices you want it to be able to shut down. From there, the control box has the ability to communicate with the devices via two different methods: An SMS gateway for wireless and mobile devices and a signal to toggle the power for any electronics powered by a wall outlet. The wall outlet part is easy; all you have to do is make sure those devices — televisions, modems, routers, and whatnot — are plugged into what Pepper Hacker creator Brendan Forster calls the “home automated switch.” For mobile devices, you have to get a little sneaky: For the Pepper Hacker to work on them, they have to have a type of remote management software called AirWatch installed on them (good luck getting your phones away from your kids to perform the installation). Said Forster to Mumbrella, “Think of it like as when you're at an organization — they install a profile on your phone so that they can back up information or allow authorized apps. We've used that in a really creative way.”

Once you've got all that set up, though, all you have to do is twist the Pepper Hacker. When you do, it will relay through the control box; toggle the power off for the home automated switch, thus shutting down any wall outlet-powered devices; and send an SMS command to mobile devices with AirWatch installed on them that removes all non-native apps. After 30 minutes are up, the power will come back on and all mobile apps will be reinstalled. Voila!

If all that sounds a little confusing, maybe a picture will help. Mumbrella has a diagram that shows how the Pepper Hacker works, so head on over there to take a look. Alas, it's not for sale; these similar devices are, though. And in the meantime, why not amuse yourself — or perhaps flabbergast yourself — by watching that video showing the device in action again? I still can't get over how many tantrums were thrown the moment all the devices shut down. Seriously. Let this be a lesson to us all that we could stand to unplug ourselves a little more than we usually do — each and every one of us.