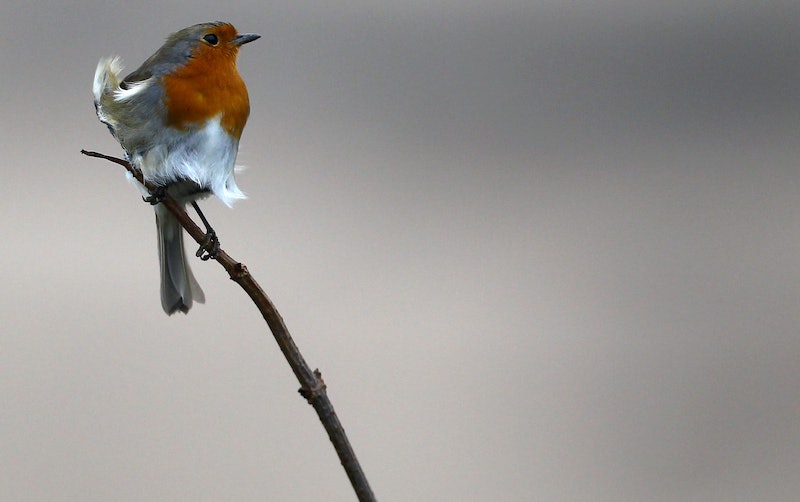 To be honest, I've been preparing for the day that our robot animal overlords take over the earth for a while now. I've watched sci-fi movies, so I already know that we ultimately all go down in a blaze of fiery glory when technology betrays us and the animal kingdom rebels. I guess I just thought we had a little more time, but now that I've seen this bird that sounds like a computer, it seems that their plans are evolving much faster than we could ever anticipate. We've finally reached the doomsday scenario, everyone. Eat all the Nutella that you can and pray for mercy.

The bird in question lives in Brazil, so you might have a little bit longer to live depending on your distance from there. I tried to look up what kind of bird it was based on its color features, but nothing definitive popped up (which makes sense, given that this is clearly not a bird but a demon robot). The noises coming out of it will give you horrible '90s flashbacks to your dial-up modem, or possibly that very outdated computer game you got caught playing in fourth grade the one time your teacher gave you access to the school's one coveted old-school Mac.

This is the bird in question, who looks cute and innocent enough, right?

WRONG. Watch it in action and you'll see for yourself:

Bet you wished you had a spot in the underground bunker I'm building now, huh?! Well, don't worry, I'm willing to make room. As long as your name is Andrew Garfield and you're a tall sexy British cup of tea, that is.

Anyway, now that I've appropriately scared you all pants-less about the oncoming apocalypse, I'm also here to remind you not to give up hope. I took a quiz once about my odds of surviving in the event of a zombie outbreak, and I got twenty-four whole hours! I'm basically a survival expert. Here are all the things you can and should do in the event of animals taking over the earth:

Preferably while listening to an angsty cover of "It's The End Of The World As We Know It". BONUS POINTS if you or someone you know backs you up playing guitar while you warble the words out yourself.

I mean, come on, it's not like you were going to make it on a plane flight to Paris to live out your end-of-the-world travel fantasies. The demon robot animals probably wrecked all croissant shops by now anyway.

3. Eat everything in the pantry

If this sounds like a ~typical Tuesday night~ for you (HAD to sneak in the Taylor Swift reference; it's a sickness), then good. You should go out in a blaze of lazy night glory. Honestly, where would you rather be? Happiness is simple. Happiness is a warm laptop and DiGiorno pizza crust dipped in butter. Don't complicate this.

4. Take a nap and wait for death

If you can find someone to bang, good for you! But if you can't, I'm sure there's plenty of banging in whatever happens after we die.

Damn, I should write a survival book. You're all welcome.