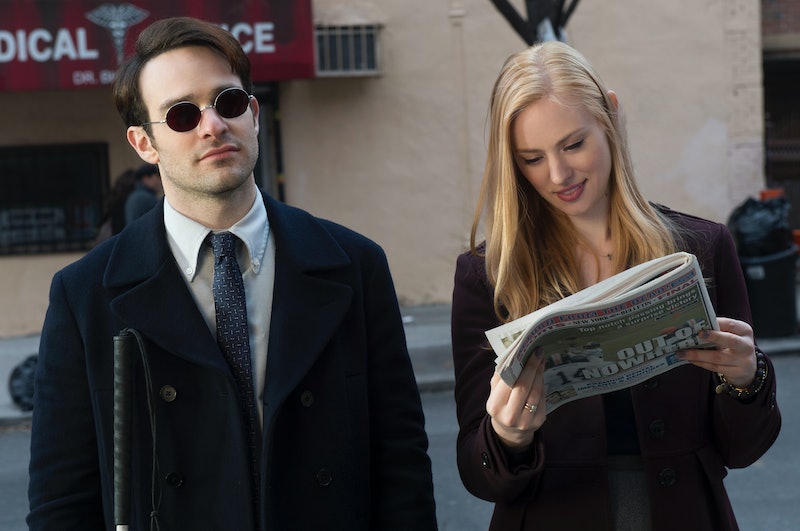 Marvel television has been great for women: We've got amazing ladies on Agents of S.H.I.E.L.D., Agent Carter, and A.K.A. Jessica Jones to look forward to next year. Netflix has been great for women: We've got Claire Underwood on House of Cards and virtually everyone on Orange Is The New Black. However, the new Netflix series Daredevil has some problematic female characters. Superhero origin stories like are so iconic that it makes it easy to recognize a bad trope, and Daredevil feels a little bit like a step backwards.

For starters, the pilot is heavy with violence against women. The series opens with adult Daredevil rescuing a group of young girls who are being sold into a prostitution ring. Then Karen Page, played by True Blood's Deborah Ann Woll, is attacked multiple times. And I mean more than twice. The man who attacks her was doing it when his young daughter was threatened by the big bads. What gives? Why do we need to keep putting women, specifically, in danger to motivate male characters for good or evil? After Matt Murdock and Foggy Nelson save Karen from physical attackers and corporate ruin in the courtroom, she cooks them dinner and offers to spruce up their office and work with them as an assistant. Ah, a "woman's touch." Karen also offers to work for free, which is where I draw the line. Get paid, girl! She is literally leaning back.

Karen is like the Breakfast Club of bad tropes for female characters. She's a victim, and a secretary, and a love interest. It's clear that Foggy likes her, but from the first few episodes it seems that she might be more interested in Matt and/or Daredevil rather than his partner. Foggy's flirtation is strange and almost borders on sexual harassment as well. At times I like the characters together, but something feels off.

Luckily, Rosario Dawson's character, Claire Temple, is less of an issue. She is a nurse who saves Matt Murdock and helps to patch him up on multiple occasions. (She's also Matt Murdock's love interest, which I'm not totally against.) They have excellent chemistry and their scenes are some of the most enjoyable on the show — they are the basically the best actors in the bunch. Claire is also honest and real with Matt which is pretty refreshing.

But beyond that, Claire's skills also set her apart. She's essential. She puts a halt on their budding relationship because she's worried that Matt is becoming too much like the bad guys he goes after. Hers is a different angle on the typical superhero/love interest relationship, and I like it. It's also worth mentioning that Claire doesn't suffer from any stereotypes that specifically plague women of color in media.

However, Claire does become a damsel in distress in the fourth episode. Matt regrets involving her in his vigilante adventures because he doesn't want to hurt her. That's the oldest, eye roll-y trick in the superhero book. Let Claire be great, Daredevil!

But in a big picture sense, this also means that all three of the main female characters can be defined by their romantic connection to a male character. The third woman I'm talking about is Vanessa Marianna, who is being courted by Wilson "The Kingpin" Fisk. Only Madame Gao, a minor character and drug dealer, is not defined by a man in the way the other three are regard.

But despite my misgivings, I'm going to keep watching. I admit that it's easy to jump to conclusions and that it's difficult to get female characters "right" after decades of ways to get it wrong (in ways that often contradict one another). I love both Deborah Ann Woll and Rosario Dawson as actresses and look forward to seeing Karen and Claire grow as the series progresses. Here's hoping Daredevil hears my cry.