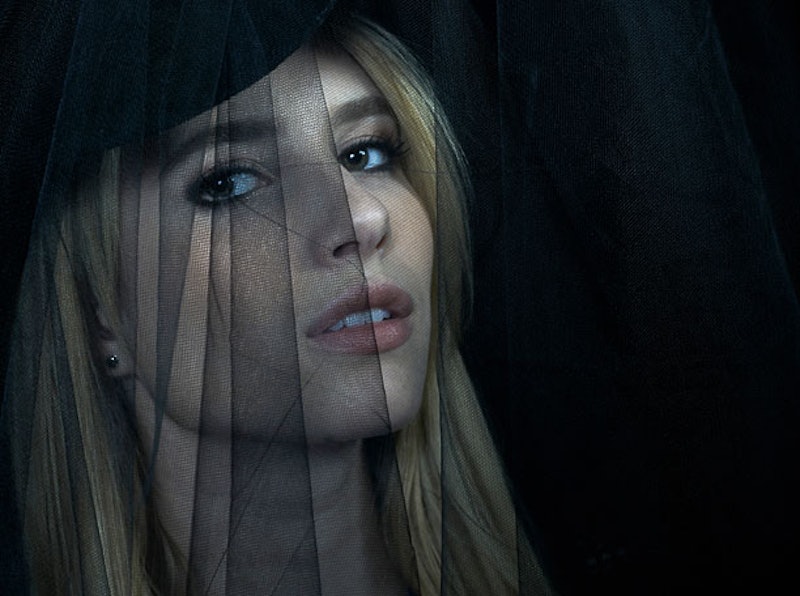 When American Horror Story: Coven first began to reveal its more sexual plot lines, we were perplexed. When we only had the issues of Zoe's deadly teenage sex and the slightly predatory nature of Jessica Lange’s Fiona when she seduced her doctor and then sucked the life out of him with her kiss, women’s sexual freedom was not looking so hot. Now, in episode three, sex and power are running through the veins of every woman on the screen and some meaning has become a bit more clear: AHS is opening the idea of a woman in control of the sexual power dynamic and exposing it for the varied, complicated truth it really is.

Sometimes that power is ugly; sometimes it’s empowering; other times it’s heart-breaking. But it’s always a unique expression of each character’s personality, rather than a series-wide depiction of a stock femme fatale or worse, the sad, desperate woman we’ve met in so many Lifetime movies. As it is in life outside of media representation, women with sexual power are not all created equal.

Of course, it took AHS a few episodes to get here. At first, it appeared that we were headed for a season about an older woman looking solely for youth (Fiona) and a young woman learning a harsh lesson about the dangers of sex (Zoe and her deadly vagina). Those two factors alone were unpromising; one was a sexist stereotype and the other a condescending adage to help teens keep it in their pants. By episode three, though, the complications and side plots are running wild, like some sort of horror-themed episode of Glee gone right, and things finally start to make sense.

We’re introduced early on to the idea that not all of the teenage girls in the house are virgins. Nan (Jamie Brewer), who cool girl sexpot Madison (Emma Roberts) callously lumps into the virgin club because of her Down Syndrome, reveals she’s had her share of lovers. Nan fulfills the promise of representing a character with DS who’s not limited by others’ perceptions of her; in this brief scene, she defies the notion rampant in many cultural depictions of a character with DS that she is somehow “other.” She’s not; she’s just a girl (who happens to be clairvoyant and a member of a coven).

There's no shortage of proof that fat-shaming and the heartless disregard for women's feelings is a very real, very dangerous thing, and we see this demonstrated by Madame LaLaurie (Kathy Bates) who tells Queenie she’ll never find a man if she doesn’t stop eating. It's no wonder this instance of fat-shaming is the set-up for the Minotaur seduction. And while technically, Queenie is the more predatory being here (until the Minotaur covers her mouth and the scene goes black), she’s not a textbook depiction of a sad, lonely woman grasping hopelessly for sexual attention. She’s a multidimensional human with complex emotions and reasons to seek sexual comfort, and not just a cheap, tawdry thrill.

On the flip side, we have Madison and Fiona, who may as well start the day with a bowl of weak men instead of Wheaties. They are man-eaters, and while in Fiona’s case that tendency can tend to look a little like an attempt to grasp one’s fading youth, we quickly find that Fiona’s been like that since she was Madison’s age. For the Supreme witch and the young woman who would have followed in her footsteps had Fiona not killed her at the end of the episode, sex is not about youth or self-worth, it’s about power.

In fact, Lange’s Fiona isn’t often found looking in the mirror, trying to lift her drooping eyebrows or smooth out her wrinkles. She’s complaining that she feels weak and that she’s deteriorating; she’s losing her power. And Madison, who Fiona watched as she became the main attraction to every man in some sleezy New Orleans bar, has that power — it's Madison's power that drives Fiona to kill her, not jealousy of her youth. In this way, sex is just another form of predatory magic, like lighting someone’s drapes on fire or flipping a bus. It gives Fiona and Madison (R.I.P.) the ability to be powerful women without sex being their only weapon like so many typical femme fatales.

But it’s not all good. As in any discussion of sex and power, there are dark corners. Zoe (Taissa Farmiga) believes she’s doing the right thing by returning Franken-Kyle (Evan Peters) to his mother, but as it turns out, the reason Mrs. Spencer has gone so insane over the loss of her son is that she is an incestuous sexual predator who sees Kyle as her property. After multiple uncomfortable situations in which Kyle’s mother deliberately walks in on him in the shower, lies with him and reaches her hand into his pants as he cries, and later thrusts herself backwards towards him as she wraps his arms around her, it’s clear that Mrs. Spencer is a mentally ill sexual predator. She too has power, but it stems from a very sinister place.

It’s this depiction of a mentally-depraved sexual predator that pop culture tells us is reserved for men. Women sexual predators are generally along the lines of a Mary Kay Letourneau (the teacher who fell in love with her teenage student and later married him) and as a recent New York Times editorial points out, we’re socialized to believe that women aren’t sex offenders due to the admittedly small number of cases involving women administering sexual abuses. With a character like Mrs. Spencer, AHS offers a shocking, yet equal opportunity depiction of sexual behavior in women, and unfortunately, not all sexually powerful women are people we'd ever want to admit exist.

It's clear that "sexual power" is not a one-size-fits-all descriptor. We have Nan, who has an average, healthy view of sexual activity that amounts to “I like boys and they like me”; Queenie, who struggles with a lack of love and the connection between love and physical contact; Fiona and Madison, who see sex as a weapon in their bags of powerful tricks; Zoe, who’s seen the adverse effects of sexual activity and becomes fearful as a result; and Mrs. Spencer, who’s a fully disgusting sexual predator whose gruesome death is barely irksome because of how much pain she’s brought her son.

AHS’s depiction of women and their varying relationships with sexual power isn’t pretty. It’s not something you’d want to have emblazoned on a flag for parades and socio-political lawn decorating, but it serves one very interesting purpose. This depiction opens up a discussion around women and sex that doesn’t rely on the tattered old cardboard boxes we’ve been slotting girls and women into since sex became an acceptable topic on television (the slut, the desperate older woman, the prude, etc.).

These story lines allow for sex to be a huge part of these character’s lives without being the defining factor in their existences (unless they're Mrs. Spencer, who we've established is important for another reason). And isn’t that all we’ve ever wanted from sexually-active women on television? An acknowledgement of sex without allowing it to become someone’s only quality? At the end of the day Queenie’s main goal is love; Fiona’s is power; Zoe’s is knowledge and understanding.

Yes, sex factors into their lives because like the rest of us, they’re biologically wired that way, but when the supernatural dust settles each and every one of these women is simply a human dealing with issues as real as the audience on the other side of the screen, and that's an achievement with significant power.